While researching Eugene Cook in New York and New Jersey in the 1800s and 1900s, I come across his doppelganger.  Eugene Everett Cook.  They were born about twenty years apart and seem to have no blood relation.  On my most recent trip to Trenton, I was not even looking for this other Eugene Cook and poof- I came across his death certificate.

Posted by Jody Lutter at 7:58 AM No comments: Links to this post

Email ThisBlogThis!Share to TwitterShare to FacebookShare to Pinterest
Labels: coincidence

I came across this death certificate and attached note and did not want this woman to fade away completely. 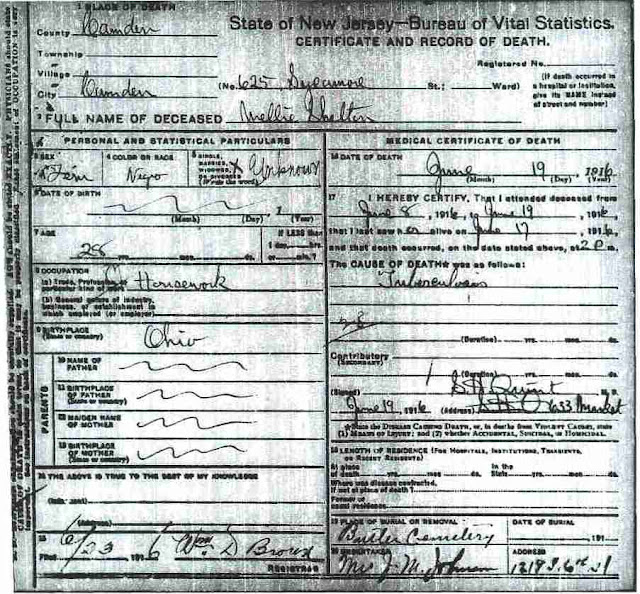 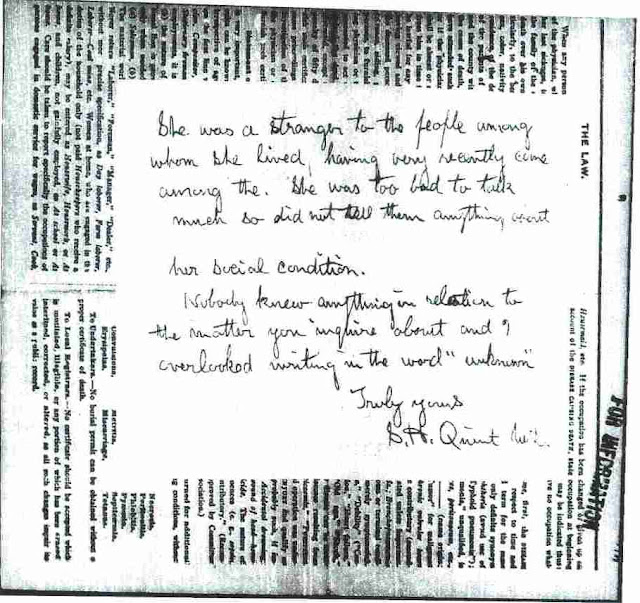 "She was a stranger to the people among whom she lived, having very recently come among them.  She was too bad to talk much so did not tell them anything about her social condition."
"Nobody knew anything in relation to the matter you inquire about and I overlooked writing in the word 'unknown'."
Truly yours,
S. H. Quint [illegible]
Posted by Jody Lutter at 2:17 PM No comments: Links to this post

"Delia's mother was holding her by the train tracks when a train came along, caught her mother's skirts, and dragged her to her death.  As she was being swept away, she managed to throw the baby at a crowd on the platform, and a man safely caught the baby."  This story was told to us for years, with slight variations.  I always wondered how I could find a record of it.

Delia Joyce married Patrick ODonnell around 1887.  They are buried together at Holy Name Cemetery in Jersey City, Hudson County, New Jersey.  Her dates are listed as 1862-1929 on her gravestone.  She first appears with Patrick in the 1900 census in Bayonne, Hudson County, New Jersey, born in New York to Irish parents.  There are not many Joyce families in New York in the 1870 and 1880 census, but several had a girl named Delia, making it impossible to decide which was the correct family.

I had the opportunity to show some old photos to an older relative.  I had this photograph of a woman suspected to be Delia Joyce ODonnell. 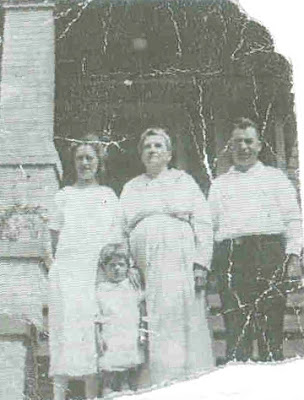 The older relative confirmed that the woman in the center was Delia.  "She was the baby that her mother threw as she was being dragged by the train."  And she was able to recall the location:  Pawling.  Delia was not looking at the camera because she was blind.


Armed with a location, I found the Joyce family living in Pawling, Dutchess County, New York in the 1870 census.

The eight year old Adelia was Delia, the "baby" thrown by her mother to escape death.  The problem with this finding is that Delia could not have been a baby when her mother died because there are two more children born after Delia.  By Irish luck, Delia's mother died during the census year, so she turns up in the mortality schedule for us to easily find 140 years later.

The first number, 21, matches the families.  Mary Joyce, age 35, of Ireland, died in May of 1870, "Run over by cars Railroad."  This confirms that I have the correct family.  The remaining issue is that Delia was not a baby when her mother died, so either the story should have been "Mother throws small child to safety" or the rescued baby was not Delia, but rather a younger sibling, perhaps John or James.

Able to make the match to Dutchess County, I found a descendant of Patrick Joyce by his second wife.  Patrick remarried and had more children.  They too had heard the same baby and train story.
Posted by Jody Lutter at 7:47 AM 2 comments: Links to this post

Still searching for relatives at 23andme.com

Since last week, when my DNA results became available at 23andme.com, I have been connecting with distant (very distant?) relatives and trying to figure out the common ancestor.  I am up to 990 matches in the database.  So far, I have not figured out anyone's relation to me.  The website allows you to request contact of only five people per day.  I started with my closest relation- one third cousin- and am working my way outwards.  Only twelve people have responded to my inquiries.  A fourth cousin hails from Latvia- and I have no clue how this happened.

Apparently many people took advantage of the $99 sale in December, creating a lot more matches, as well as a lot of people who are clueless like me.  A group formed on facebook to share advice and opinions.

At this point in the DNA search, I think it is best to have my parents submit their specimens.  This will probably turn up a lot more matches, as each provided me with only half of their DNA.  When I have the matches of each parent, I will at least know which tree holds the common ancestor.