What became of George D Russell is no longer a mystery. In 1946, he returned from service in World War II to his home in Forest Hills, Queens County, New York. I could not find him after this date- until now.

George died in 1997 and was buried in Saint Charles Cemetery in East Farmingdale, Suffolk County, New York. (As of this writing, the picture of the gravestone on the FindAGrave page is not his, but rather another person of the same name in the same cemetery. There are many men named George Russell; hence, narrowing them down is challenging.)

About five years ago, George D Russell became a person of interest in my family's history. The reasons will not be divulged at this time. See my prior posts here and here.

Among the little information I received about George was:

Limited information was available. At Fold3.com, this serial number was indeed used by George D Russell, born in 1914. He enlisted in New York City on May 24, 1943 and was married or single, depending on which extraction is viewed. 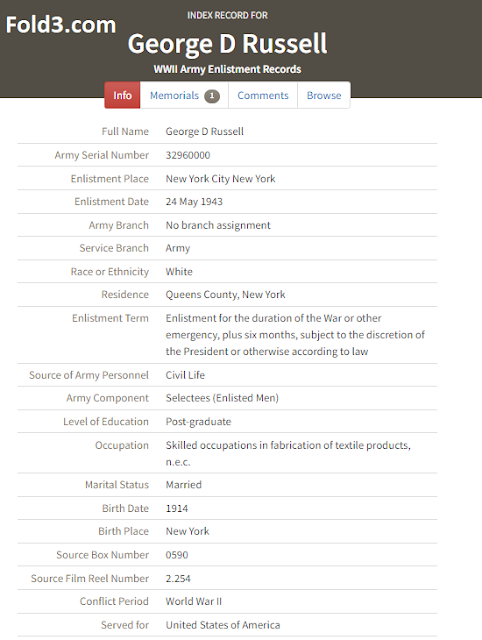 I ordered the file for this veteran. The service records for World War II were destroyed in a fire. The only surviving document, according to the National Personnel Records Center, was George's final payment voucher, which I promptly requested. No date of birth was on the voucher; but George's signature was. The address in Forest Hills was the same address I was originally provided. (The correspondence and voucher are below.) 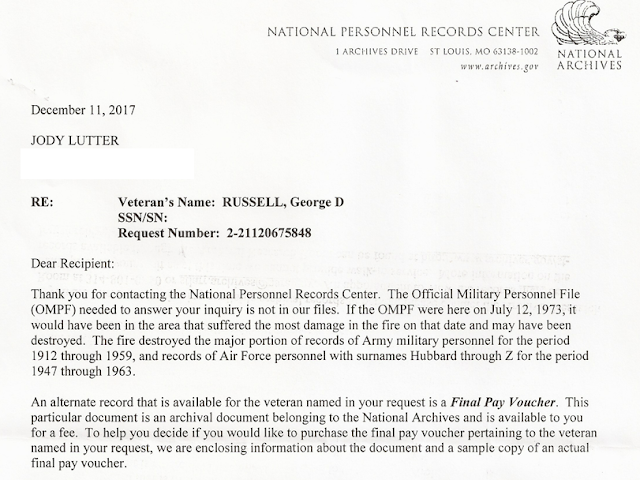 Unable to quickly find George, I made a family tree of men named George Russell and D Russell who lived in New York and New Jersey and were born around 1914.

When the draft registration cards were published on Fold3, I analyzed all and found no definite matches for the signature. No number on the draft card corresponded with the number for George of Forest Hills.

I tried other techniques, such as searching for the address in newspapers and city directories. When the 1950 census was published earlier this year, I viewed the inhabitants of this address- an apartment building by then. No Russell family.

A few weeks ago, Ancestry's shaky leaf feature signaled that records needed reviewing. The leaf suggested that George of Forest Hills was George Deforest Russell of Malone. I had looked at this George, but did not think he was a match. First, he lived in Malone, New York. This is in Franklin County, just south of the border with Canada. This is about 350 miles north of New York City. Second, the signature on his draft card did not match the signature I had on the final payment voucher. 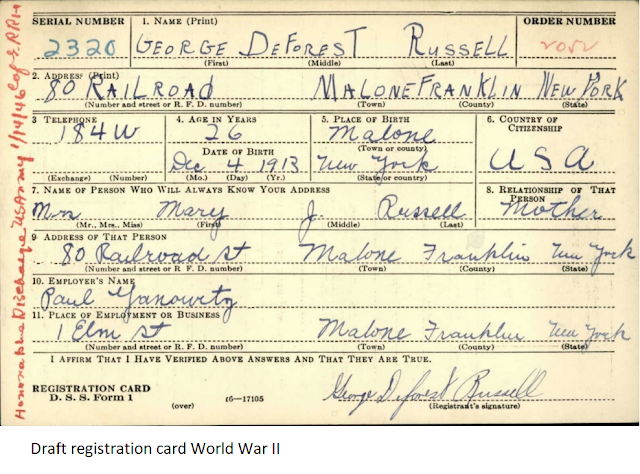 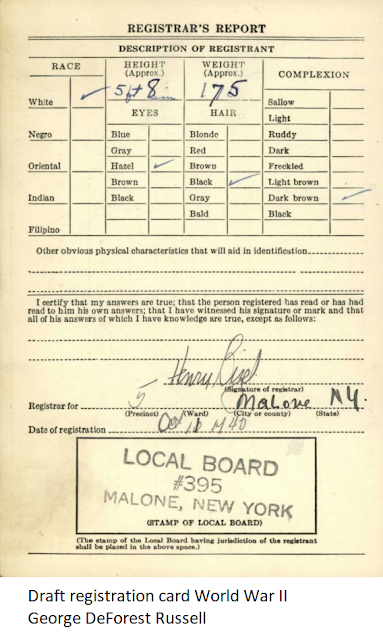 In light of Ancestry's leaf, I reviewed the little documentation on both men named George and found a commonality, other than the name. According to the red writing on the side of the draft card, George Deforest of Malone was discharged from the Army on January 14, 1946- the same day on the final payment voucher of George in Forest Hills. 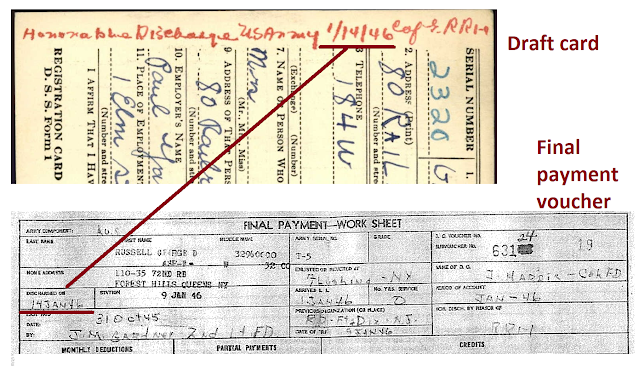 With no other leads, I reviewed George Deforest Russell again. He was born December 4, 1913 in Malone, New York. He died in Norwalk, Fairfield County, Connecticut on November 24, 1997. According to his obituary, he lived in New Canaan, Fairfield County, Connecticut and East Hampton, Suffolk County, New York.
At some point he relocated from northern New York to the target geographical area- but when?
On November 10, 1951, George Deforest Russell married Eleonora Albina Vercelletto in Yonkers, Bronx County, New York. Older birth, marriage, and death records for New York City (Bronx is one of five counties comprising New York City) are online. 1951 is too recent as of this writing, so I ordered it from the City Clerk. (The processing time was two weeks. The cost was $15.)

I had hoped to see another version of George's signature for comparison to the final payment voucher. I was disappointed that this document did not include the signatures of the bride and groom; however, I got a more important clue. George was previously married. 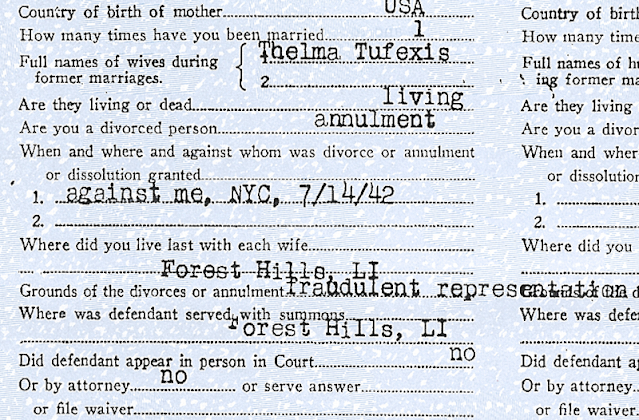 George was first married to Thelma Tufexis. This marriage was annulled in New York City on July 14, 1942. The action was against him for fraudulent representation. (As far as I know, New York City seals divorces and annulments for 100 years, making this record unattainable as of this writing. If anyone knows otherwise, kindly comment below.)
George Deforest Russell married Thelma Tufexis at Our Lady of Mercy Catholic Church in Forest Hills, Queens, on October 26, 1941. This marriage record is online.
This record provides George's signature, which looks like a match to the final payment voucher. More importantly- the address on this marriage record matches the voucher: 110-35 72nd Road, Forest Hills. The year of birth is off by one. 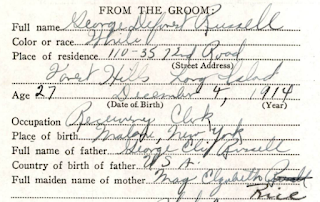 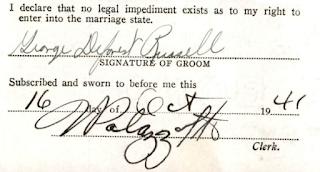 A note on Thelma Dorothy Tufexis: she was the daughter of John Tufexis of Greece and Irene Fayette. She was born in 1916 in Malone, during her mother's first marriage to William Betters. Note the witness Anna Zdyrko of Brooklyn. Thelma appears in later records as the wife of Nicholas Michael Zdyrko, though I found no marriage record for them. Thelma's first child was born in 1943.

It appears that George D Russell of Forest Hills and George Deforest Russell of Malone are the same people. Perhaps George registered for the draft again when he moved from Malone to Queens around 1940 or 1941. This second number was used for his service, but somehow the first card was located and notated with the service information.

Posted by Jody Lutter at 5:27 PM No comments:

While scrolling through the online collections of the Montclair Public Library (Essex County, New Jersey), I found a picture of the gravestone for William Lowry Lyman, Jr. No details, such as a cemetery, were provided.

The Lyman family plot is in Mount Hebron Cemetery in Montclair. 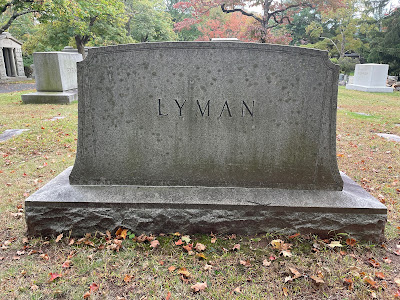 The stone from the photograph was in this plot. It is a flat stone, still fully readable. 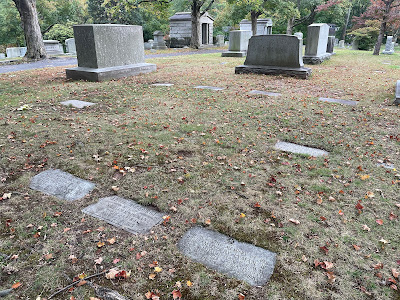 William registered for the draft on June 30, 1942 in Montclair. He was 19 years old. (You can view these cards in Ancestry.com's collection, United States World War II Draft Cards Young Men, 1940-1947.) 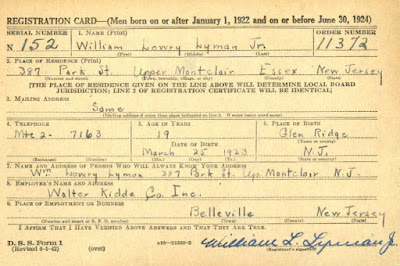 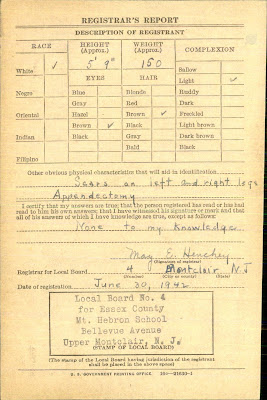 The first article I found about William appeared in the Montclair Times on September 9, 1943. He was reported as Missing in Action. He was a cadet in the Merchant Marines. His ship was sunk during the Invasion of Sicily. His picture was printed next to the article. 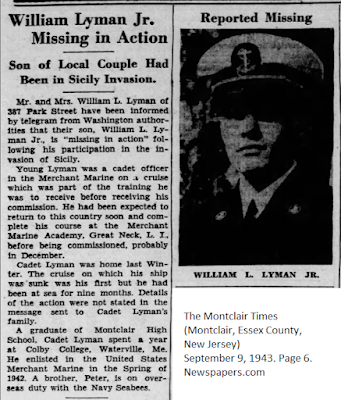 On September 30, an article referred to William as one of four who had made "the supreme sacrifice." 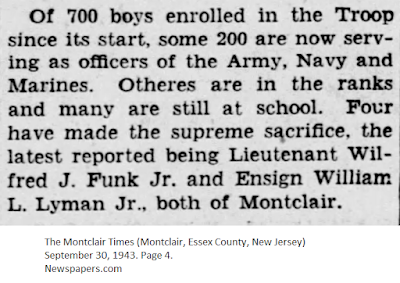 One November 11 (Veterans Day), William was listed as "missing." For Decoration Day (now known better as Memorial Day) of 1944, May 25, William was listed among those dead from World War II.

What may have happened was the William was onboard a ship that was sunk on July 13, 1943. His whereabouts were initially unknown. As time passed, he was not located. This could be how this date became his date of death.

Posted by Jody Lutter at 2:21 PM No comments:

The index of marriages for New York City and New Jersey at Ancestry is a great help to researchers. Many people living in northeastern New Jersey crossed the Hudson River into New York to be married.

The first marriage was performed at a church, perhaps Grace Church. The specific location of the second marriage is not written, but the officiant was Elliot White of Grace Church in Newark. It may be possible that the couple undertook a religious ceremony and a civil ceremony; however, repeating and registering the second ceremony was not necessary because the first union was recorded.
This is not the first duplicate marriage I have found. See this post for the two marriages of Peter Romain and Lucretia Daily, in 1885 and 1890, both in Newark, New Jersey.
If anyone has any insight into marrying twice, please leave a comment. Is there any significance to the two ceremonies being a day shy of one year?

Research Note: To obtain these images, you can visit the New York City Department of Records and Information Services ["DORIS"] online and search or browse. View and download for free. New Jersey marriages are housed at the Archives in Trenton. You can search for free in person and copy for fifty cents. Or you can order online for $10.
Posted by Jody Lutter at 1:16 PM No comments: