On this POW-MIA day, let us remember a soldier from the Civil War.

Joseph B. Henley has a gravestone at Cypress Hills Cemetery in Brooklyn, letting the viewer know that he died in 1864 at Camp Ford, Texas. 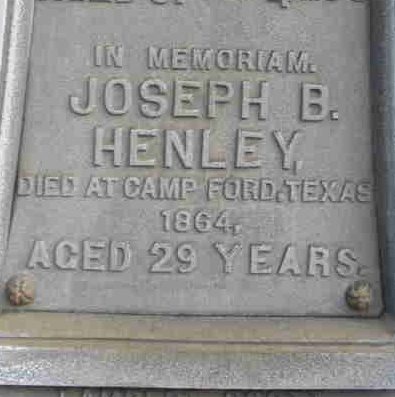 Joseph Henley appeared with his wife and children once in the federal census in 1860, just before the war.  He was enumerated in Jersey City with his wife, Elizabeth (nee Duryea), and their sons, Frederick, age 5, and Augustus, age 1.  They were living with Elizabeth's mother, Sarah Scott (nee Moffit), and her stepfather, Joseph Scott.  Joseph and Elizabeth had at least two more children, Lambert and Florence.  Both died as babies.  Florence died 21 October 1864.  I wonder if Joseph received word of his baby daughter's death before he died the following month.

Several websites offer information about Camp Ford, such as Texas Beyond History.  Joseph Henley is not among the dead listed on such websites.  I found a book citation  for Joseph B. Henley, stating that he died 24 November 1864 at Camp Hempstead.  He served with Company A of the NY 165th Volunteer Infantry, also known as the Duryee Zouaves.

﻿
﻿ ﻿ ﻿ Joseph B. Henley also does not appear on websites for Camp Hempstead or Camp Groce.

On the 1890 veteran's schedule, Joseph's widow, Elizabeth lists him as dying in prison at Camp Ford in November 1864; length of service- three years.

﻿
﻿ ﻿ ﻿
From this, we can wonder if Elizabeth was ever told the exact date of her husband's death.  We may also wonder when and how she found out that he had died, since mail service was unreliable.  Did she believe the news, or come to accept it when he did not return from war?  I doubt that his body is really buried in the plot where his gravestone lies in Cypress Hills Cemetery, hence the "In Memoriam" above his name.  When soldiers died at these camps, their bodies were not sent back home for burial in the family plot.  Joseph B. Henley was likely buried in an unmarked grave at one of these prison camps.
Posted by Jody Lutter at 12:48 PM