James Kittson, where are you?

I am still trying to track the Kittson family mentioned in the will of Herman Lutter, probated in 1924 and mentioned in a previous post.

Gussie Kittson was a niece of Herman Lutter.  Figuring that Gussie has long passed, I have been attempting to find any living descendants of hers.  In the 1920 census for Harrison, Hudson County, New Jersey, she has one son, James, five months old.  In the 1930 census, she still has only one child, James, aged ten years.  The 1940 census is not available yet.  So what happened to James Kittson, born about 1920?

In the online Social Security Death Index (available from various websites), there are two potential matches for James Kittson, born about 1920.

I favored the first James Kittson because of the New Jersey location.  I visited the Montclair Public Library for the obit from the local paper, The Montclair Times.  No mention of James Kittson.  (Thank you to the librarians for searching and searching for him- in several places!)  To be extra thorough, I manually searched the microfilm of the Star Ledger at Montclair State University.  No James Kittson.  Whether or not I have the correct James Kittson, I find it strange that I find no obituary.  (And if I am ever under surveillance, my watcher would find it strange that I go in and out of libraries, courthouses, and churches all day.)

Next I visited Trenton and found the birth certificate for James Kittson- under the name Kitzens. 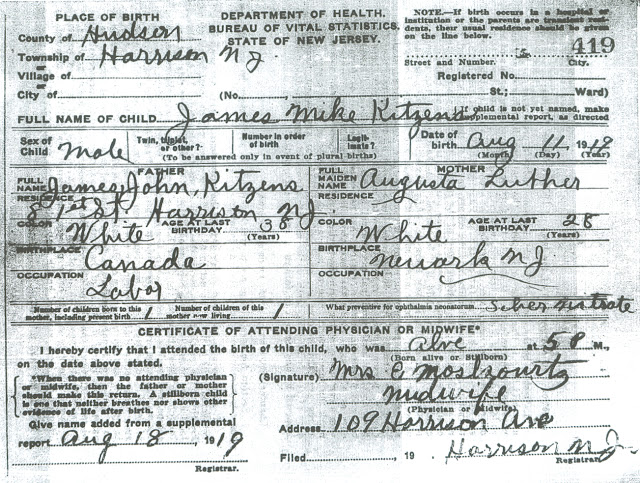 The birth date, 11 August 1919, confirms that the first James Kittson in the death index is the James Kittson that I am looking for.  This person died 21 September 2003.  So where is the obituary?  Did he marry?  Have children?  Will I find living descendants?  The search continues . . .
Posted by Jody Lutter at 6:13 PM