If you had Catholic family living in Hudson County, New Jersey, or even New York City, in the late 1800s through the 1900s, you need to check the burial records for Holy Name Cemetery.  Older death certificates refer to this cemetery as “Hudson CCC” or “HCCC,” which stood for Hudson County Catholic Cemetery.
According to interment.com, there are over 264,000 burials at Holy Name.  You can view close to 20,000 of these burials at FindAGrave.com.  Plot cards are available on microfilm through your local family history center.
The cemetery is well maintained with an office on site, active groundskeepers, and current burials.  Locating a plot can be confusing because several sections seem to have the same lettering system.  This could be because more than one cemetery originally occupied the grounds now called Holy Name.  (If anyone wants to send me a reliable link about this, please do.)  I found a detailed map on one of the microfilm rolls that is useful in determining the correct section.
﻿

In the above listing, the women named Catherine O’Donnell in plots A E 79, M 65 A, A 458 No, and 6 A 129 are not buried with or near one another.  You can imagine how confusing this becomes.
After discovering your plot of interest, the next step is to look up all burials in that specific plot.  Using the Catherine O’Donnell buried in grave A E 79 in 1921, we can find additional burials not named O’Donnell, as well as the grave owner.  We find that a woman named Mary Lee, age 58, was buried in the plot in 1876, as well as a baby named George Bundschub in 1877.  The owner was Edward O’Donnell.  Finding out all of the burials in a plot, even if they do not share the last name of your original inquiry, is necessary to map out a family.
Good luck using the above map to locate the grave! 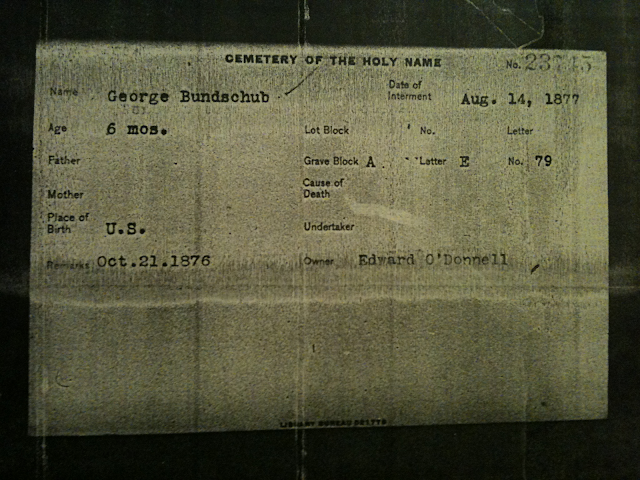 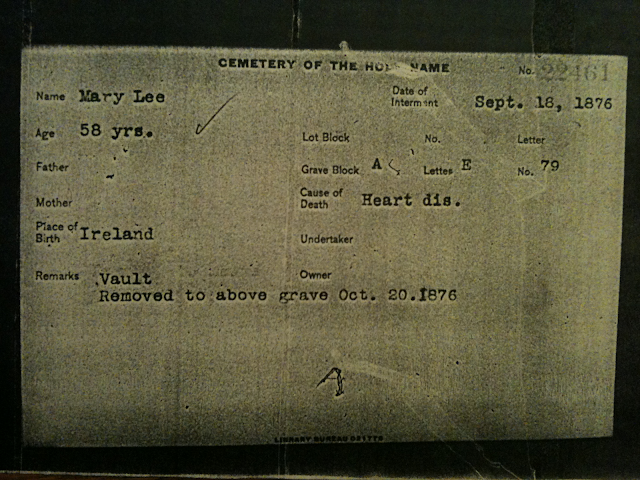