DNA matching with a third cousin

A known third cousin of my father submitted his DNA for analysis at 23andme.  He and my father share a pair of great great grandparents, Calvin Cook and Mary Neil.  This couple was married in Morris County, New Jersey in 1847. 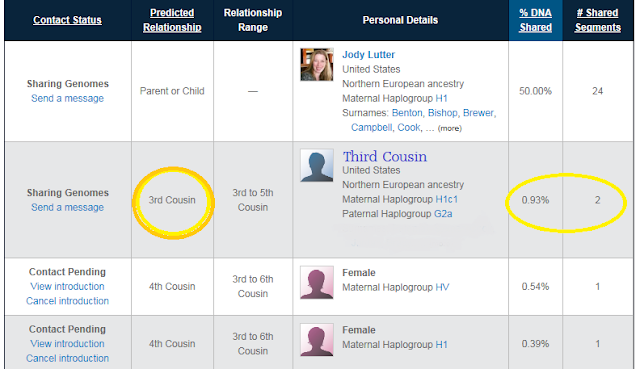 I am this man's third cousin, once removed because I am in the next generation.  (I am a fourth cousin of his children.)  Yet he and I do not share any DNA.  That is how random inheritance is.

So what do we do with this information when we are done congratulating ourselves for accurately tracing a few generations?  We see who else in the DNA database matches this known third cousin along the same segments that he shares with my father. 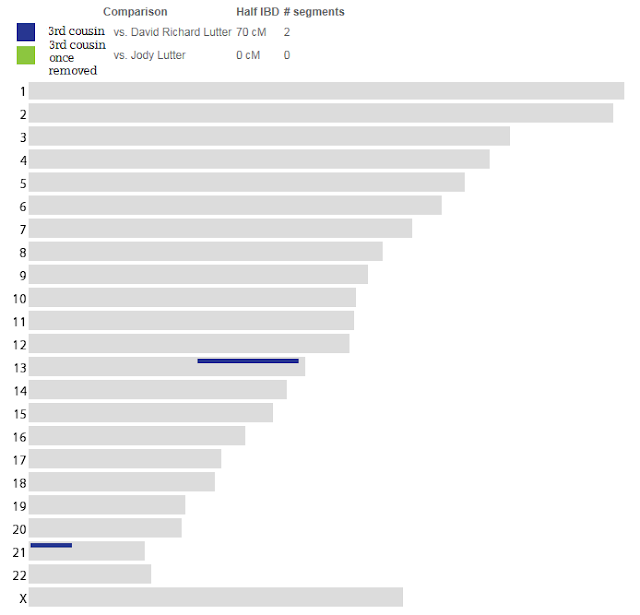 The third cousin and my father match along chromosomes 13 and 21.  At this time, my father has no other matches in the database in this area of chromosome 21.  (I do, but I know that the matches come from my mother and not from my father.)  My father does have two other matches along the same area of chromosome 13.  You have two sides to each chromosome, one from each parent.  When someone matches you in the genetic database, you do not know which parent's side the match is on, unless your parents are also in the database.  My grandparents are not in the database (and will not be because they are dead).  It is not likely that you will be digging up dead ancestors to retrieve DNA specimens.  What you can do instead is have known (living) cousins from different branches submit their specimens.  The third cousin is related through my father's mother.  The two other people who match my father on the same area of chromosome 13 are related through my father's father because they do not match the known third cousin on this area.  We still don't know the relation of these other two people, but we have narrowed down the prospects.
Posted by Jody Lutter at 11:03 AM