If you cannot find a marriage return filed with the State, this article from 1897 could explain why.  It seems that Father O'Connor of Hudson County, New Jersey, was remiss in completing and filing marriage returns for several years.  When prompted, he filed seven years of marriage returns.  If you come across one of these returns, you need to keep in mind that they may not have been made at the time of the event and some were made on behalf of other priests. 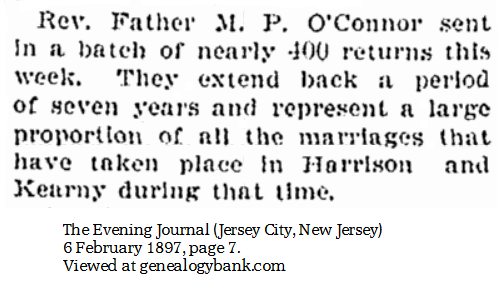 I am still searching in the Trenton Archives for a marriage from 1887 performed in Bayonne, Hudson County by Reverend Egan.  The marriage turns up in the index at familysearch.org.  (Remember to use any index as a guide for where to locate the actual record.)

St. Mary's Church is still active in Bayonne and has a record of this marriage.  They kindly sent me a transcription of their record.

The next important step is to locate the actual marriage return.  Marriages in New Jersey in 1887 are indexed by the name of the groom.  But there is no listing in the index for a marriage between Patrick ODonnell and Delia Joyce.

There are possible explanations for the marriage not appearing in the index:  it was misspelled, it was left out of the index, or the return was never filed with the State.  For now, the above church record is what I use for a source of the marriage date and place, but with a notation that the record cannot be located in the State's records.

You may ask, "Why does this matter?"  For this particular couple, we are dealing with some common surnames.  We would like to pluck this Patrick ODonnell out of the vast sea of ODonnells inhabiting Hudson County in the late 1800s.  This particular Patrick ODonnell was born in Ireland, but we know that he was in the United States by 1887 because he married in New Jersey.  This 1887 marriage record is actually the earliest definitive record that I have found on this man.  The 1880 United States Federal Census does not provide us with a good match for an Irish couple named Peter and Margaret ODonnell with a son named Patrick.  The 1890 census was destroyed.  In 1900, Patrick is living with his wife and children, but not his parents.  We need to link Patrick ODonnell to a set of parents, and the marriage return is a great way of doing this.  The luck of the Irish was with me when someone filled out Patrick's death certificate in 1931.  His parents are listed as Peter ODonnell and Margaret Gallagher, which bolsters the information supplied at familysearch.org.

We want to next establish the identity of the parents of the bride, Delia Joyce.  She died in Bayonne in 1929.  Her death certificate lists her father, but not her mother.

I previously wrote of the death of Delia Joyce's mother in 1870 in Pawling, Dutchess County, New York.  The record of this death is provided by the 1870 mortality schedule, a companion to the census.  In this record, Mary Joyce was killed by a train in 1870; she matches up to family 21 in the census, which is Patrick Joyce, age 40, with a bunch of small children, but no wife.

While we can say with confidence that the father of Delia Joyce was Patrick Joyce, we need additional documentation to establish that her mother was Mary or Margaret and that her last name was Campbell.  We can use the name Campbell to help us perhaps find a marriage record for Delia's parents.  Having a copy of Delia's marriage return, rather than an online index entry, would lend more credence to a claim that Delia Joyce's mother was Ms. Campbell.  There are still other paths to try, such as marriage and death records for Delia's siblings.
Posted by Jody Lutter at 12:41 AM