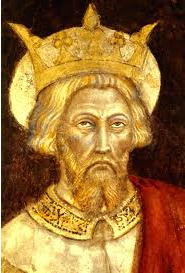 In researching the query posed in a previous blog post, "Royal Genealogy," what are the chances that people of today are descended from Charlemagne?  Quite good, it seems.

So how can you have more ancestors than the population of the planet?  Many of your ancestors from different lines were the same people.  You are your own cousin.

What does this have to do with Charlemagne?  He lived about 1200 years ago.  If you use a conservative four generations per century, that's about 48 generations ago, when you should have billions of ancestors.  There were only about 300 million people on the planet at this time, though, which includes children and people who did not leave any descendants.  Charlemagne was one of those 300 million and he did leave descendants, so it is entirely possible that you are descended from Charlemagne.

Could this be why I have so many "genetic cousins" with no apparent connections when comparing family trees for a few hundred years?  If not Charlemagne, maybe another prolific ancestor?  I will keep this theme in mind for a future blog post.
Posted by Jody Lutter at 1:30 AM