Locating the Graves of Calvin Cook and Mary Neil (Finally)

After several years, I have located the final resting spot of my great great great grandparents, Calvin Cook and Mary Neil.  Here is the story.

Calvin Cook and Mary Neil were both born around 1830 in Morris County, New Jersey.  They were married in the 1840s (different records exist- we'll save that for another post).  I know little about Mary Neil's parentage, but the Cooks were a Morris County fixture for generations before Calvin's arrival.

I combed through area cemeteries and burial grounds, including the burial place of Calvin's parents, Stephen Cook and Elizabeth Vanderhoof, at the aptly named Cook Cemetery, now engulfed by the Rockaway River Country Club. 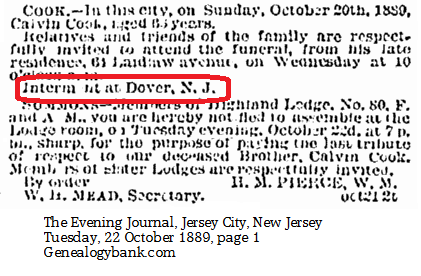 Two official cemeteries exist in Dover, Morris County, New Jersey:  Locust Hill and Orchard Street.  I visited both.  Orchard Street Cemetery has no office on site.  I walked around, but saw no Cook graves.  Records for Locust Hill do not start until the late 1890s, so there was no record of Calvin Cook and no matching record for Mary.

The Dover Historical Society has a compilation of gravestone transcriptions for Orchard Street Cemetery.  No Cooks are listed.

Next I looked for Calvin Cook and Mary at the burial locations of their children.  I was making my way through the children when I stumbled on the Hudson County, New Jersey probate records for Calvin Cook.  Calvin had died in Jersey City, where he was living.  Mary, his widow, submitted papers from Hudson County to Morris County enabling her to dispose of real property held in Morris County.  The actual will and certifications were held in Hudson County.  In Calvin's will, all of the expected children were mentioned, except William Cook.  I thought I had William in the census through 1930.  I erased this 20th century death and looked for a William Cook who died before Calvin in 1889.  This was the key.

Someone posted a gravestone for William H Cook, son of Calvin and Mary, 1849-1871.  This fit the names and time frame.  And the location?  Locust Hill Cemetery in Dover.

So back to Locust Hill Cemetery I went, hoping that someone would recognize this stone:  white with a fallen cross.  I also hoped that Calvin and Mary were buried nearby.  The caretaker did recognize the stone- he had lovingly re-cemented the cross many times over the years. 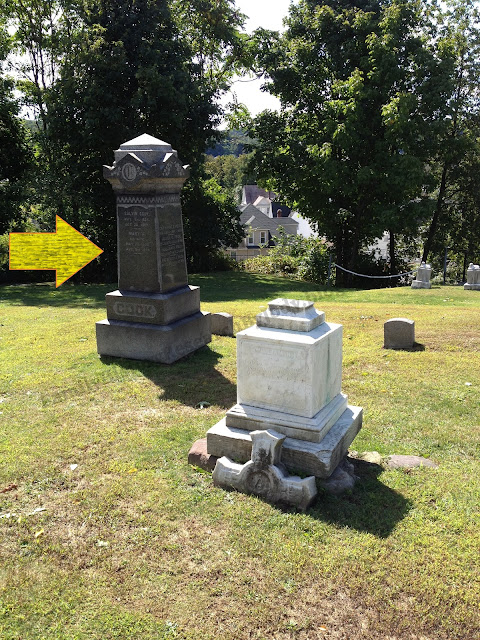 The taller dark stone nearby was for William's parents, Calvin Cook and Mary!  Finally I had found them. 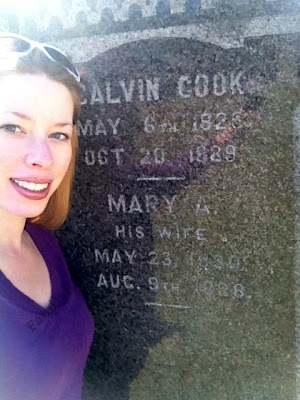 Mary died in 1898.  This is puzzling because I have already searched for a death certificate for her through the early 1900s.  I must return to the Archives at Trenton with this death date in mind.