Gleanings from the Life of a Musician 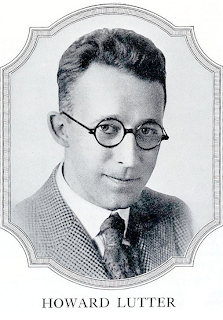 Howard Lutter was one of my great grandfathers.  He was (and still is) known for his musical talent, expressed mainly in his creation of player piano rolls.  His own family had little contact with him, though, and most of my information about him is from my research of public records.

Howard's parents were married January 24, 1888 in Newark.  The marriage was brief.  From the divorce records of Herman Lutter and Clara Uhl, we learn that the couple split in November of 1888, eight months before the birth of Howard.

This father-son relationship was probably strained.  When Herman died in 1924, he left only $5 to Howard.  In comparison, Herman requested a tombstone costing "not less than $600 dollars" and left $2000 to Howard's step-mother, who he was also divorcing.  (I still have not found such a tombstone.)


The 1895 New Jersey state census shows young Howard "Rutter" with his mother, Clara, and her family in Newark.

In the 1900 federal census, Howard Uhl is listed in the household of his maternal grandmother, Clara Uhl [Patschke] at 64 Boston Street in Newark.  Residing with them is Howard's mother, Clara, and his maternal aunt, Lilly.

Howard Lutter first appeared in the Newark City Directory in 1908, working as a clerk at the Prudential Insurance Company.

On September 17, 1910, Howard Lutter married Laura [Ethel] Winterton in Newark.  She was the daughter of William Winterton and Catherine Dunn, formerly of Matawan, Monmouth County, New Jersey.  Howard listed his occupation as "Pianist."


In the 1911 Newark City Directory, Howard is listed as a musician for the first time.  In the 1915 directory, he is removed to New York City.  He turns up in Philadelphia instead for the birth of his first child, Clifford Lutter, born March 18, 1915 at University Hospital in Philadelphia, Pennsylvania.  The family's address was 1534 Arch Street in Philadelphia.  Clifford's wife, Beulah Cook (my paternal grandmother), explained to me that Howard was performing in Philadelphia at the time Clifford was born.


The 1920 federal census provides the only snapshot of the Howard and Laura living together.  They resided at 194 Chadwick Avenue in Newark.  Howard's occupation was "musician."  With them were their two children, Clifford, age 4, and Beryl, age 1.


In the 1930 federal census, Howard H. Lutter was residing at 171 Ampere Parkway in Bloomfield.  His occupation was "sound effect" at Vitaphone.  With him was his wife, Fiorita, children Rita, age 16, Clifford, age 15, and Beryl, age 12.  Laura Winterton is lodging at a private residence nearby.  Fiorita is actually Fiorita Lorenze, wife of James Howard Winnie.  They were the parents of Irene, born 1912, and Fiorita or Rita, born 1914.


In the Newark City Directories in the 1930s, Howard Lutter was listed as a sound engineer in Brooklyn, while Rita was working as a swimming instructor.  In the 1941 directory, Howard's occupation shifted to "sound engineer and janitor's helper."  In the 1940 federal census, Howard Lutter was residing at 59 Peck Avenue in Newark with Rita.  He gave his occupation as janitor, temporary, Board of Education.  He reported working 17 weeks in 1939 and earning $1445.

Howard Lutter registered for the World War II draft in 1942.  He listed his address as 59 Peck Avenue in Newark; wife Rita; employer Newark Board of Education.


Howard's last entry in the Newark City directories was in 1947.  [The collection of Newark City Directories at Fold3.com stops at 1923.  Other years are housed at the Newark Public Library on Washington Street.]

My aunt recalls meeting Howard when she was very young.  This was probably in 1955 when Howard's mother Clara died, which would have caused Howard to fly back to Newark from Los Angeles.

Howard Lutter died March 3, 1959 at the City of Hope Medical Center in Duarta, Los Angeles County, California.  The cause of death was chronic granulocytic leukemia (also called chronic myelogenous leukemia).  He was buried at Glen Haven Memorial Park.  A kind soul photographed the grave for me.  According to the death certificate, Howard worked as a sound technician for twenty years for the Board of Education in New Jersey.

I continue to research Howard Lutter and find out more about the man and his life.