Double enumeration in the census

Sometimes people can't be found at all in the census.  Others have two entries for the same census, called a double enumeration.

Adelia "Delia" Joyce was born about 1863 in Pawling, Dutchess County, New York.  Her mother, Margaret Campbell, died in 1870 after a train hit her.  Adelia is listed with her father, Patrick Joyce, and her step-mother, Bridget Cortney, in the 1880 census in Pawling, occupation "out at service."


I looked into this "out at service."  I figured it meant that Delia was working and living somewhere else, probably as a servant.  If she were living elsewhere, she could also be listed on the census at her place of employment.

Indeed I found her again in the 1880 census, still in Pawling, working as a domestic servant for the widow Margaret Craft, age 70.

This finding sheds some more light on Delia's early life.  She was sent away from her home- was this a blessing or a curse- to live and work with a nearby family.  We don't know at what age she was sent to start working as a domestic, and if she was able to earn any money to keep for herself.  This also provides us with some more people to explore.  Was Margaret Craft related to the Joyce family?  What about the other worker, Francis Cullum?

To get to this point, I first had to figure out that the name was Craft.  In the 1880 index, Margaret is actually listed as "Carzt."

The name "Carzt" looked bizarre for this time and place so I had to find a more normal-looking spelling.  Neighbors tend to not move much when we're dealing with farmland, so I searched for all the women named Margaret or Mary in the 1870 census in Pawling.  And here she is, this time more clearly as "Craft."


Margaret Craft and daughter Mary aged beautifully from 1870 to 1880.  But this is not the only way we know we have the same family.  Look at the neighbors.  You can see that the census taker in 1880 approached in the opposite direction from the route followed in 1870. 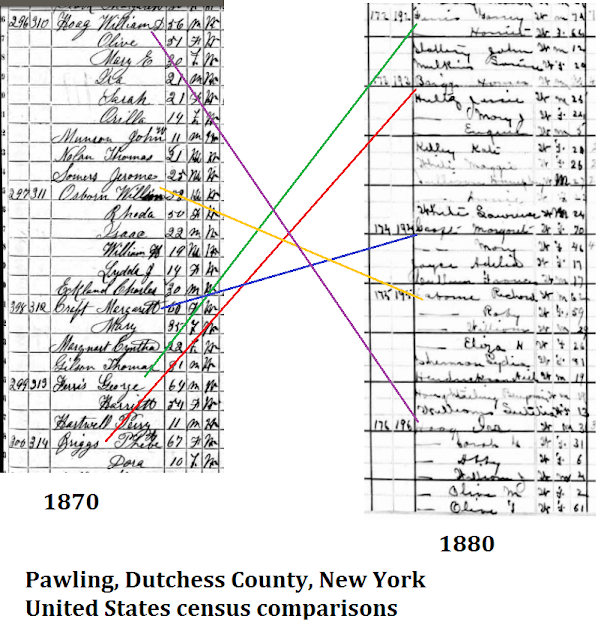 With a more reasonable spelling, we can explore the Craft family more easily.  Margaret Toffey Craft's grave was posted on FindAGrave (by a Fallen Graver) and there is so much more to explore.