Preserved in a photograph 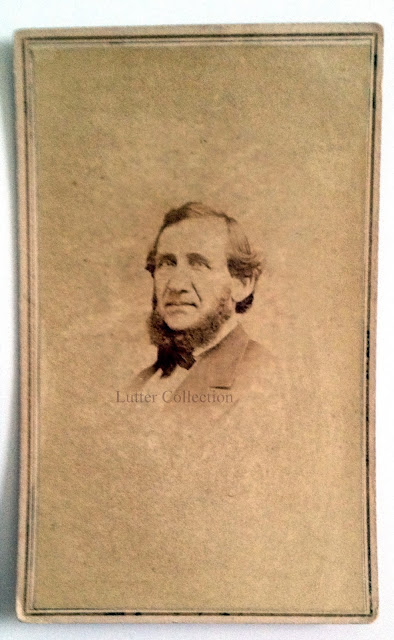 A wonderful photograph has come into my possession through eBay.  To be specific, it is an old type of photograph, a carte de visite ("CDV") from the 1860s.  It is small, four inches by 2/12 inches.  The image is a head shot of a man with a receding hairline, beard, dressed in a suit. 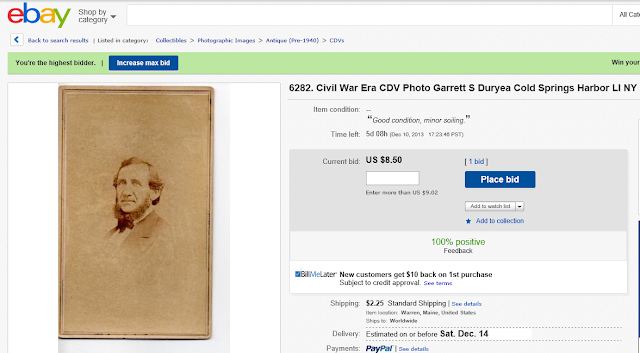 On the back of the photo was written in pencil:  Garrett S. Duryea.  I have a few men with this name in my close family tree, as well as extended branches.  I needed to identify which Garrett could be portrayed in the photo. 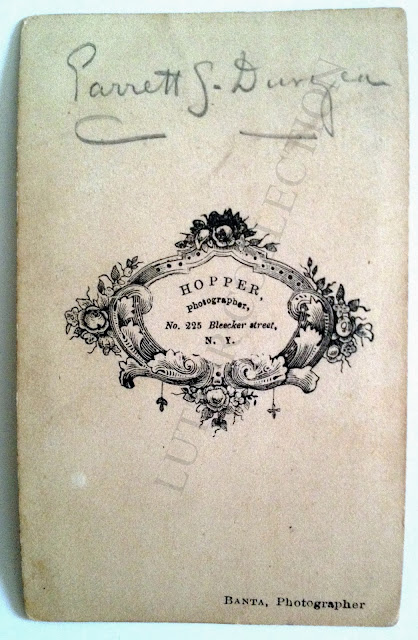 So we are looking for a Garrett Duryea who was above the age of 30 in the 1860s in the New York City area, and there are a few candidates.  But- the eBay listing gave a location of Cold Springs Harbor, Long Island.  I googled "Garrett S. Duryea."  The first few listings were the site Long Island Surnames.  The featured Garrett S. Duryea was married in 1856 in Cold Spring Harbor and could be about the right age to be the subject of this CDV.  But I think that there is a better choice for the subject- a Garrett more closely related to me.

My 3X great grandfather, Stephen C. Duryea, had a brother named Garrett S. Duryea.  Garrett was younger than Stephen and probably born around 1820 in New York City.  I have not found any marriages or children for Garrett.  I found him in the census and city directories living with extended family.  He worked on ships, so it is possible that he may have been away from New York City for extended periods and missing from records during those times.

In the 1860 census, Garrett Duryea was living in New York City in what appears to be some kind of rooming house.  His cousin, Parmenas Jackson, is also a resident, which helps distinguish this Garrett S Duryea from the others. 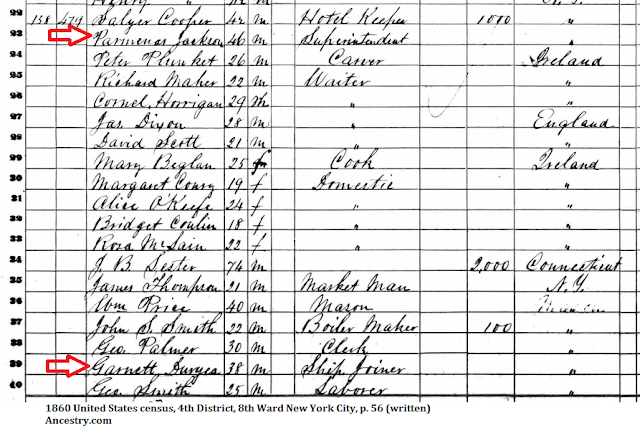 Garrett's next chronological record is the 1866-67 city directory.  He was residing at 540 Greenwich in New York City.  This address housed different family members over the years, so that is how I know that this is the same Garrett S. Duryea. 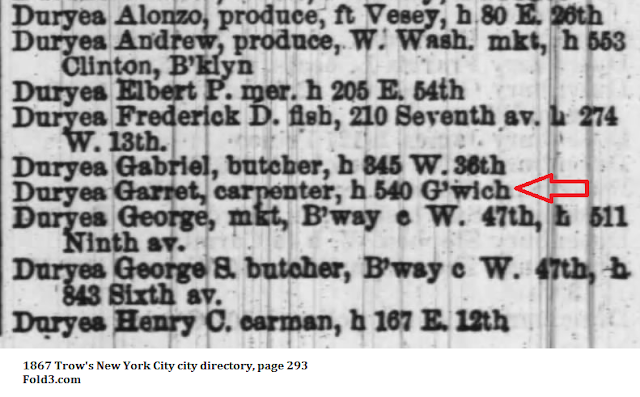 Garrett's residence, 540 Greenwich, is about half a mile from Hopper's studio, 225 Bleecker.  Cold Spring Harbor on Long Island (Suffolk County) is about 35 miles away.


If the photograph is correctly labeled as Garrett S. Duryea, then this is likely my 3X great granduncle.  That is another, important variable:  we do not know who wrote the name on the picture and with what knowledge, so this may not be one of the men named Garrett S Duryea at all.  I have no photographs for any of his siblings or their children, so I have nothing to compare his image to see family similarities.  If I acquire photos of his generation or the next, I may be able to more firmly say that this is likely Garrett.