New Jersey has an interesting collection of Delayed Births 1848-1900 at the Archives.  Because everyone did not record a birth with the local registrar, and this birth may or may not have been recorded at the state level, some people had to request that a birth certificate be created- years after the event.  The accuracy of a record made years later is suspect.  These applications for a delayed birth certificate required information and documentation not required for the original birth certificate.  You can use the information to locate additional records.


This is a birth certificate created years later; in this situation, 46 years later.  The helpful information contains an address at the time of birth as well as full names of the baby and parents.  We get a signature of the father as he attests that the birth occurred at the specified date and place, as well as his current address.

But that's not all.  The applications for the delayed birth certificate are also filmed.

While this information is great, you need to consider the information provided in light of other records.  By the 1940s, when this record was created, this family was spelling their last name with two Ts:  Bossett.  In 1896, the spelling was Bossert or Bosset. 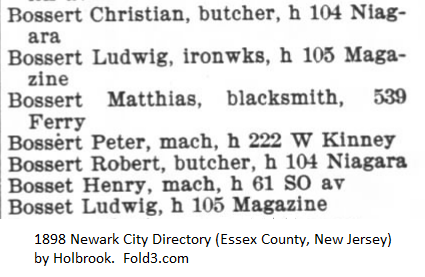 One other sibling, Mary, is listed on the application.  This couple had three children, the first born in 1894.  The omission of this first sibling perhaps indicates that the surviving children did not know about this first child. 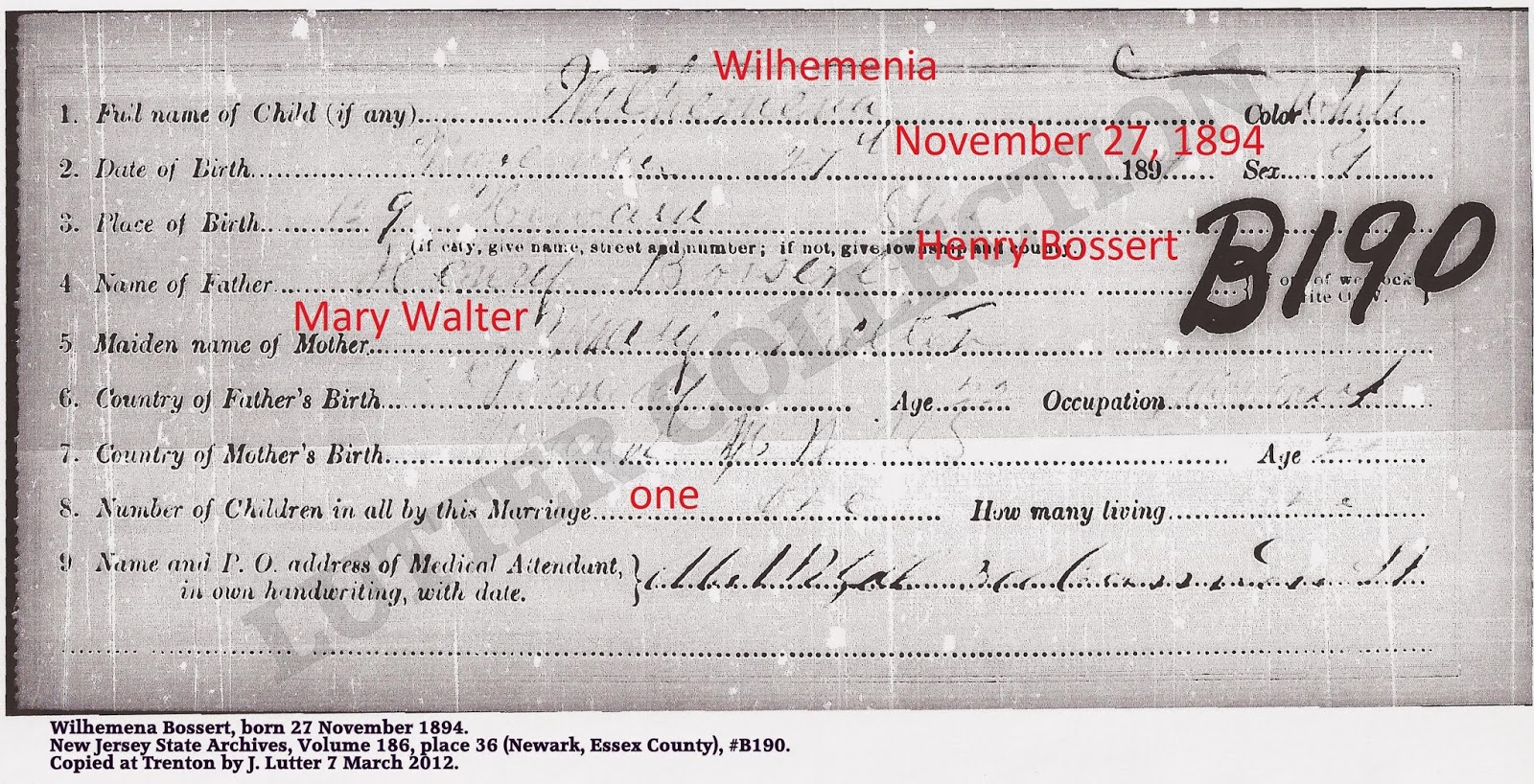 George Cowenhoven Duryee attested to his own birth.  Documentation, which is not on the microfilm, was a baptismal certificate from a church.  You can use this information to possibly locate church records for this family.  (Several members of this branch are buried at the cemetery for this church.)  We get the full names and towns of birth of the parents.

The application for the delayed birth certificate shows us that this family's records lie in both New Jersey and New York.

I would also like to point out some of these place names.  Union Hill existed in 1894, but along with West Hoboken, had become Union City before this record was created in 1943.  These locations are in Hudson County, not Union County.  North Bergen is in Hudson County, not Bergen County.  "Town of Union" in Hudson County is where we can go astray.  By 1899, this town had been broken up and morphed into other other towns, some of which were later annexed into other towns and/or changed names.  Hudson Heights is currently a neighborhood of North Bergen.  So most of these locations are challenging to pinpoint given the border changes, name changes, and non-contemporaneous record making. 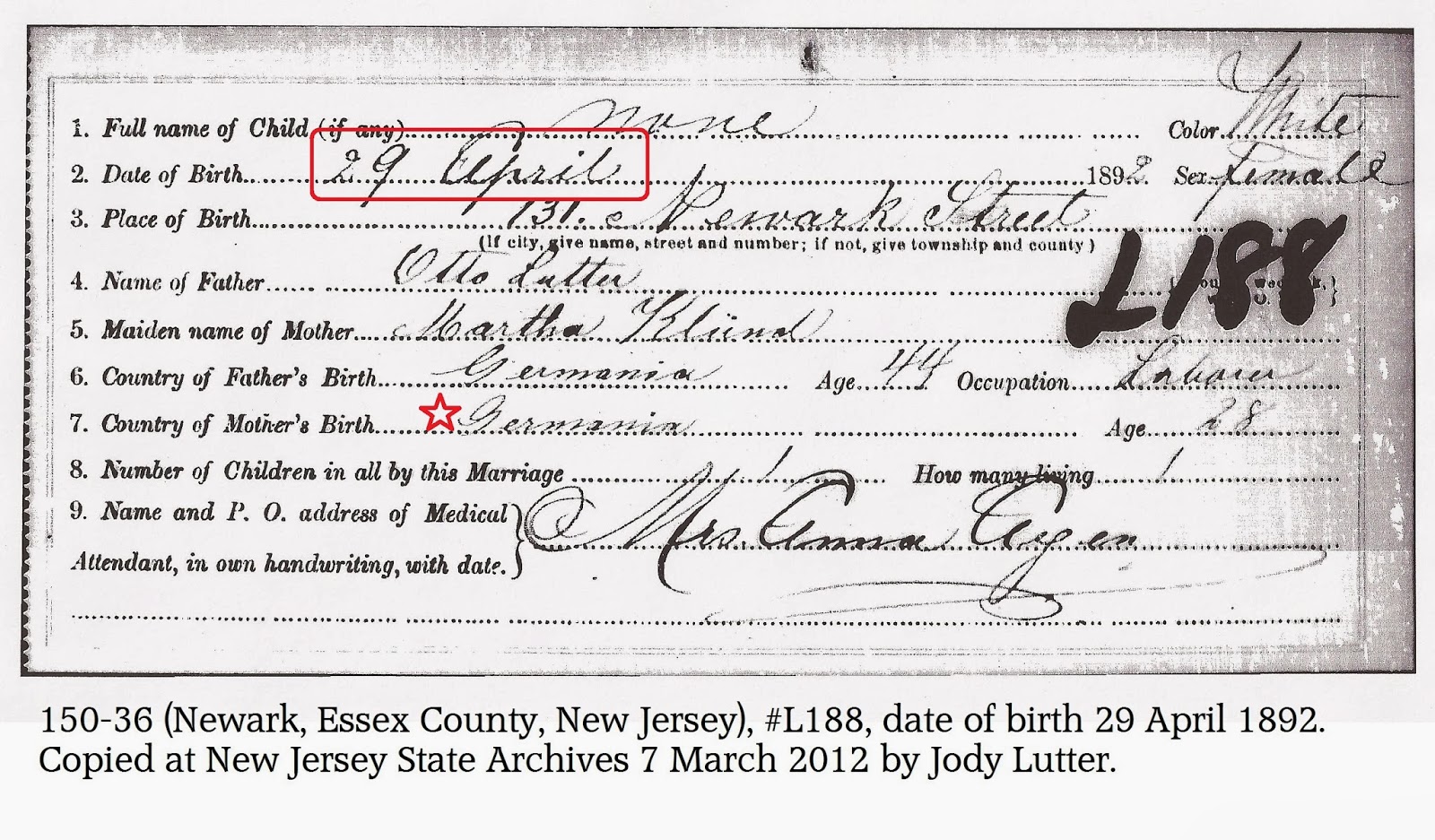 This is the birth certificate of Anna Augusta "Gussie" Lutter made at the time of her birth in Newark on April 29, 1892.

Yet Augusta filed for a delayed birth certificate.


It looks like Augusta thought she was born in Harrison in Hudson County on April 30, 1892.  She had the wrong city and county and was off by one day.  In addition, she was spelling the surname as "Luther," which was a spelling used by the family, but Augusta's original birth certificate appeared in the index as "Lutter."  We would know to look under both spellings, but without a first name at birth, Augusta may have been told that her original birth certificate did not exist.