Amanuensis Monday: 1780 Will of William Winterton of New York City

In the Name of God Amen.  I, William Winterton, of the City of New York, Mason, being of sound mind, memory, and understanding, do make and publish this, my last will and testament, in manner following, that is to say.

First.  I desire that all my just debts and funeral expences be paid so soon after my decease as possibly may be and after payment thereof I leave, devise, and bequeath all the rest, residue, and remainder of my real and personal estate of what kind or nature so ever and wheresoever to my dearly beloved wife, Ann Winterton, to have and to hold to her and her assigns for and during and unto the full end and term of her natural life, provided and upon this special condition that she will not marry any other husband after my decease.  And in case she shall or will marry any other husband, then and in such case, I desire that all my real and personal estate may be sold to the best advantage and divide between my dearly beloved wife, my son, William Winterton, and daughter, Jane Winterton, the wife of John Johnston, share and share alike.  But in case my said wife shall not marry after my decease but shall die in her viduity, then and in such case my will is that all my real and personal estate shall from and immediately after such conti[n]gency happening, go to and be divided between my said son and daughter, share and share alike as aforesaid.  And in case either my said son or daughter should die before my said wife without issue, then and in such case I leave, devise, and bequeath the share and Proportion of such child so dieing as aforesaid to the other survivor, his or her heirs, executors, administrators, or assigns.  And my will is that the said John Johnston, the husband of my said daughter, Jane Winterton, shall not have any power whatsoever over any part of the proportions or share of my estate hereby devised and bequeathed to her, but that the same shall descend to the children of the said Jane by the said John Johnston or any other after taken husband or as it shall or may be disposed of by her last will and testament.  Immediately preced.g her decease.

In Witness whereof I have hereunto set my hand and seal this twenty third day of July in the year of our Lord one thousand and seven hundred and eighty.
–William Winterton—

Signed, sealed, published, and declared by the said William Winterton as and for his last will and testament in the presence of us who have hereunto set our names as witnesses in his presence at his request and in the presence of each other.
--Ter Kerin
--Lewis Morgan
--Joseph Cary

City of New York.  Be it Remembered that on the eighth day of October in the year of our Lord one thousand seven hundred and eighty five, personally came and appeared before me, Thomas Tredwell, Judge of the Court of Probates of the State of New York, Lewis Morgan of the City of Philadelphia, physician, and being duly sworn on his oath, declared that he did see William Winterton sign and seal the preceding written instrument purporting to be the will of the said William Winterton, bearing date the twenty third day of July in the year of our Lord one thousand and seven hundred and eighty and heard him publish and declare the same as and for his last will and testament, that at the time thereof he, the said William Winterton, was of sound disposing mind and memory to the best of the knowledge and belief of him, the Deponent, and that Terence Kerin and Joseph Cary, together with the Deponent, subscribed the said will as witnesses thereto in the Testators Presence.
--Thomas Tredwell

The People of the State of New York, by the grace of God, Free and Independent, to all to whom these Presents shall come or may Concern, Send Greeting.  Know Ye that at the City of New York, on the day of the date hereof, before Thomas Tredwell Esquire, Judge of our Court of Probates, the last will and testament of William Winterton, deceased, (a copy whereof is hereunto annexed) was proved and is now approved and allowed of by us and the said deceased having, whilst he lived and at the time of his death, goods, chattels, and credit within this State, by means whereof the proving and registering the said will and the granting administration of all and singular the said goods, chattels, and credits and also the auditing, allowing, and final discharging the account thereof doth belong unto us, the administration of all and singular the goods, chattels, and credits of the said deceased and any way concerning his will, is granted unto Ann Winterton, the Executrix in the said will named, she being first duly sworn well and faithfully to administer the same and to make and exhibit a true and perfect inventory of all and singular the said goods, chattels, and credits and also to render a just and true account there of when thereunto required.

In Testimony whereof we have caused the seal of our Court of Probates to be hereunto affixed.  Witness Thomas Tredwell, Esquire, Judge of our said Court at the City of New York, the eighth day of October in the year of our Lord one thousand seven hundred and eighty five.
--Dav Judson Clk 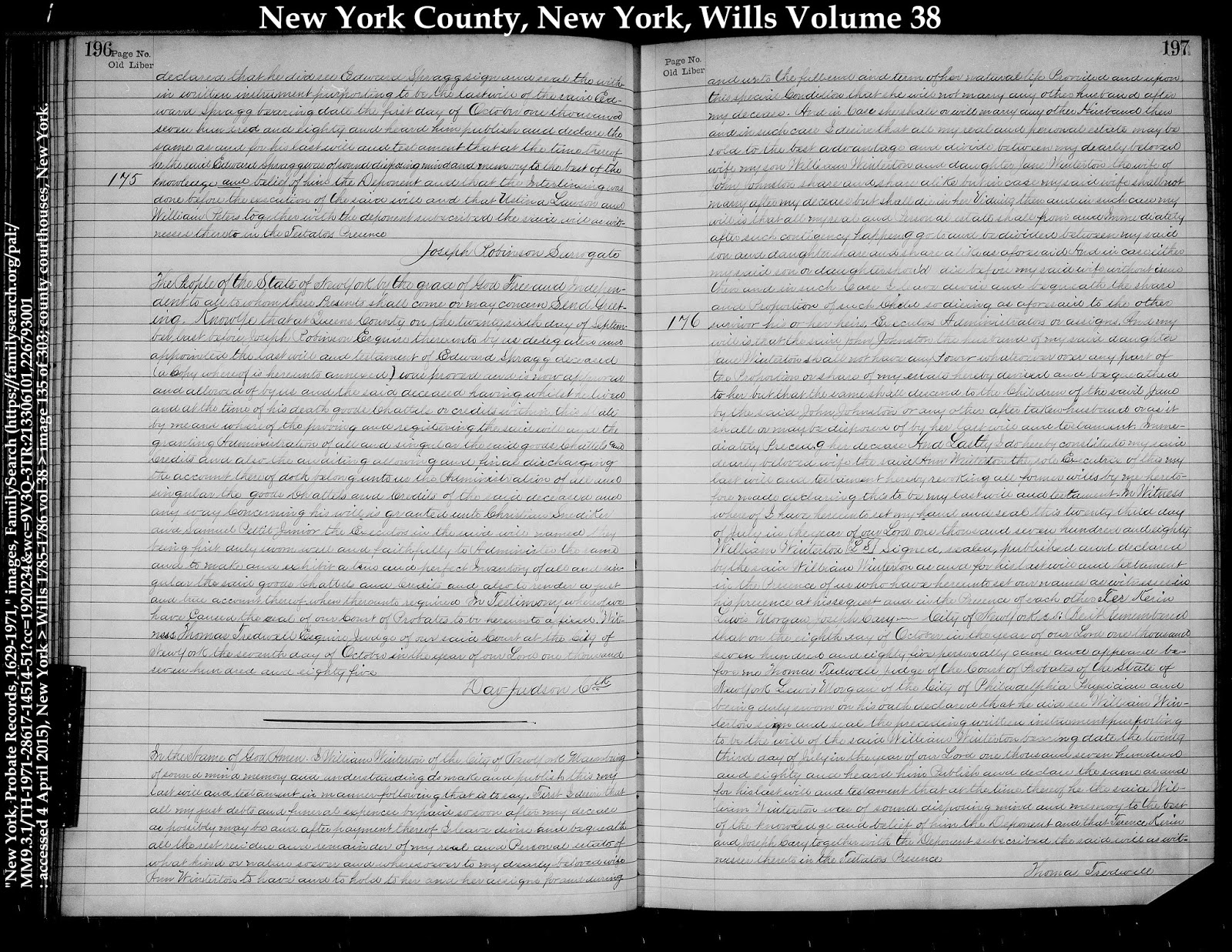 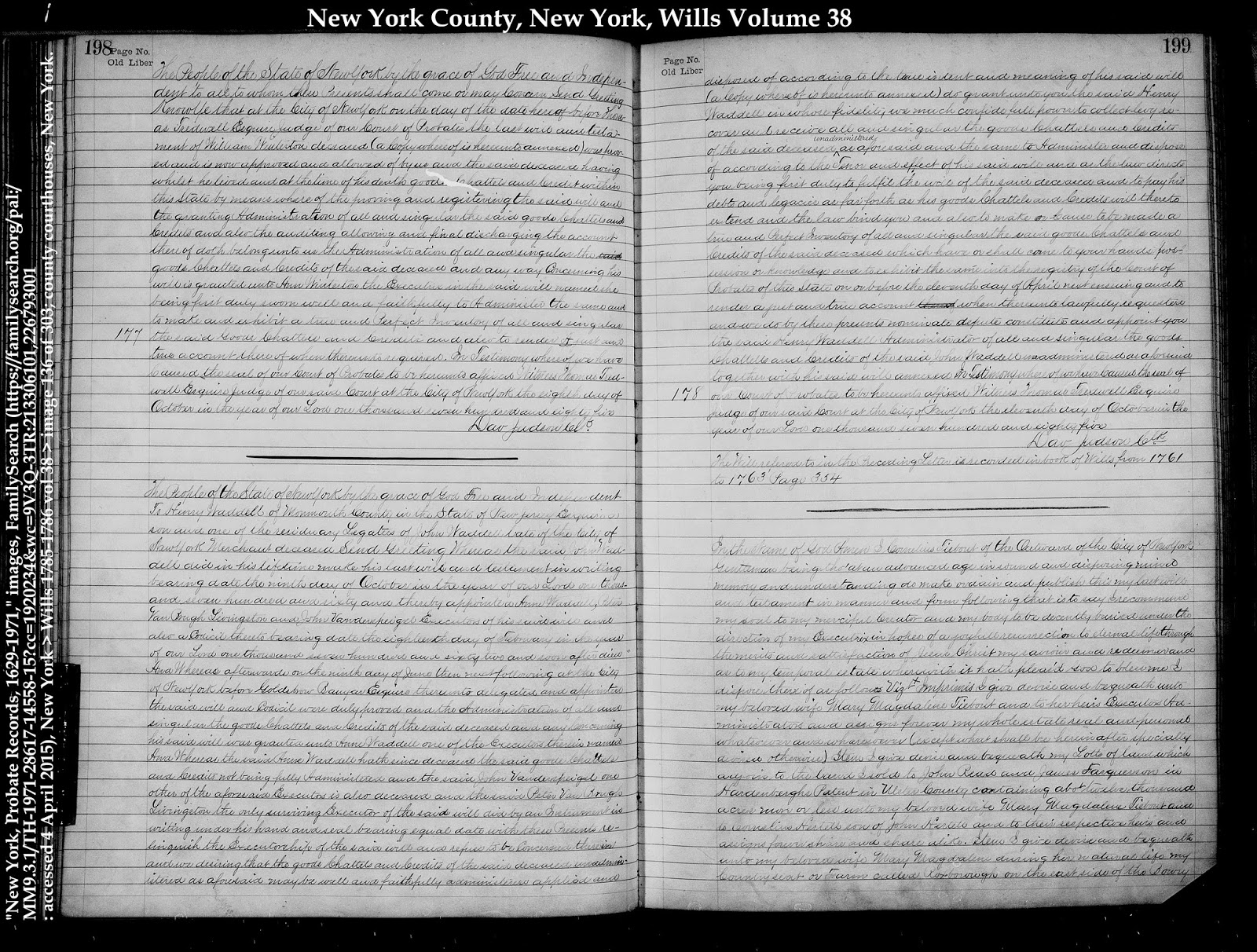