Amanuensis Monday: 1823 Will of William Walling of Middletown, New Jersey

I, William Walling, of the township of Middletown, County of Monmouth and State of New Jersey, being of sound mind and memory, do make and publish this for my last will and testament.

First, I do order that all my just debts and funeral expences be paid by my Executors out of my personal Estate immediately after my decease.

Third.  The repairs that may be necessary for my real Estate I do order my Executors to cut and sell wood off of my real Estate, sufficient to pay for said repairs.

Fourth.  In case my wife accepts the said bequest in lieu of her dower, my will is that after her decease, the residue of my Estate (after payment of debts) both real and personal, be equally divided amongst my children, share and share alike, in fee simple.

Fifth.  In case my children cannot agree themselves about the division of my Estate as aforesaid, it is my will and I do order my Executors or the survivor of them to sell All my Estate, both real and personal, and the money then arising to be equally divided among all my children or their lawfull heirs.

And Lastly I do appoint my three sons, Isaac Walling, Amos Walling, and William Walling, Executors of this, my testament and last will.

In witness whereof I have hereunto set my hand and seal this third day of December in the year of our Lord one thousand eight hundred and twenty three.  –William Walling—
Signed sealed published and declared by the said William Walling to be his testament and last will in the presence of us, Thos Vanderhoef, Stephen Bedle, Thomas Walling.

Stephen Bedle, one of the witnesses to the foregoing will, being duly sworn according to law, did depose and say that he saw William Walling, the testator therein named, sign and seal the same and heard him publish pronounce and declare the said writing to be his last will and testament and that at the doing thereof the said testator was of sound and disposing mind and memory as far as this deponent knows and as he verily believes and that Thomas Vanderhoef and Thomas Walling, the other subscribing evidences, were present at the same time and signed their names as witnesses to the said will together with this deponent in the presence of the said testator.  –Stephen Bedle—
Sworn and subscribed at Freehold the 18th day of May 1824 before me .  –P. C. Vanderhoef, Surrogate

Isaac Walling and Amos Walling, two of the Executors in the within testament named, being duly sworn according to law, did severally depose and say that the within writing contains the true last will and testament of William Walling the testator therein named so far as they know and as they verily believe that they will well and truly perform the same by paying first the debts of the said deceased and then the legacies in the said testament specified so far as the goods chattles and credits of the said deceased will thereunto extend and that they will make and exhibit into the Surrogate Office of the County of Monmouth a true and perfect Inventory of all and singular the goods, chattles, and credits of the said deceased as far as shall come to their knowledge or possession or to the possession of any other person or persons for their use and render a just and true account when thereunto lawfully required.  –Isaac Walling, Amos Walling—
Sworn and subscribed at Freehold the 18th day of May 1824 before me.  –P C Vanderhoef, Surrogate—

I, Peter C Vanderhoef, Surrogate of the County of Monmouth, do certify the annexed to be a true copy of the last will and testament of William Walling, late of the County of Monmouth, deceased, and that Isaac Walling and Amos Walling, the Executors therein named, proved the same before me and are duly authorised to take upon themselves the administration of the Estate of the testator agreeably to the said will.
Witness my hand and seal of office the eighteenth day of May in the year of our Lord one thousand eight hundred and twenty four.  –P C Vanderhoef, Surrogate— 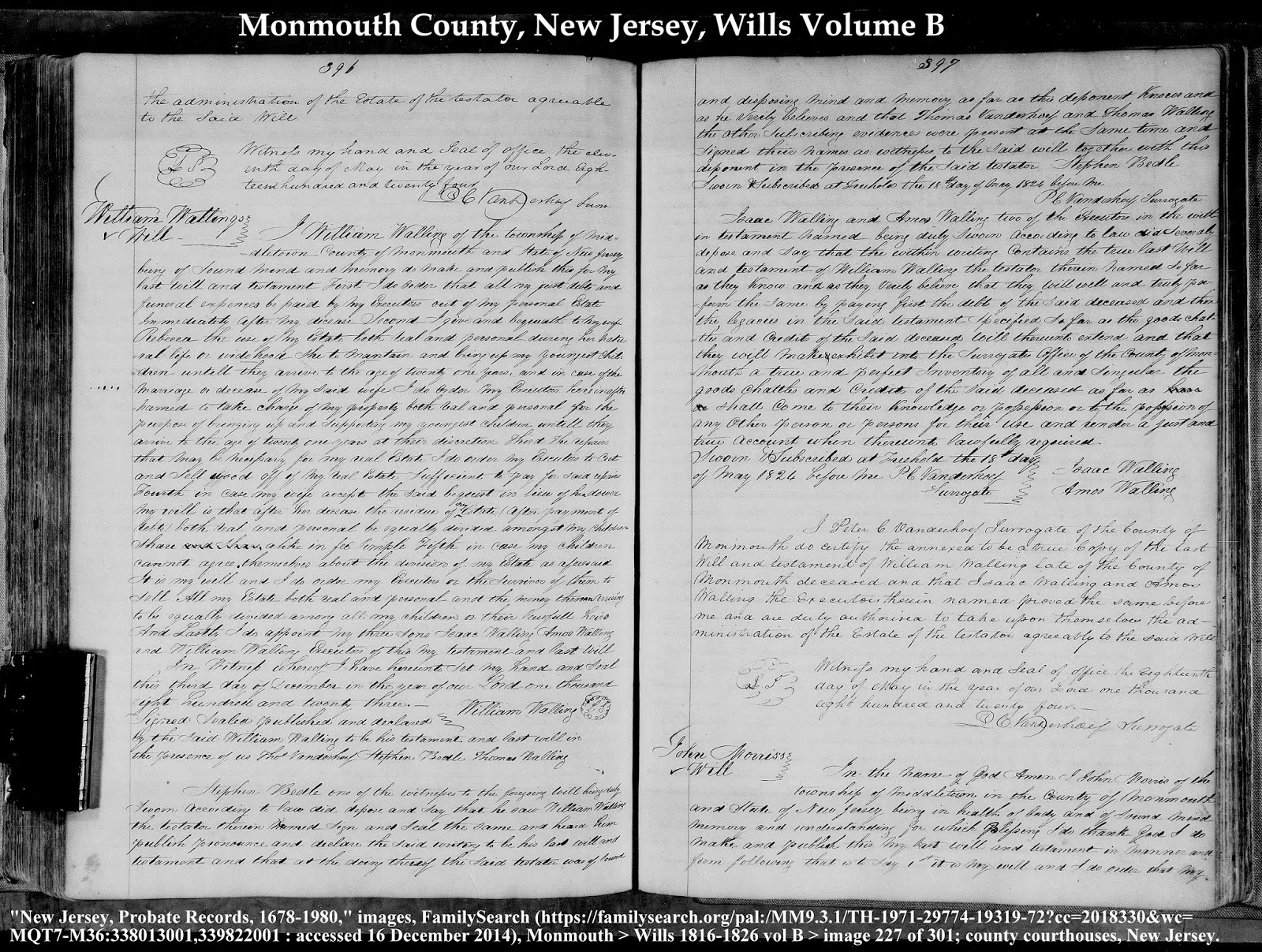 Email ThisBlogThis!Share to TwitterShare to FacebookShare to Pinterest
Labels: transcription, Walling, will