Amanuensis Monday: 1835 Will of George Taylor of Freehold, New Jersey

Renunciation
To all whom it may concern.  Whereas George Taylor Sen. in the County of Monmouth in the State of New Jersey deceased in and by his last Will and testament bearing date the 8th day of January AD 1835 did nominate and appoint me the Subscriber one of the Executors of the same, Now Know ye that for divers good causes and considerations me thereunto moving, I have renounced and do hereby renounce the said Executorship and the Execution of the said Will and testament and do hereby refuse to take on myself the bother of the same.  In testimony whereof I have hereunto set my hand and Seal this 9th day of Feby AD 1835.  Witness present J M Hartsham, John G Taylor

Will
In the name of God Amen.  I George Taylor Senior of the Township of Freehold in the County of Monmouth and State of New Jersey, being advanced in years, but of sound and disposing mind and memory blessed be God therefore & calling to mind the mortality of my body and knowing that it is appointed for all men once to die do make and ordain this my last Will and Testament in manner and form following that it is to say.

Impremis.  I give and recommend my Soul to God who gave it and my body to the earth from whence it came, to be buried in a Christian and decent like manner by my Executors hereinafter named, nothing doubting but at the General Resurrection to receive the same again by the mighty Power of God.  And as touching such worldly Estate wherewith it hath pleased God to bless me, I give bequeath and devise as follows, to wit.

Item.  It is my will and I do order that all my just debts and funeral Expenses be duly paid and Satisfied as soon as can be after my decease.

Item.  I give and devise unto my son Edward Taylor all my lands tenements hereditaments and Real Estate whatsoever and wheresoever to have and to hold to him his heirs and assigns forever, subject however to the charges and incumbrances herein after charged upon the same.

Item.  I give and devise and bequeath unto my daughter Elizabeth Taylor the use and enjoyment of part of the house wherein I now live to wit, the Kitchen next to the Barn and the room next adjoining said Kitchen and the pantry, to have and to hold to her during her natural life.

Item.  I give and bequeath unto my Daughter Rachel Andrews my Dutch Cupboard.

Item.  It is my will and I do order all the remainder and residue of my personal Estate not herein before disposed of, to be sold as soon after my decease as conveniently can be by my Executors herein after named and after paying my debts and funeral expences and other necessary charges.  It is my will that the monies arising therefrom be equally divided among all my children.  Share and share alike to wit, James Taylor, John Taylor, Edward Taylor, Elizabeth Taylor, Hannah Smith, Rachel Andrews, the children of George Taylor, and the children of Eleanor Embly, the children of George & Eleanor to have their parents share.

In witness whereof I have hereunto set my hand and seal this Eighth day of January in the year of our Lord one thousand eight hundred and thirty five.   --- George Taylor Senior

Signed Sealed published pronounced and declared by the said George Taylor Sen to be his last will and testament in the presence of us who have signed our names as witnesses thereto in the presence of each other and of the testator.  --- J M Hartsham.  Hendrick W Sickles.  Hendrick I Sickles.

Henry W Sickles and Hendrick I Sickles, two of the witnesses to the within will, being duly sworn according to Law, did Severally depose and say that they saw George Taylor Senior, the testator therein named, sign and Seal the same and heard him publish, pronounce and declare the annexed writing to be his Last Will and testament, and that at the doing thereof the said testator was of sound and disposing mind and memory as far as these deponents know and as they verily believe and that James M Hartsham, the other subscribing evidence, was present at the same time and signed his name as witness to the said will, together with these deponents in the presence of the said Testator and of each other.
--- Hendrick W Sickles, his mark.  Hendrick I Sickles.
Sworn and Subscribed before me this 19th day of February AD 1835.  Henry D Polhemus, Surrogate.

Edward Taylor, one of the Executors in the within testament named, being duly sworn according to Law, did depose and say that the annexed instrument contains the true last will and testament of George Taylor Senior, the testator therein named, as far as he knows, and as he verily believes, that he will well and truly perform the same, by paying first the debts of the said deceased, and then the Legacies in said will specified, so far as the Goods, Chattels and Credits of the said deceased can thereunto extend and that he will make and Exhibit into the Surrogates Office of the County of Monmouth, a true and perfect Inventory of all and singular the Goods, Chattels, and Credits of said deceased that have or shall come to his Knowledge, or possession or to the possession of any other person or persons for his use and under a just and true account when thereunto lawfully required.
Edward G Taylor.
Sworn and subscribed before me this 19th day of Feby AD 1835.  –Henry D Polhemus Surrogate

I, Henry D Polhemus, Surrogate of the County of Monmouth, do certify the annexed to be a true copy of the last will and testament of George Taylor Senior, late of the County of Monmouth, deceased, and that Edward G Taylor, one of the Executors therein named, proved the same before me and is duly authorized to take upon himself the administration of the Estate of the Testator agreeably to the said will.
Witness my hand and seal of Office at Freehold this nineteenth day of February in the year of our Lord one thousand eight hundred and thirty five. 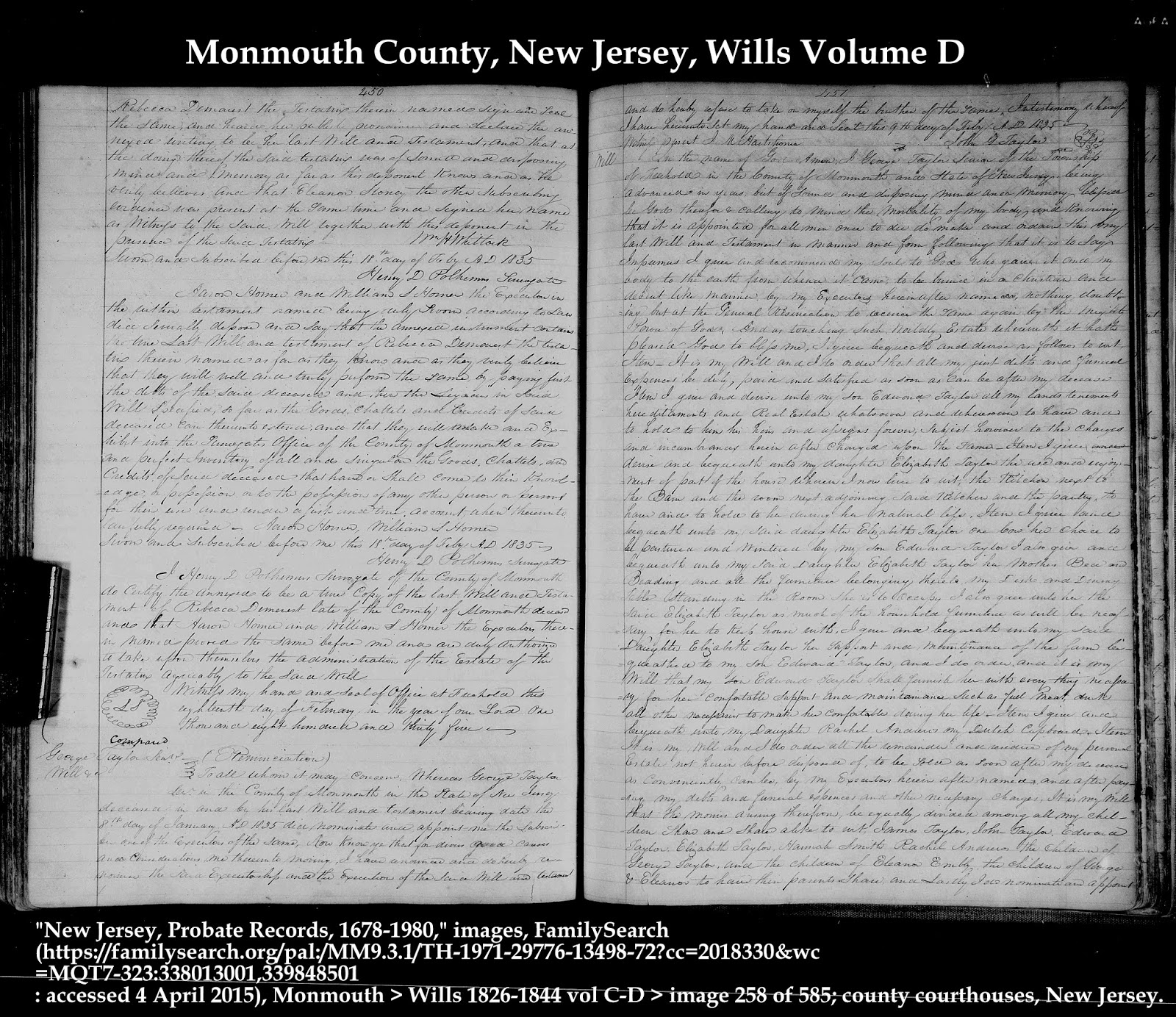 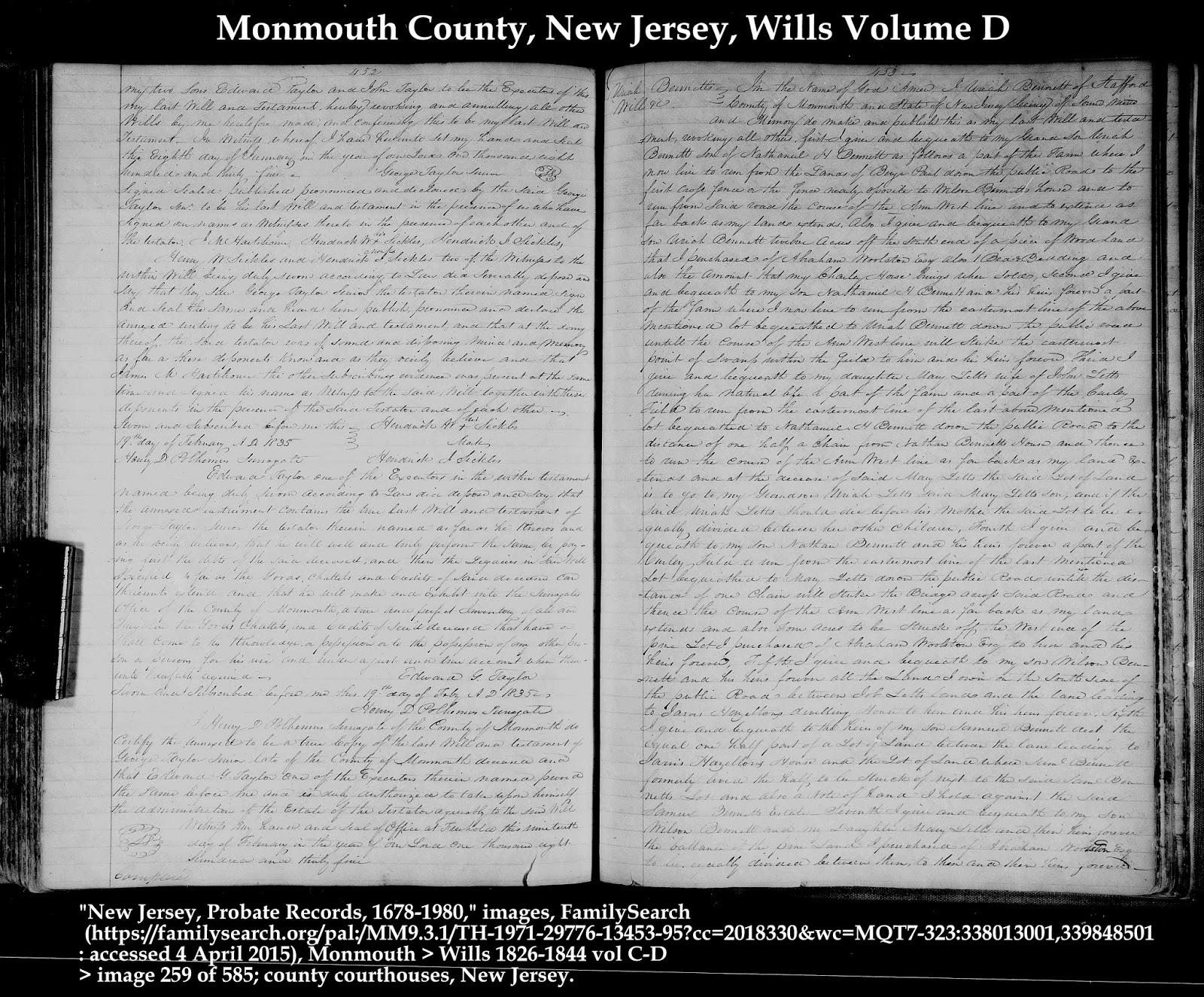 Email ThisBlogThis!Share to TwitterShare to FacebookShare to Pinterest
Labels: Imlay, Taylor, transcription, will