Amanuensis Monday: 1821 Will of Robert Little of Middletown, New Jersey

In the name of God, Amen.  I, Robert Little, of the Township of Middletown, County of Monmouth, State of New Jersey, being weak in body, but of sound mind, memory, and understanding (for which blessing I most devoutly thank my God), do make and publish this, my last will and Testament, in manner and form following, that is to say:

First, It is my will, and I do order that all my just debts and funeral expences be duly paid and satisfied as soon as conveniently can be, after my decease.

Item.  I give and bequeath unto my beloved wife, Mageret Little, one third part of all my real estate and in addition, one Bed and Bedding for the Same, she having her choice of the Beds.

Item.  I give and bequeath unto my Brother, Thomas Little, the use of the Farm with all the appurtenances thereunto belonging until my eldest Daughter, Sarah Jane, shall arrive at the age of twenty one years, that is to say, until some time in the year of our Lord One thousand eight hundred and thirty seven.  The farm on which Joseph Combs now lives, containing about 105 acres.  It is further my will that in case my two daughters should die before the time above mentioned, 1837, that the farm above mentioned shall be, and I do will and bequeath the same, unto Thomas Little, his heirs, executors, and assigns forever.

Item.  I give and bequeath unto my sister, Mageret Little, fifty dollars, to be paid her by my executors within one year after my decease.

Item.  I give and bequeath to Asbury Fountain (in consideration for his kindness to me, and fidelity in my business), a full suit of cloaths of such as he shall choose out of my store viz. coat, vest, pantaloons, hat and pair of boots.

Item.  I give and devise unto my daughters, Sarah Jane Little and Fanny Little, all my Lands, Tenements, Hereditaments and real estate whatsoever, and wheresoever, subject to the right of Dower in the same of their mother, my said wife, to them, their heirs and assigns forever.  Also subject to the charges heretofore created, and bequests made, and put upon the same, to be divided between them, share and share alike.  But in case either of my daughters should die before marriage, the surviving Daughter is to inherit her portion.  And in case both of them should die before marriage, then it is my will that the property bequeathed them shall then go to my brothers and sisters in equal shares, who shall then be living, or in case of their death, then to the Heirs of all my brothers and sisters in equal shares.

Lastly, I hereby appoint my brother, William Little, and my beloved Friend, Henry Arrowsmith, executors of this, my last will and testament, and guardians to my children during their minority.
--Robert Little--

Signed, sealed, published and declared by the said Robert Little, to be his Testament and last will, this twentieth day of October in the year of our Lord one thousand eight hundred and twenty one, in the presence of us, Eli F Cooley, John Frost, Asbury Fountain.

John Frost and Asbury Fountain, two of the witnesses to the within will, being duly sworn on the Holy Evangelist of Almighty God, did severally depose and say that they saw Robert Little, the testator therein named, sign and seal the same, and heard him publish, pronounce, and declare the within writing to be his last will and Testament, and that at the doing thereof the said Testator was of sound and disposing mind and memory as far as these deponents know and as they verily believe, and that Eli F Cooley, the other subscribing evidence, was present at the same time and signed his name as a witness to the said will, together with these Deponents in the presence of the said Testator.
--John Frost
--Asbury Fountain
Sworn at Freehold the 8th day of November 1821, before me, Caleb Lloyd, Surrogate

William Little and Henry Arrowsmith, the Executors in the within Testament specified, being duly sworn on the Holy Evangelists of Almighty God, did severally depose and say that the within Instrument contains the true last will and Testament of Robert Little, the Testator therein named, so far as they know and as they verily believe, that they will well and truly perform the same by paying first the debts of the said deceased and then the Legacies in the said Testament specified, so far as the goods, chattels, and credits of the said deceased can thereunto extend; and that they will make and exhibit into the Surrogate's office of the County of Monmouth, a true and perfect Inventory of all and singular the Goods, chattels, and credits of the said deceased that have or shall come to their knowledge or possession, or to the possession of any other person or persons for their use and render a just and true account when thereunto lawfully required.
--Wm Little
--Henry Arrowsmith
Sworn at Freehold the 8th day of November 1821, before me, Caleb Lloyd, Surrogate

I, Caleb Lloyd, Surrogate of the County of Monmouth, do certify the annexed to be a true copy of the last will and testament of Robert Little, late of the County of Monmouth, deceased, and that William Little and Henry Arrowsmith, the Executors therein named, proved the same before me and are duly authorized to take upon themselves the administration of the Estate of the Testator, agreeably to the said will.
Witness my hand and seal of Office the eighth day of November in the year of our Lord one thousand eight hundred and twenty one.
--Caleb Lloyd, Surrogate 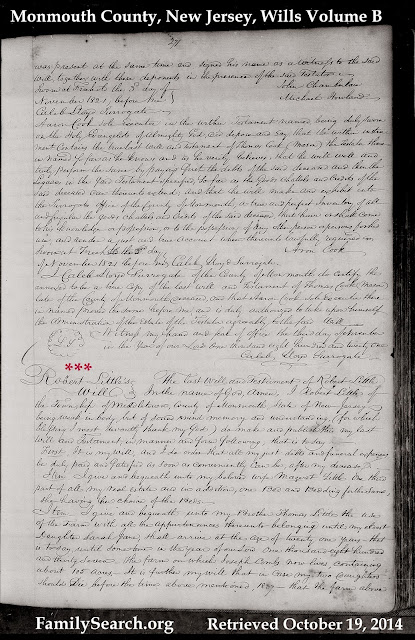 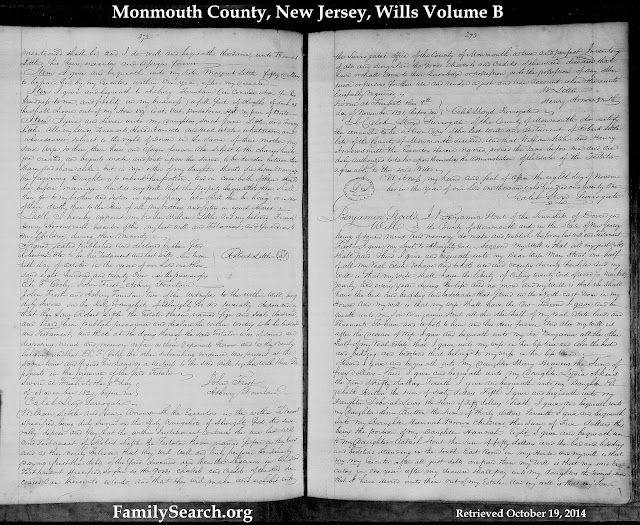