While working on a branch of my Hyser family, I noticed that online family trees had a different year and place of death for Adelaide Hyser, wife of Sherwood Preston.  Adelaide was a sister of my father's 3rd great grandfather, Louman Hyser (1826-1895).

In the 1855 New York State census, Adelaide and husband lived in Catskill, Greene County, with two children.  In the 1860 federal census, Adelaide was living with her father and three children, minus the husband, in Catskill.  Adelaide relocated to Jersey City after the 1870 census.

My source for Adelaide's death was from a compiled genealogy of the Rockefeller family.  In this work, Adelaide died in Jersey City, [Hudson County], New Jersey on February 6, 1907.

Online trees had the year of death as 1908.  Places included Jersey City, Union Hill in Morris County, and Union Hill in Hudson County. 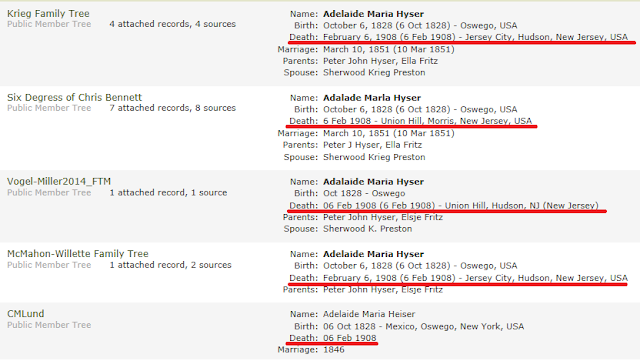 The source for this date and these places of death was from an application by Irving Sherwood Preston (a great grandson of Adelaide) to join the Sons of the American Revolution under the patriot Simon Rockefeller.  In viewing the actual application [database at Ancestry.com], you can see that the date given for Adelaide's death was February 6, 1908, but no place of death was given. 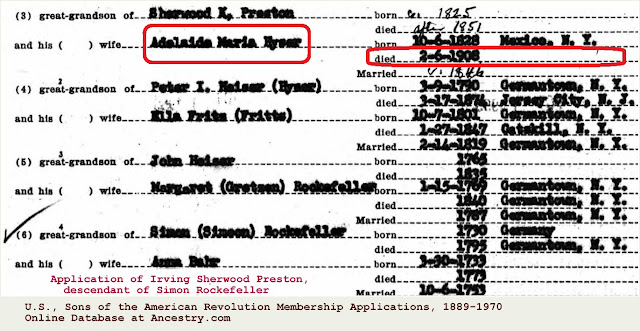 The compiled genealogy and the SAR application are both derivative sources with questionable reliability.  I needed the actual death certificate.  Fortunately, I copied many years of Preston deaths because I am a Preston descendant on my mother's side of the family.  The last Preston in my line was Anna Preston (1890-1921).  I have not found a relation between my great grandmother Anna Preston and Adelaide Hyser's husband Sherwood Preston.

According to the death certificate, Adelaide M Preston, daughter of Peter Hyzer and Ella [Fritz], died in Jersey City on February 6, 1908. 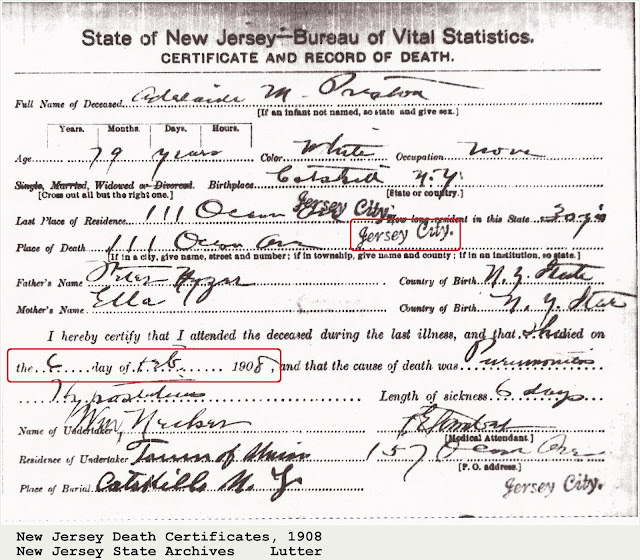 Her obituary appeared in the newspaper Jersey Journal, viewable at GenealogyBank.com (pay site).  A textual search for "Preston" did not yield this result.  I searched by date. 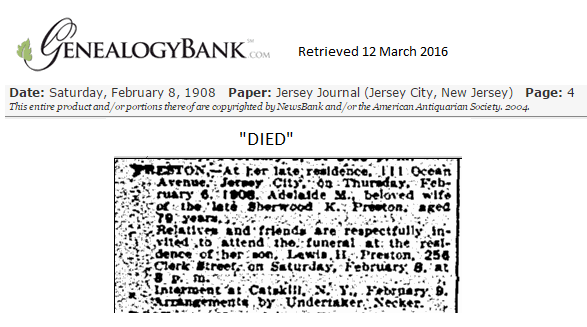 Burial was in Catskill.  Adelaide's father, brother, and other family members were buried at Catskill Village Cemetery.  I don't see a grave listing for Adelaide online.