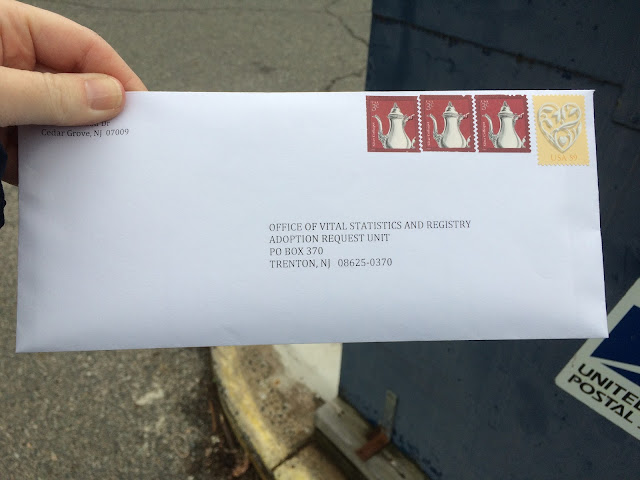 This is not another ordinary request for a vital record in New Jersey.

This envelope contains a request for a copy of a birth certificate that was sealed because the child was adopted.

THIS IS BIG NEWS for New Jersey.  If your birth certificate was sealed because you were adopted, you can now request your original birth certificate, containing the names of your biological parent(s).  The certificates will be mailed beginning January 1, 2017.


The Department of Health has a link to the form (REG-41) with instructions.  (The links for the State change often, so if the link does not work, turn to Google.)

The certificate that I requested is for a birth from 1936.  The court records about the adoption were not sealed, so the name of the birth mother was known.  (New Jersey sealed adoption records in 1940.)  Several women carried this name, so the exact birth mother was not identified with certainty and most candidates were dead.  A few years ago, DNA testing linked several close cousins of one possible mother, prompting an elderly family member to identify the birth mother and explain some of the story.

The biological father was not named in the court records.  His name may or may not appear on the original birth certificate; however, he has been identified through DNA tests submitted by some of his descendants and close cousins.  His identity may have never been uncovered if not for DNA testing.

Both biological parents are long deceased.