In the name of God Amen.

I, Conrad Hopler, of the Township of Pequanack, in the County of Morris, and State of New Jersey, being sound of mind and memory this tenth day of May in the year of our Lord Eighteen hundred and fifteen, do make the following as my last will and testament.

First I give and bequeath unto my daughters, Charlotte, wife of Henry Mourison, Elizabeth, wife of William vanWinkle, Catharine, wife ofIsaac Tuttle, Ann, wife of Jacob Vanderhoof, Sarah, wife of David Occabock, Margaret, wife of James Shaw, and Susannah, wife of James Lyon, and to their heirs and assigns forever all that part of two certain tracts of land which I am lawfully seized of at present, the one originally contained sixty three acres and four tenths and the other eighty six acres and six tenths which said two tracts of land was surveyed and returned to Joseph Hopler, my father, on the twenty eighth day of March AD Seventeen hundred and fifty by virtue of a deed to him from Gershom Mott by a deed bearing date the twelfth day of March Seventeen hundred and forty nine fifty- this is now about sixty seven acres of the two said tracts that I am now possessed of which I wish to be equally divided between my said six daughters above named or their lawful representatives according to quantity and quality- to them their heirs or assigns forever. The said lands being situate near where John Tucker now living in the township of Pequanack abovesaid.

Second I give and bequeath unto my son, Peter Hopler, and to his heirs and assigns forever, the house and barn where I now live and the lot of land where they stand bounded as follows- Beginning in the road distant one chain and ninety links due west from the west corner of my dwelling house, thence /1/ north forty two degrees and fifteen minutes east four chains and fifty links to an apple tree; thence /2/ south seventy one degrees and thirty minutes east one chain and thirty four links; thence /3/ south three degrees west three chains and twenty links; thence /4/ south fifty degrees and thirty minutes west two chains, to the middle of the aforesaid road; thence /5/ westerly along the said road to the place of beginning, containing one acre be the same more or less.

Thirdly I give and bequeath unto my said son Peter Hopler and to his heirs and assigns forever all that other lot of land also in the township of Pequanack lying about a quarter of a mile from the road that leads from Boonton to Frederick Miller on the north east side of said road about north east from where Frederick Hopler now lives- beginning at a small black oak saplin, the north east corner of Jacob Kanous’ lands, being also a corner in the Boonton tract; thence /1/ north sixty two degrees with twenty chains partly by a stone fence to a corner in a road lately laid out from Jacob Demouth’s barn to the publick road near Frederick Hopler’s; thence /2/ along said road or near the same north forty one degrees east twelve chains and fifty links to another line of the Boonton tract; thence /3/ along the same southerly about five chains to another line thereof; thence /4/ along the same to the place of beginning, containing twenty acres be the same more or less.

Fourth I give and bequeath unto my son, Frederick Hopler, during his natural life and to his heirs after his decease the following lots of land and premises situate in the township of Pequanack aforesaid.

First lot bounded as follows. Beginning at the south east end of the bridge that crosses the Beaver brook in the road leading from where I now live and to Frederick Miller’s; thence /1/ southeasterly along in the middle of the road fourteen chains and forty three links thence /2/ south forty one degrees and thirty minutes west nine chains and eighty seven links; thence /3/ north fifty two degrees and thirty minutes west to the said Beaver brook; thence /4/ up the stream of said brook the final courses thereof to the place of beginning containing fifteen acres be the same more or less.

The second lott, called the barn lot, beginning at the north east side of a large rock in the road about three or four chains southeasterly from my dwelling house; thence /1/ south twenty four degrees west two chains; thence /2/ south fifty nine degrees and thirty minutes east eight chains and fifty links; thence /3/ north twenty four degrees east two chains to the middle of the aforesaid road; thence /4/ along in the said road north fifty nine degrees and thirty minutes west eight chains and fifty links to the place of beginning, containing one acre and seventy hundredths of an acre.

Fifthly all the residue of my land, not heretofore bequeathed, situate on the northeast side of the road leading from William Scott’s to the bridge crossing the beaver brook near the school house, I give and bequeath unto my son, Frederick Hopler, during his natural life and to his heirs after his decease forever.

Sixthly all the residue of my land not heretofore bequeathed, lying on the southwest side of the road leading from William Scott’s to the bridge crossing the beaver brook near the school house in Rockaway valley I give and bequeath unto my son, Peter Hopler, and to his heirs and assigns forever.

I appoint Jacob Demouth and my son-in-law, Henry Mowrison, to be executors to this, my testament and last will.

In witness whereof I have hereunto set my hand and seal the day and year above written.
Conrad Hopler, his mark

Signed, sealed, published, and declared by the said Conrad Hopler to be his testament and last will in the presence of us: 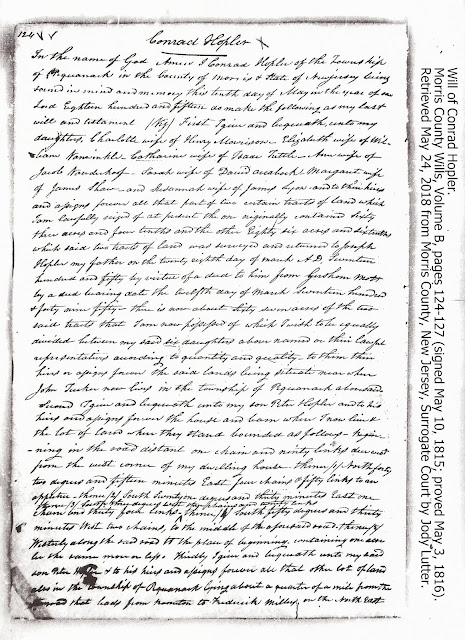 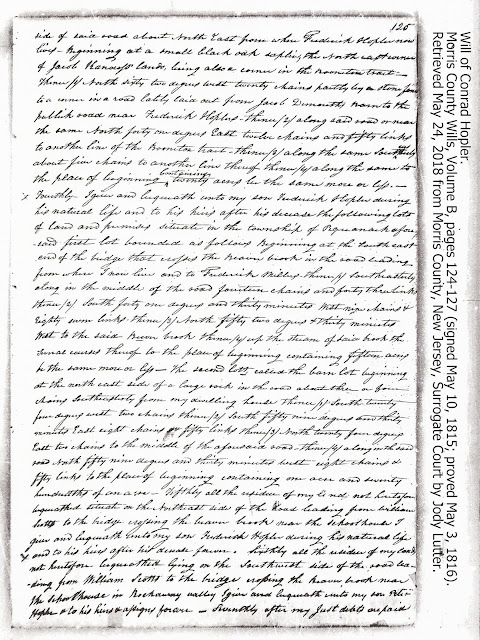 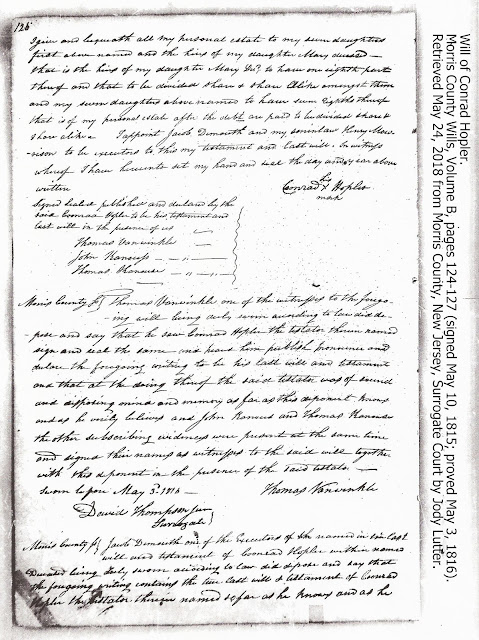 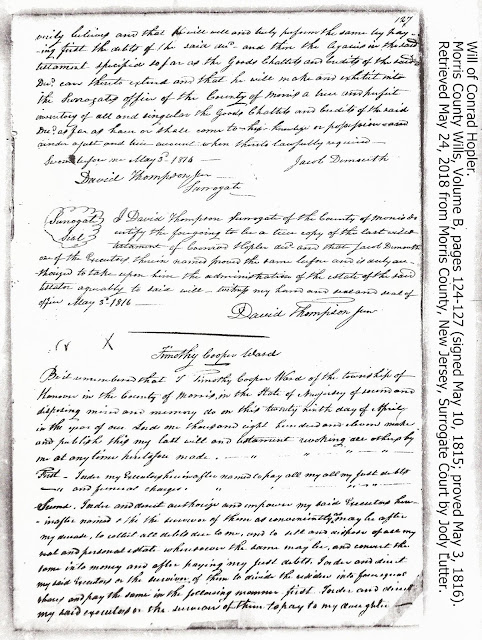 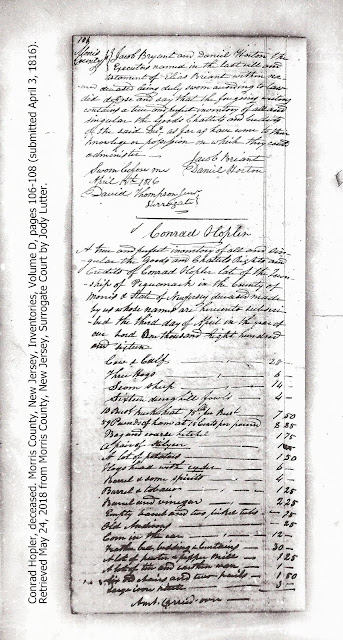 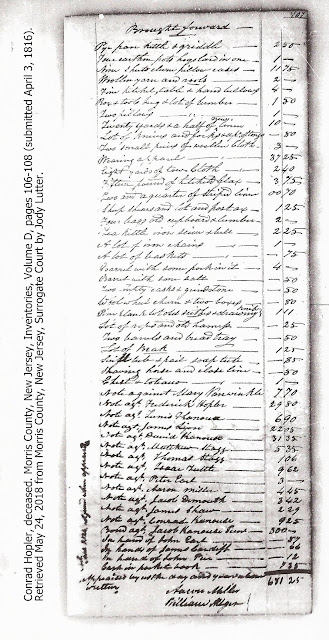 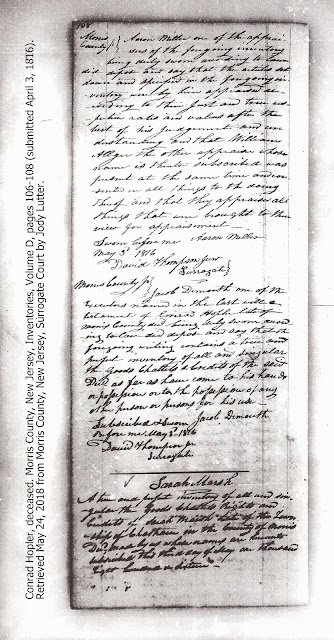 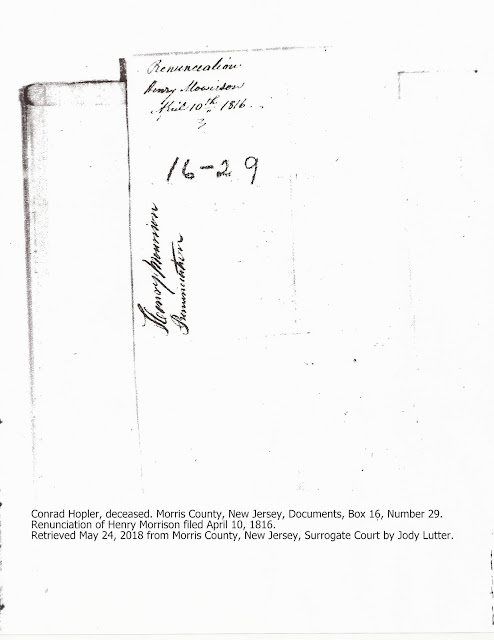 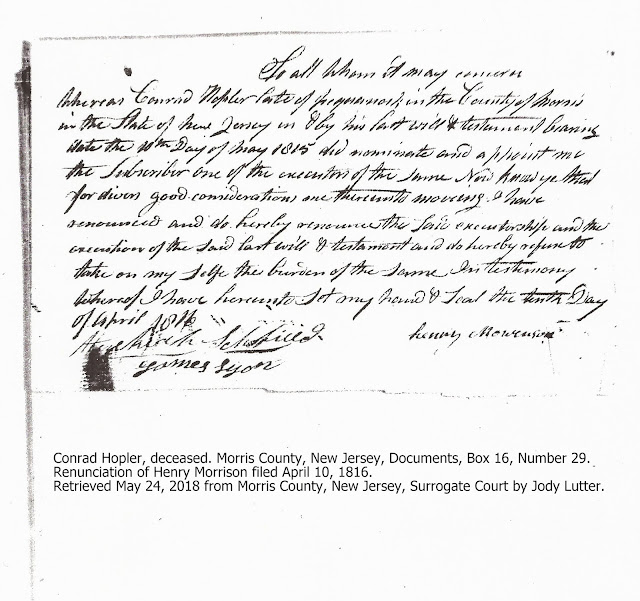