In the name of God Amen.

I, Samuel Peer, of the Township of Pequanack, in the County of Morris and State of New Jersey, being of sound mind and memory this fourteenth day of September in the year of our Lord Eighteen hundred and eighteen. Thanks be to God for all his mercies, calling to mind the mortality of my body; and as touching the things wherewith it hath pleased God to bless me in this life, I give and bequeath in manner following (to wit):

1st, after my debts and funeral charges be paid, which is to be done by making sale of so much of my personal estate as shall be necessary by my executors herein after named, I give and bequeath the residue of my personal estate together with all my real estate to the use of my daughter, Susannah Peer, for and during her natural life, provided she continue to live unmarried, but if she should marry, this bequest to be null and void.

2d, after the decease or marriage of my daughter, Susan Peer, it is my will that my real estate descend to my two grandsons, Samuel Peer and Jacob Peer, and to be divided between them, that Jacob Peer shall have the house and barn where I now live with twenty acres of land to begin at the river below my house and to run westerly parallel with the road in front of my house untill it strike the back line of my farm and the residence of my homestead farm. I wish to be so divided that each of the two have an equal quantity, that is each an equal quantity of acres in the whole homestead farm. Also that each have alike quantities of wood and meadow land. And if my said grandsons cannot agree on a division of the said lands abovesaid then I appoint that Thomas Vanwinkle herein after named as one of my executors shall divide the same between them agreeably to the directions herein laid down, which division shall be conclusive between the said Samuel and Jacob. It is my intention that the bequest of my real estate herein made to my grandsons, Samuel Peer and Jacob Peer, be to them, their heirs and assigns forever. Also the lot of woodland which I brought of William Miller containing about twenty acres I also give to my two said grandsons and to their heirs and assigns forever and to be equally divided between them.

3d,  it is my will that my daughter, Susannah Peer, shall have no liberty to sell any of my personal estate of which I have given her the use of, nor to cut any timber, only for her own firewood and for fencing and repairing the farm and buildings.

5th, after the decease or marriage of my daughter, Susannah, all the personal estate which she hath had the use of and is in being then it is my will shall be equally divided amongst my children or their lawful representatives so that the representatives of each have the share divided equally amongst them that their parent would have.

6th, I appoint Samuel Peer, my grandson, and Thomas Vanwinkle to be executors to this, my last will and teswtament.

In witness whereof I have hereunto set my hand and seal dated as above.
Samuel Peer, his mark

Signed, sealed, published, and declared by the said Samuel Peer to be his testament and last will in the presence of us:
Samuel Peer Jun
Thomas Vanwinkle
Isaac Drake

Thomas Vanwinkle, one of the witnesses to the foregoing will, being duly sworn according to law, did depose and say that he saw Samuel Peer, the testator therein making his signature to said will and heard him publish and declare the foregoing writing to be his last will and testament, and that at the doing thereof the said testator was of sound and disposing mind and memory as far as this deponent knows and as he verily believes and that Samuel Peer Jun and Isaac Drake the other subscribing evidences were present at the same time and signed their names as witnesses to the said will together with this deponent in the presence of the said testator.
Thomas Vanwinkle
Sworn before me March 16th, 1819
David Thompson Jun, Surrogate

Samuel Peer, one of the executors named in the foregoing will, being duly sworn according to law, did depose and say that the foregoing writing contains the true last will and testament of Samuel Peer, the testator therein named, so far as he knows and as he verily believes and that he will and truly perform the same by paying first the debts of the said decd and then the legacies in the testament specified so far as the goods and chattels and credits of the said decd can thereto extend and that he will make and exhibit into the Surrogate’s office of the County of Morris a true and perfect inventory of all and singular the goods, chattels, and credits of the said decd, and render a just and true account when thereto lawfully required.
Samuel Peer
Sworn before me March 16th, 1819
David Thompson Jun, Surrogate

Note: Samuel Peer was my 7th great grandfather.
I descend from his daughter, Jane, who was deceased when Samuel wrote his will in 1818.
Jane married John Cook (1745-1821). 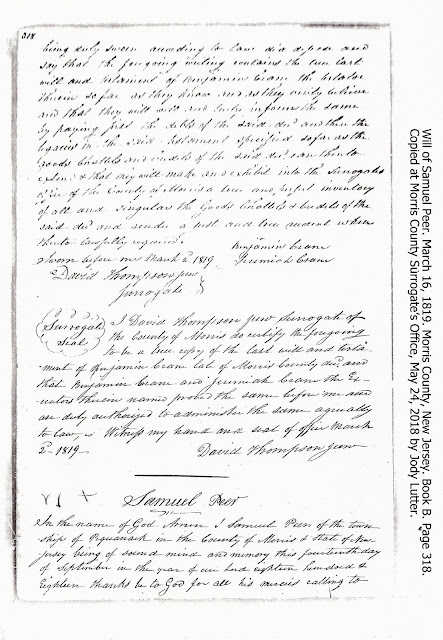 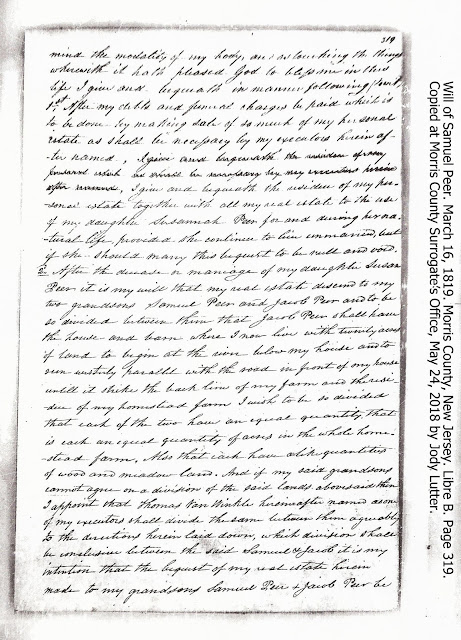 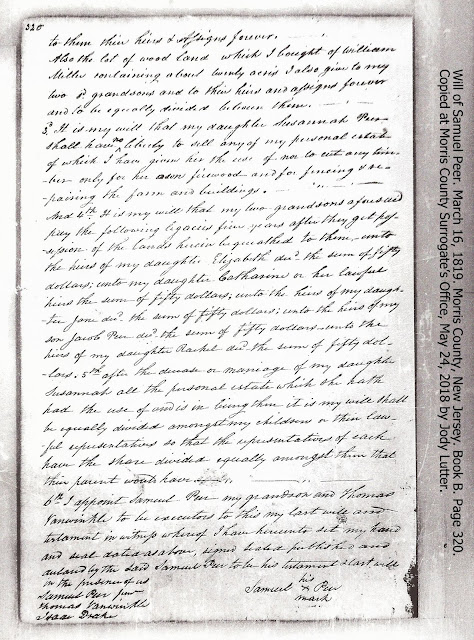 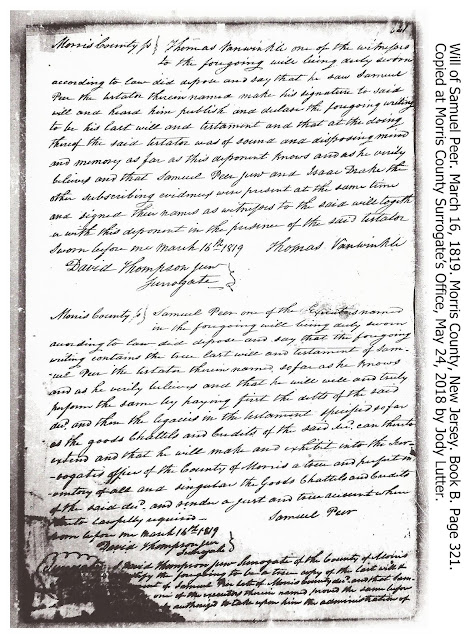 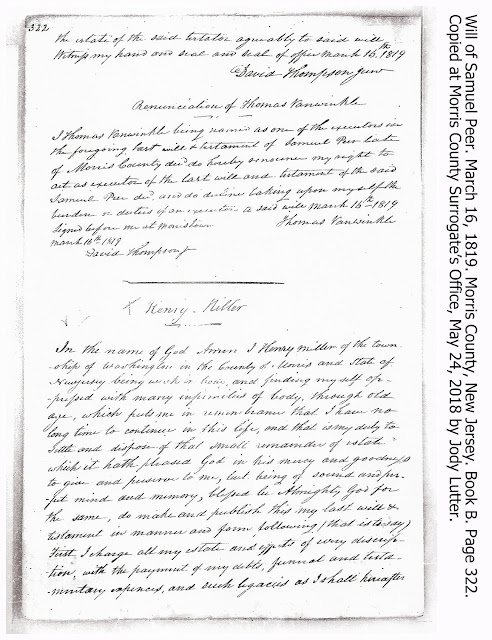 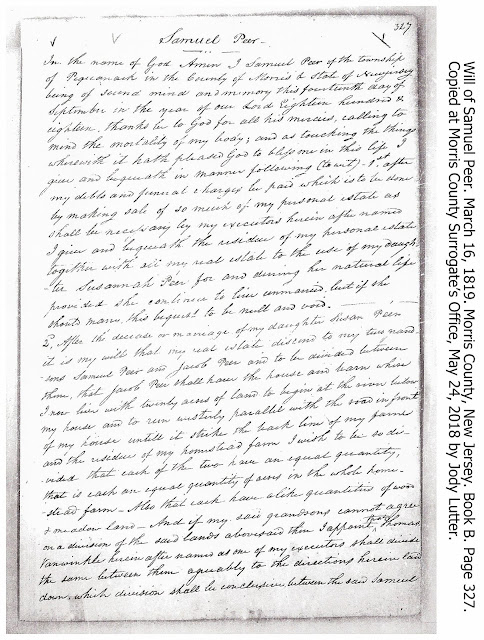 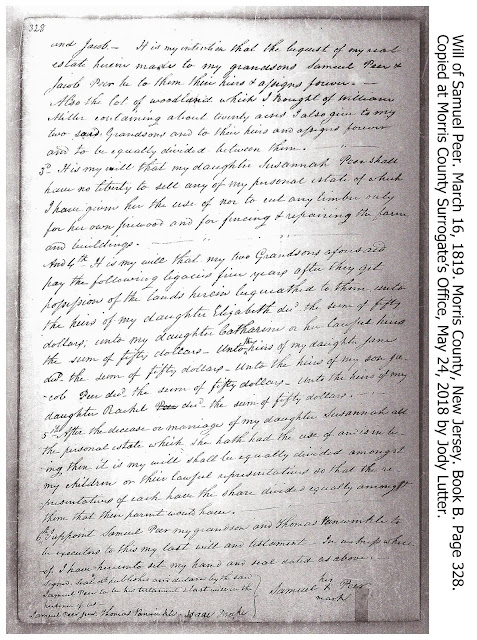 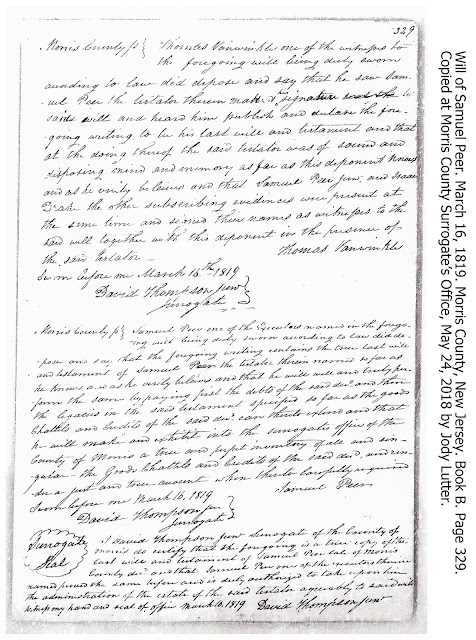