John Preston was the son of Irish immigrants, born around 1860 in New York.  His son, Michael J Preston, was killed by or near a train in Bayonne, New Jersey in 1918.  I previously wrote about uncovering documents that shed light on the family story about Michael's fatal train ride.  The missing part from that story was the dog.  "The dog always went to meet him at the train station.  We knew something was wrong when the dog returned without him that day."  Michael was killed late at night and I hoped that the dog was not supposed to be wandering about at night for Michael.  So who else was killed by a train?

I located the 1928 death certificate of John Preston.  I think that the circumstances of his death would support the dog part of the story.  John worked for the Central Rail Road of New Jersey.  He was about 69 years old on June 28, 1928 when struck by a train in the morning.  My grandmother would have been old enough to remember the dog's return without its master. 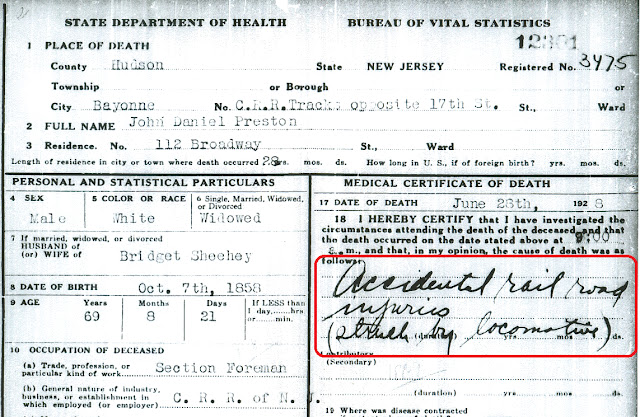