This post expands on the prior piece about using cemeteries to track the movement of ancestors across generations.

My 3X great grandfather, John R Winterton, was born in New York City around 1831.  He had removed from New York City by 1855, when he married Sophia T Walling in Raritan Township, Monmouth County, New Jersey.  When John Winterton died in 1896, he was buried at Green Grove Cemetery in Keyport, New Jersey.

John's parents, Samuel Winterton and Sally Johnson, also lived in Keyport, but were buried in Brooklyn, New York at Green-Wood Cemetery.  So we must look in New York for their records.


Burials at Green-Wood can be searched on the cemetery's website.  A search for Winterton burials produces several people in two different lots. 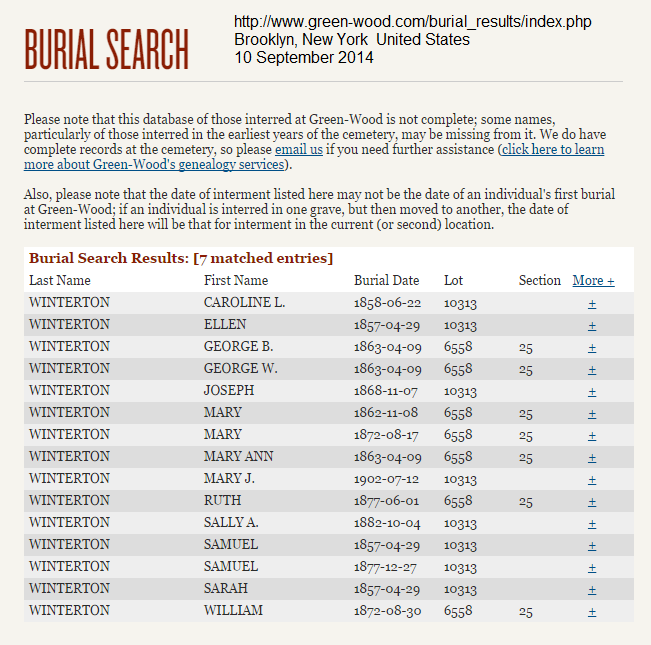 I organized the burials by lot. 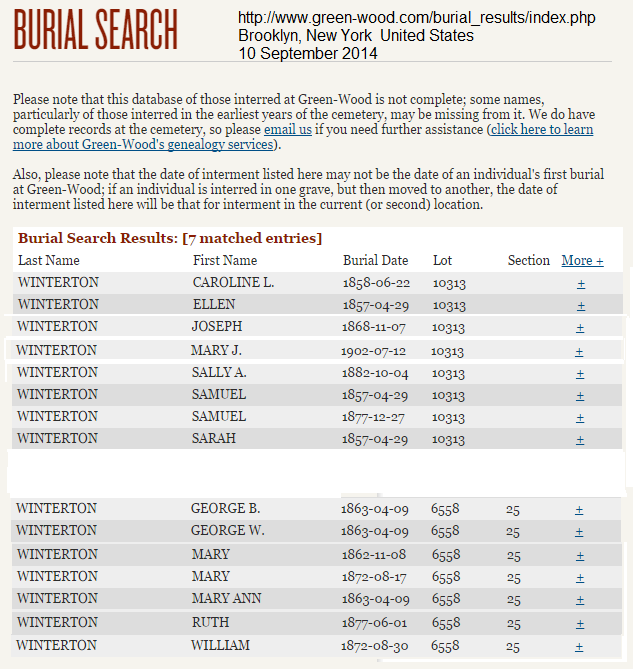 Samuel Winterton and his wife, Sally Johnson, are in lot 10313.  Joseph was a brother of Samuel.  Caroline and Mary were daughters of Samuel and Sally.  That leaves us with three people, Ellen, Samuel, and Sarah, all "buried" on the same date, April 29, 1857.  I do not know who these people are at this point.  This date may be when the lot was purchased or when the record was created.

Lot 6558 contains the mother of Samuel Winterton, Mary, buried in 1862.  This is Mary Bartlett, born about 1769.  Buried with her are three of her children, Mary, Ruth, and William.  We can use the dates of burial to locate death notices in the New York papers.


William Winterton, the husband of Mary Bartlett, is not buried at Green-Wood.  He predeceased her by almost 50 years in 1814.  His burial record is not online on FindAGrave or a cemetery's website.  Instead, a mention of his headstone can be found in older books online under the topics of Newburgh, New York or Baptist churches.


Letters of Administration were issued in 1814 for William Winterton in Orange County, New York.  This is an additional source for his death.

The family relocated to New York City after William Winterton's death in 1814.  In the 1820 federal census, Mary Winterton is head of household in New York City.  Other members of the household are not listed by name, but rather by age group.  The numbers work out for the number of children that I have found so far, but we can never be certain who was actually represented by the enumeration.


This marriage notice provides a useful clue, the person who performed the ceremony, the Reverend Mr. Archibald Maclay.  He serviced the James Street, or Mulberry, Baptist Church in New York City from 1809-1838.  The church morphed into the Tabernacle Baptist Church and then the Laight Street Baptist Church.

Johnson is a common surname, so we need to significantly narrow down our search to find anything useful and plausible.  Sally Ann Johnson was likely a member of the same Baptist church as Samuel Winterton, in Newburgh or New York City.

A possible connection between Winterton and Johnson is in a newspaper announcement from 1855 of a lawsuit in New York City:  Samuel Winterton versus John Johnson and Anna, his wife.  These could be relatives of Sally Ann Johnson, wife of Samuel Winterton. 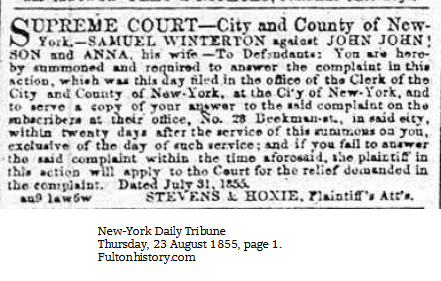 An interesting tidbit about the children of William Winterton and Mary Bartlett:  in 1836, they purchased land in Conway Township, Livingston County, Michigan.  Nobody appears to have moved to Michigan.  I do not know, at this point, why they purchased the land. 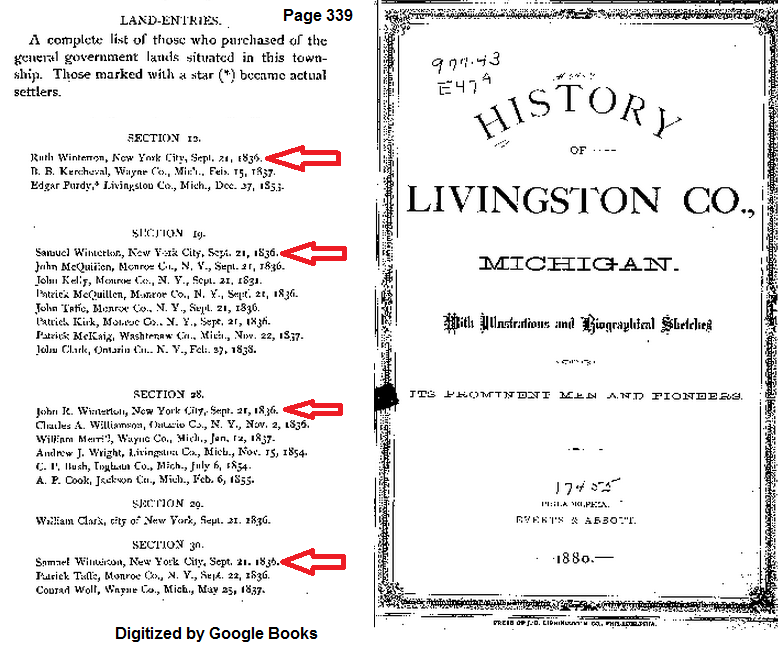