Ezra A. Dunn and his Pottery

Ezra A. Dunn (1821-1898) was one of my great great great (3X) grandfathers.  Last month I visited his grave at Rose Hill Cemetery in Matawan, Monmouth County, New Jersey.  Ezra is buried with his wife, Hermoine Dunlop, and some of their children.

From the 1850s until his death in 1898, Ezra owned and worked at his pottery business in Middletown Point (which became Matawan Township in 1857, but is now Aberdeen Township, Monmouth County, New Jersey).  The business was originally called Van Schoick and Dunn, but morphed into Dunn and Dunlop and then Dunlop and Lisk.  William A. Dunlop (1833-1910), one of the eventual owners, was the brother of Hermoine Dunlop, wife of Ezra A. Dunn.

An example of the pottery can be found at this online auctioneer or here.  Ezra painted the images on the pottery.

I found a picture of the Pottery workers, circa 1870, in the book, Images of America, Around Matawan and Aberdeen.  Ezra Dunn is supposedly one of the people in the picture, but I don't know which one. 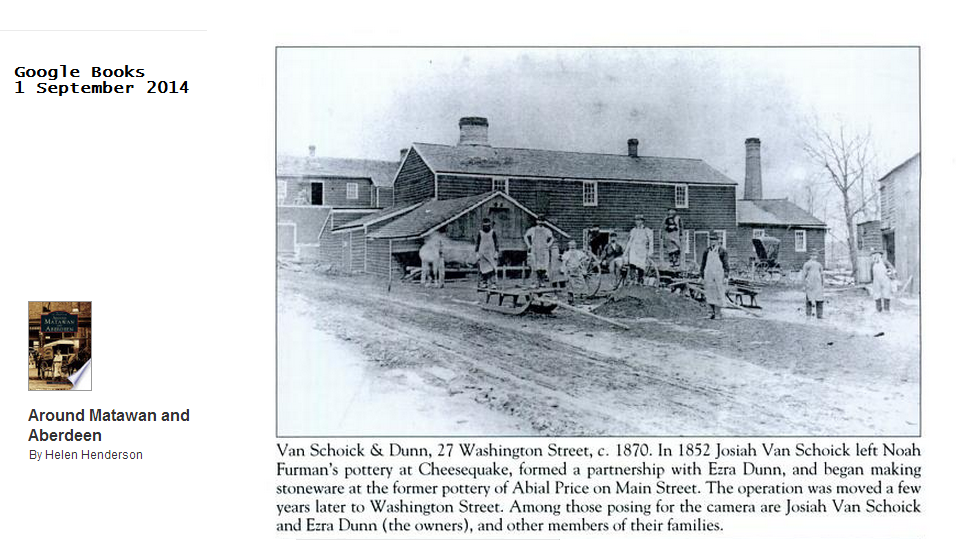 I don't know where Ezra Dunn came from.  On his death certificate from 1898, his parents are listed as Nathaniel H Dunn and Sarah.  I need to explore the business partner, Josiah van Schoick, as well as Ezra's wife, Hermoine Dunlop.

The Monmouth County Historical Association has the books from this pottery business.  I was able to go through them. 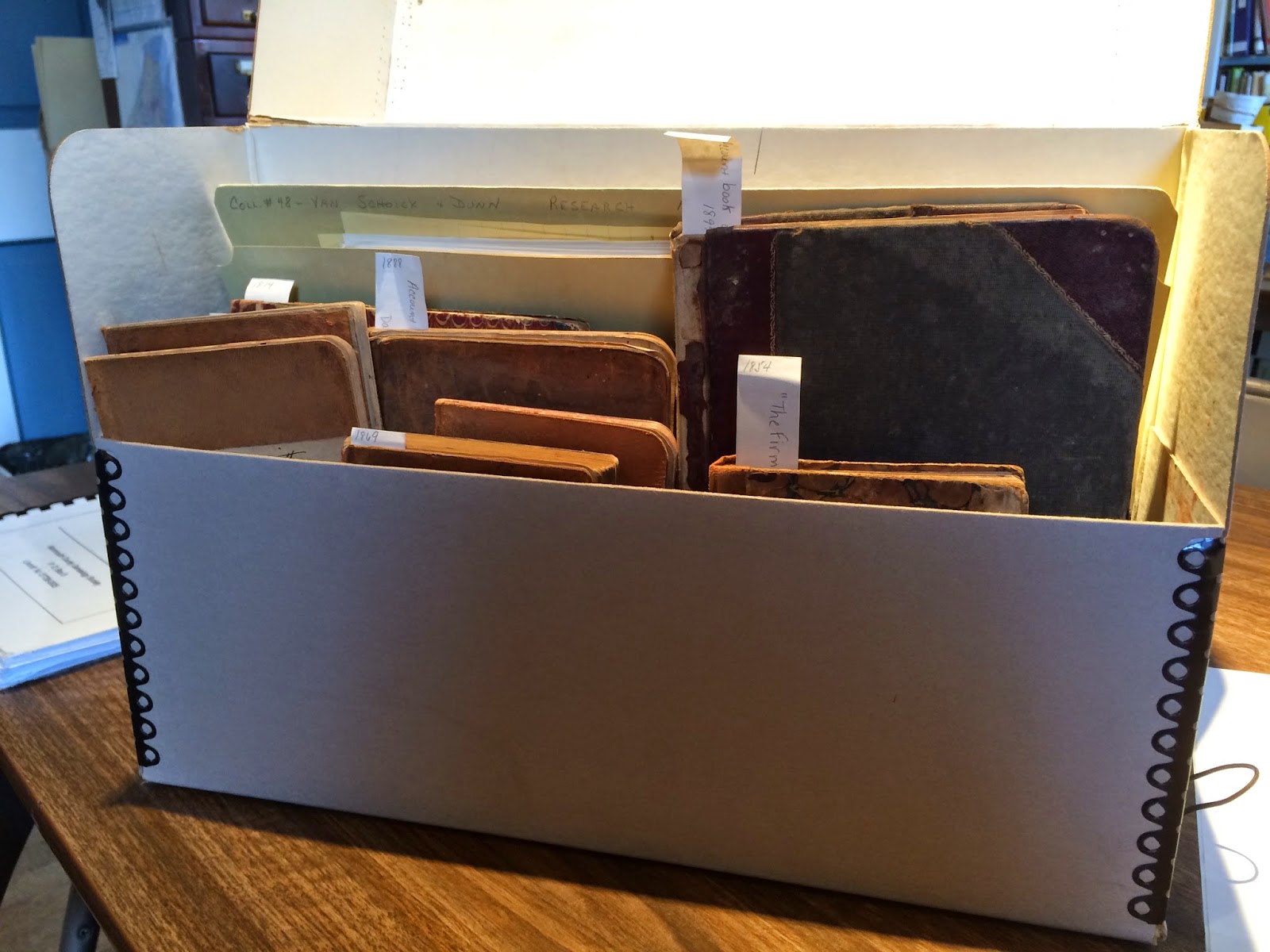 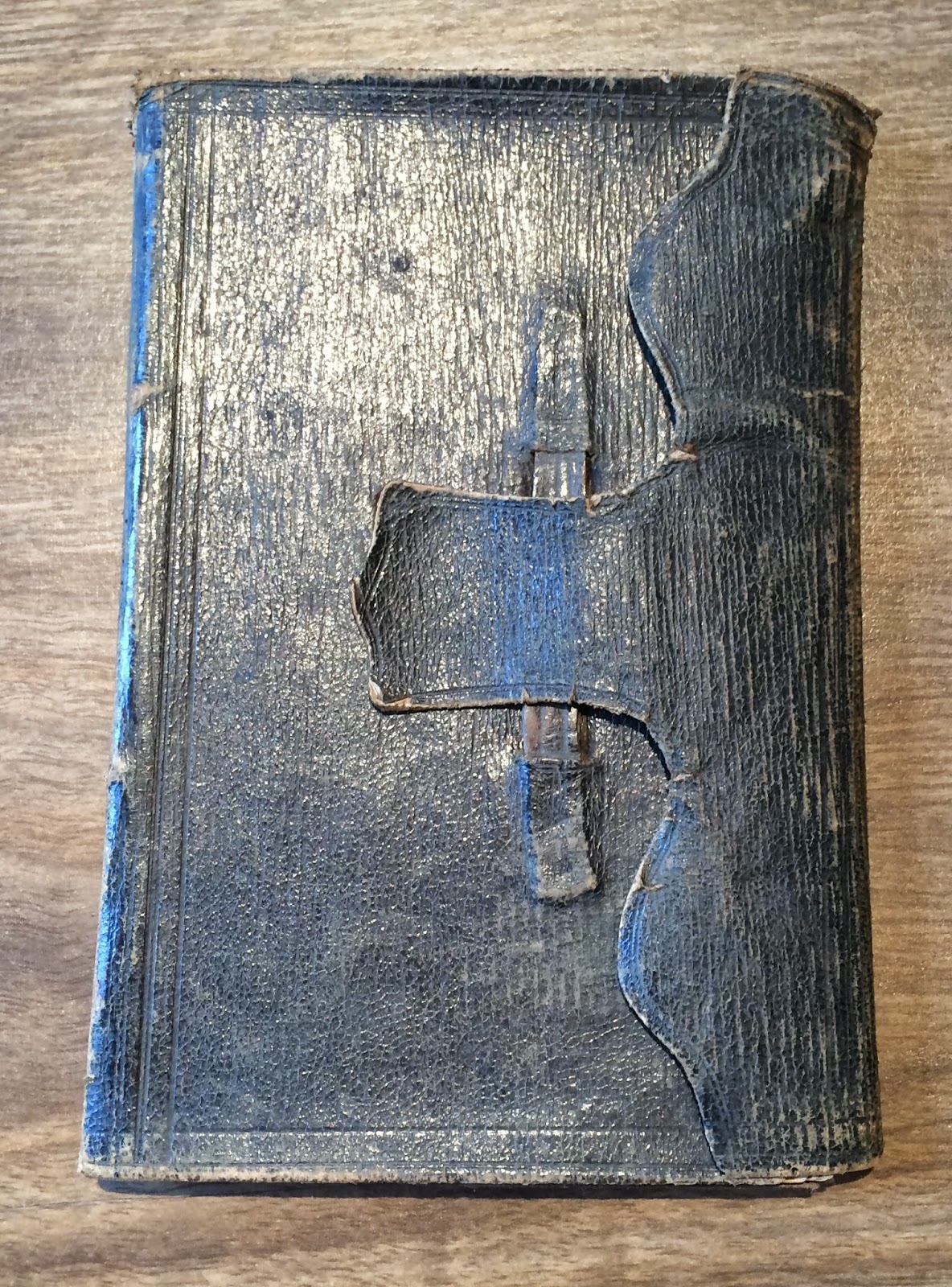 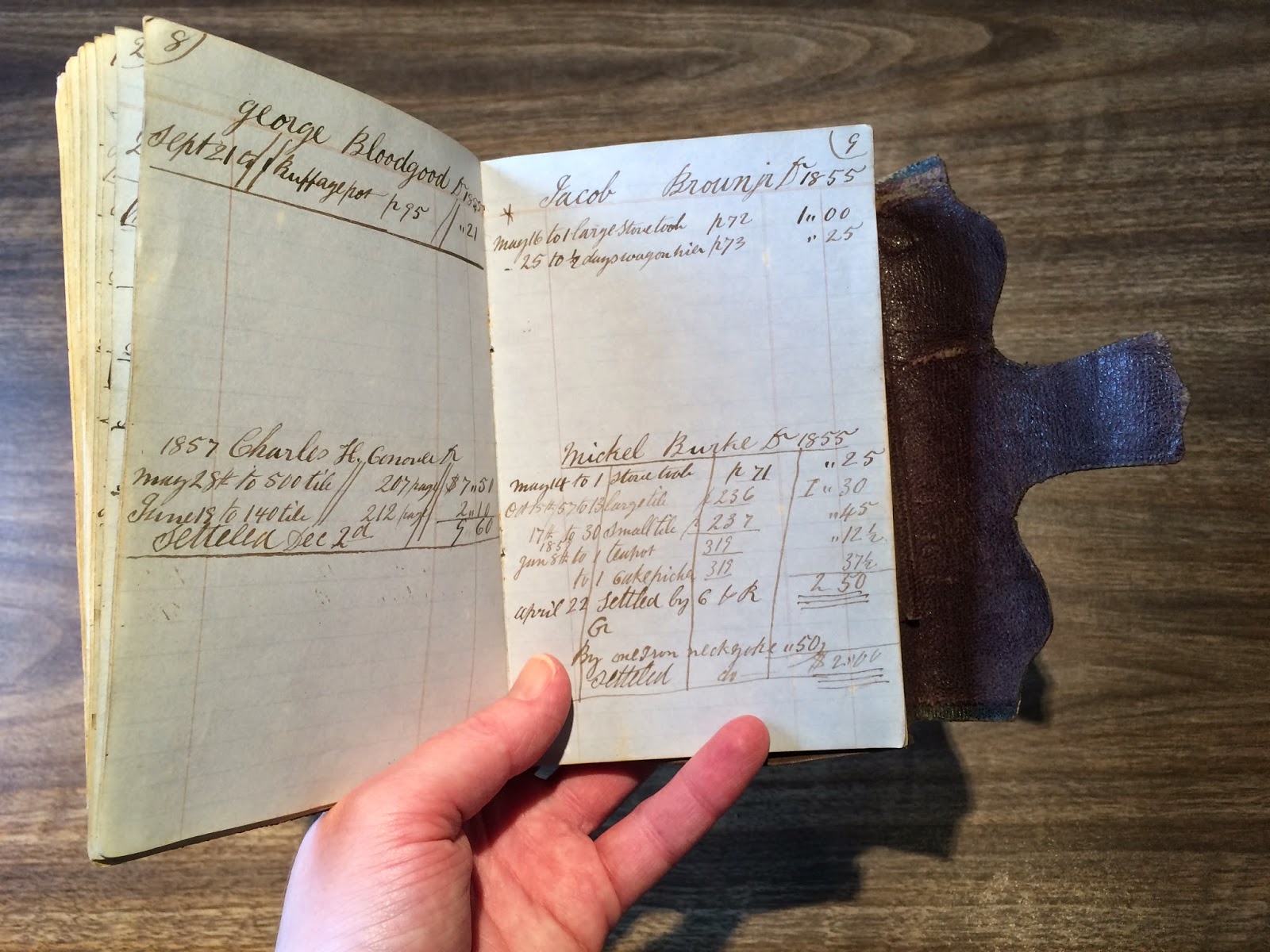 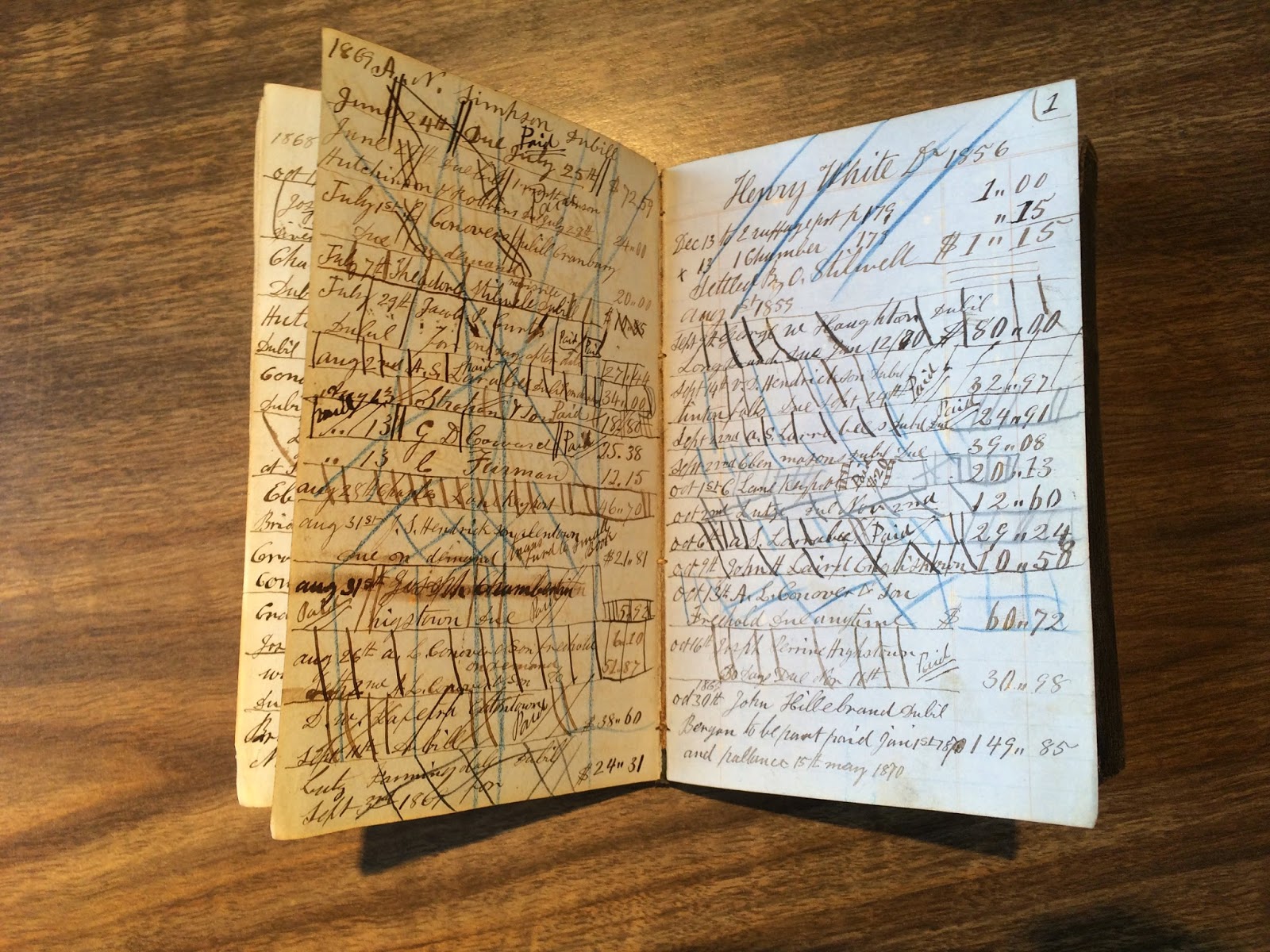 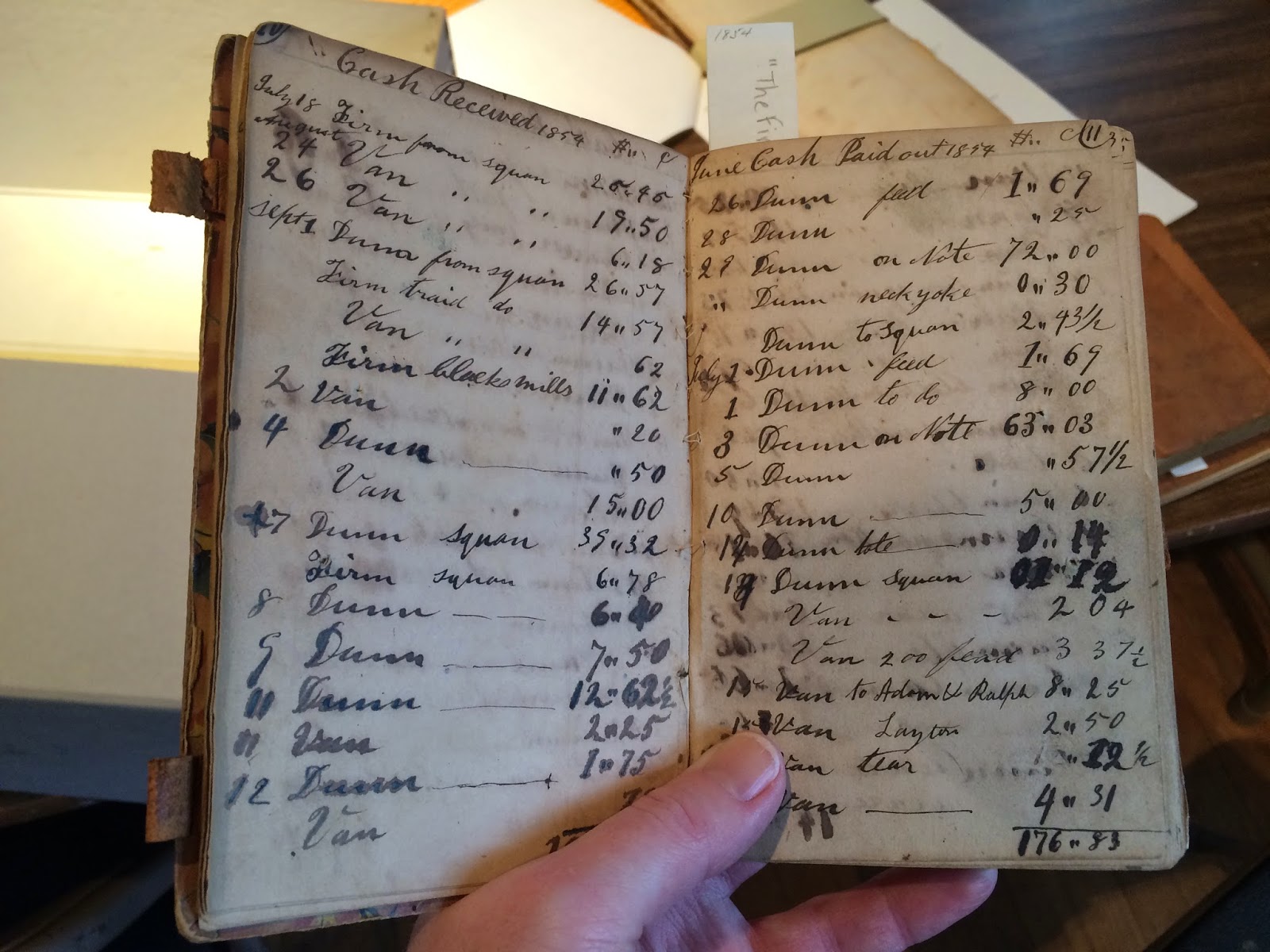 The books look and feel quite old.  Inside are manual ledgers of accounts receivable and payable.  The customers are listed with their addresses and dates of purchases and payments.  Someone could go through these and transcribe the people in these books- a great way to place someone at a location in a given month and year.

It is amazing and fortuitous that someone kept these records and then donated them instead of tossing them.