Someone with a Lutter ancestor has appeared in my DNA matches (autosomal) from AncestryDNA.  This has never happened before.  (Even the Y-DNA test produced no matches.)

The family tree for this DNA cousin had one Lutter ancestor, Emma Lutter, from Illinois.

I know this Emma Lutter.  She lived in Chicago and married Frank Scaar.  I have Emma's bank book from the year 1907.

The bank book for Emma and her siblings, Adolph and Gertrude, were not handed down to me as family heirlooms.  They were purchased on eBay.

The bank books caught my attention because I researched a man named Alex Lutter from Chicago.  Emma, Adolph, and Gertrude were his children.  I was looking for Alex Lutter because he witnessed the marriage in 1888 in Newark, New Jersey, of my great great grandparents, Hermann Lutter (1860-1924) and Clara R Uhl (1864-1955). 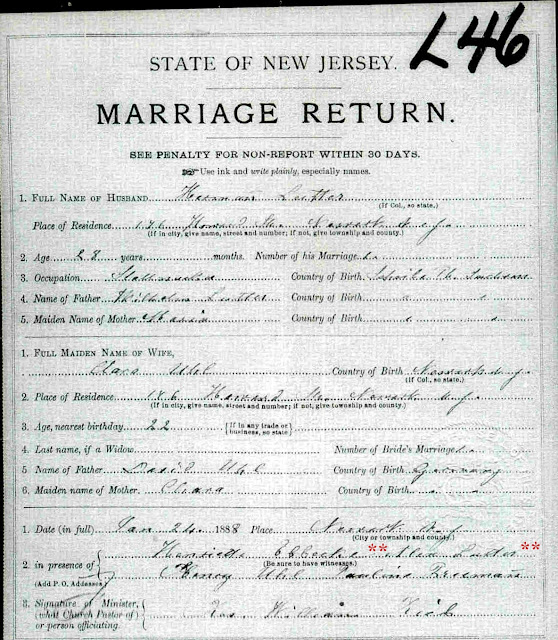 Aside from this marriage record and the newspaper announcement of the nuptials, I found no traces of Alex Lutter in Newark, New Jersey.  Instead, I found a man named Alexander Lutter in Chicago.  In 1890 he naturalized, registered to vote, and married Ottilie Dahlke. 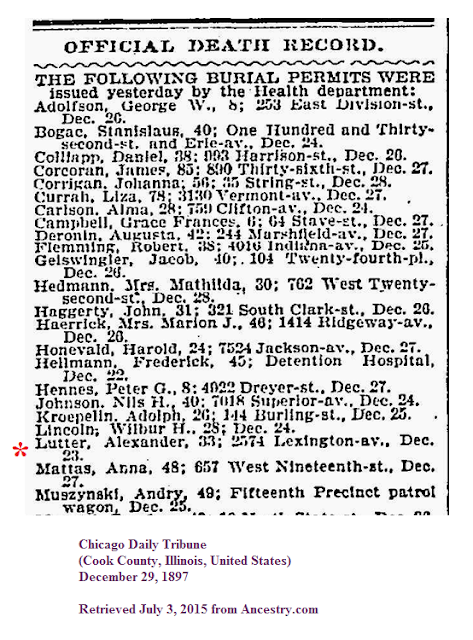 Alexander Adolph Lutter (1895-1969), the son of Alex and Ottilie, married Anna Kabitzke.  Anna's family contacted me.  The couple had no known children.  (Her relative was the first to write a guest blog post.)

Alexander the son filed for a passport.  Below is his photo from the application.  Alexander wrote that his father came to the United States from Germany in 1885 and resided in Chicago, Illinois for "12 years, uninterruptedly," from 1885-1897. 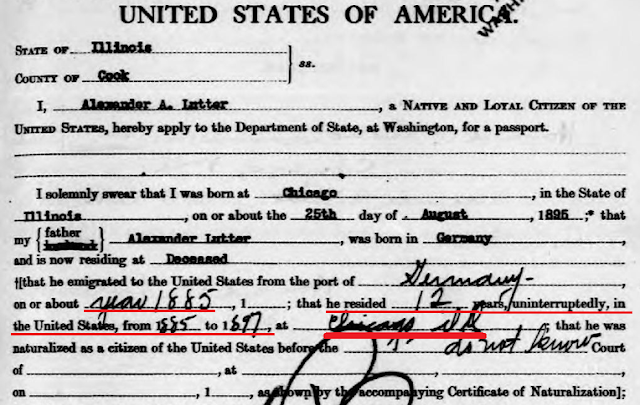 If the father Alexander lived in Chicago from his arrival in 1885 until his death in 1897, this contradicts the voter registration from the year 1890, where Alexander is stated to have lived in Illinois for only one year.  Then I considered the source and decided that this information was not too reliable:  the informant was not even born until 1895 and was two years old when his father passed, so he likely has no personal knowledge of his father and no older relative to ask.

So how is Alexander Lutter (1864-1897) of Chicago related to my Lutter line of Newark?  We don't know- yet.  Let's hope that the submitter of the DNA contacts me and provides more clues.

With a birth date in 1864, Alexander Lutter could be the brother of my great great grandfather, Hermann Lutter, who was born about 1860.  In his will in 1924, Hermann mentioned two siblings, both deceased:  his brother Otto (1845-1909), formerly of Harrison, Hudson County, New Jersey; and his sister, Ottillia, formerly of Neuhaus, Thueringen, Germany.  If Alexander is another sibling, why was there no mention of Alexander or his children, three of whom were alive in 1924?