Cousin from the Dunn and Dunlop Branch

A close cousin on my father's side appeared among the DNA matches at 23andMe.  This person also matches all three of his siblings, as well as their father's first cousin.

We do not have to look at my father's entire family tree for the connection to the DNA cousin.  We can concentrate on the branch that my father has in common with his father's first cousin.  I made a diagram and I hope this helps people understand how to do this with their own DNA matches. 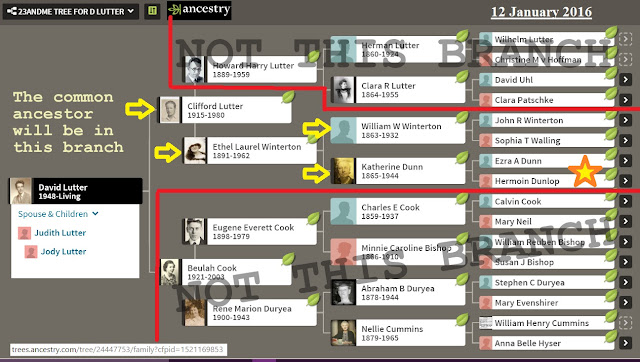 As you may have read, the 23andMe site is morphing.  I manage several accounts and none of them have completely evolved.  What I see on my end are new matches, but I cannot contact them.  The ones with names lead to a "page not found," while the anonymous matches cannot be contacted.  This new close cousin is anonymous, but she left her year of birth and some family surnames that I can see. 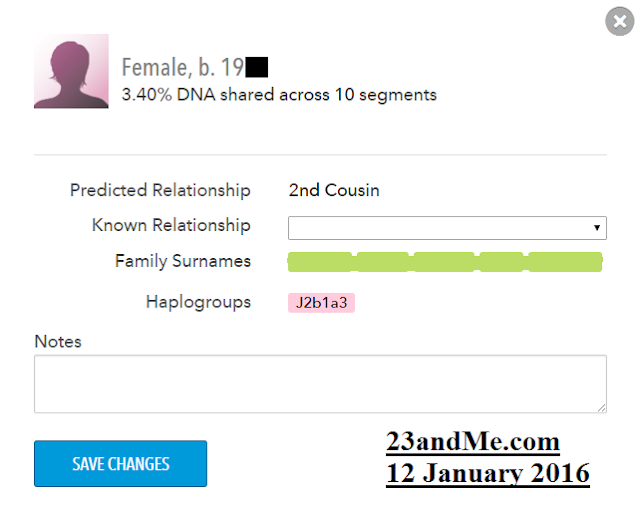 Based on the surnames she provided, we may be fourth cousins.  I predict that we share a set of great great great grandparents, Ezra Dunn (1821-1898) and Hermoine Dunlop (1827-1900) from Matawan, Monmouth County, New Jersey.  I descend from Ezra and Hermoine's daughter, Katherine (1865-1944), while this mystery cousin descends from another daughter, Violet (1873-1931).  Dunn and Dunlop were not among the surnames she provided, though, so either I have the wrong cousin, or our common ancestors are behind a brick wall for her, or she did not list all the surnames she knows.

The point of continuing on this DNA journey with this close cousin is to utilize the identical segments of DNA.  She shares ten identical segments with my grandfather's cousin!  (23andMe used to require that people "share genomes" to see these identical segments.  I have no such option with new matches- I can't contact them.)  We can attribute those ten segments of DNA to our ancestors, Ezra Dunn and Hermoine Dunlop.  More distant cousins will also match on these same segments, usually in smaller pieces.  Just as I did in the above family tree diagram, we can look deeper into the trees of Dunn and Dunlop and work with the distant cousins to figure out their relation to my family.