My genealogical research has been enhanced through the use of DNA studies.  Several relatives have kindly submitted their DNA to help me gather both known and unknown branches of the family tree.  Increasing numbers of people are testing their own DNA for different reasons.  Some methods of analyzing the results are provided by the testing companies themselves, while other tools are being developed by (extra)ordinary people.

This weekend I had the pleasure of learning about a new tool developed by Kitty Cooper:  Chromosome Mapper.  (This is for autosomal DNA results and not Y-DNA or mitochondrial DNA tests.)  I was introduced to the idea of colorfully mapping the chromosome by Jim Owston.  The purpose of mapping a chromosome is to visually identify which pieces of DNA came from which ancestor, thereby helping you identify ancestors in common with your genetic distant cousins.

[Here's the short technical aspect:  to use the Chromosome Mapper, you first need to have your autosomal DNA tested, obtain the results, and then identify ancestors in common with some of your matches.  From there, you need to create an Excel spreadsheet of the matches and the MRCA (most recent common ancestor).  If no close relatives have tested and you have not identified the MRCA of any match, then you cannot map your chromosomes.]

My father, David Lutter, has three cousins tested from his mother's side and one cousin from his father's side, so the common ancestors were already identified.  Plugging their numbers into the Chromosome Mapper produces a useful visual tool.

When a distant genetic cousin matches David and one of his known close cousins on the colored areas shown above, we know which branch of the family holds the common ancestral line.


In the fan charts above, the females are indicated in pink and the males in blue.  The chart extends to David's great great great grandparents.  Please note the white boxes, indicating an unknown ancestral line.  It is entirely possible that the most recent common ancestor of David and a distant genetic match lies beyond this unknown area.

The Chromosome Mapper allows for a lot more ancestors and colors, so I plugged in my own matches using my mother's and father's matches.  (I omitted my paternal third cousin, once removed.  I share no DNA with him from our known common ancestors, Mary Neil and Calvin Cook.  Instead, we share a small segment that I inherited from my mother.  At this time, we do not know the common ancestors of my father's third cousin and my mother, but by testing my mother's cousins, we know that the match will be in her Joyce/ODonnell branch.) 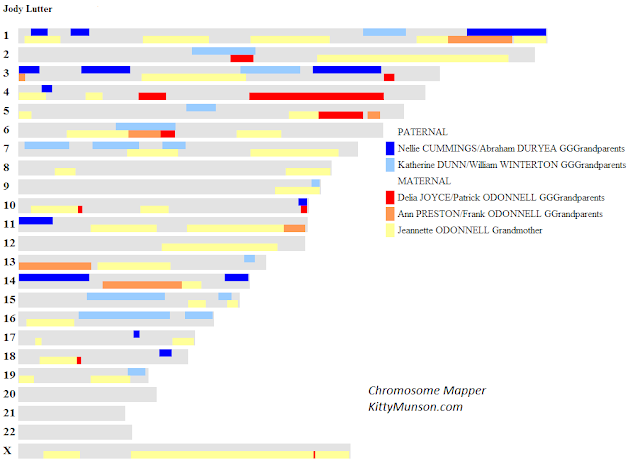 Several chromosomes show two colors in the same area because they are showing both the maternal and the paternal sides of the chromosome.  I think that this is so neat to be able to visualize which areas of my DNA came from which ancestors- people I can never meet because they are long gone.

Both of my parents have tested their DNA, so most of my matches can be quickly assigned to either the paternal side or the maternal side.  A few people match me but neither parent, while several people match both my parents!  My grandparents are all deceased, so dividing my parent's matches into their paternal and maternal sides becomes challenging.  Testing cousins from different branches of the family tree narrows down the possible areas in which to look for a common ancestor to a distant genetic match.

While studying my Chromosome Map versus my father's Map, I realized that I will have overlapping or common areas of match on my maternal line.  This is because all of my mother's relatives who tested descend from the same set of ancestors, Delia Joyce and Patrick ODonnell.  23andMe provides a mapping function, limited to three comparisons.  Here is my map of my maternal matches (one person in each category).


And here is the same mapping from Kitty's Chromosome Mapper:

With the goal of narrowing down which branch of the family holds the Most Recent Common Ancestor, I would prefer to see the areas where I match the most distant generation (a set of great great grandparents/dark blue) dominate.  The longest segment appears instead of the shorter segment, regardless of generation.  Any DNA from these great grandparents (green) was passed down to me through their daughter (light blue), so those two colors actually represent the same branch.  The useful function is to further differentiate the DNA from these great grandparents (Delia Joyce and Patrick ODonnell) into my great grandfather (Frank ODonnell).  I can manipulate which information I put into the Chromosome Mapper.  By adding the areas of match for two cousins of my grandmother's generation, the DNA that they both share with me combines into extended dark blue areas, representing some of the DNA I inherited from my maternal great grandfather, Frank ODonnell.

Great work, Kitty.
Posted by Jody Lutter at 1:01 AM