I used the new Find A Grave mobile app!  This is an eagerly awaited, highly useful tool.  The website and app are both free.

I have not posted much on cemeteries lately because of the perpetual blanket of snow on the ground.  Most of the snow has melted now.

You can use the app to locate a cemetery using the map feature.  You can also add new graves and add information to existing entries, including GPS coordinates.


I visited Mount Hebron Cemetery in Montclair, New Jersey.  I found a new occupant and used the app to see if a memorial had been added.  It had not.  So I went ahead and created a new memorial right there in the cemetery using the app. 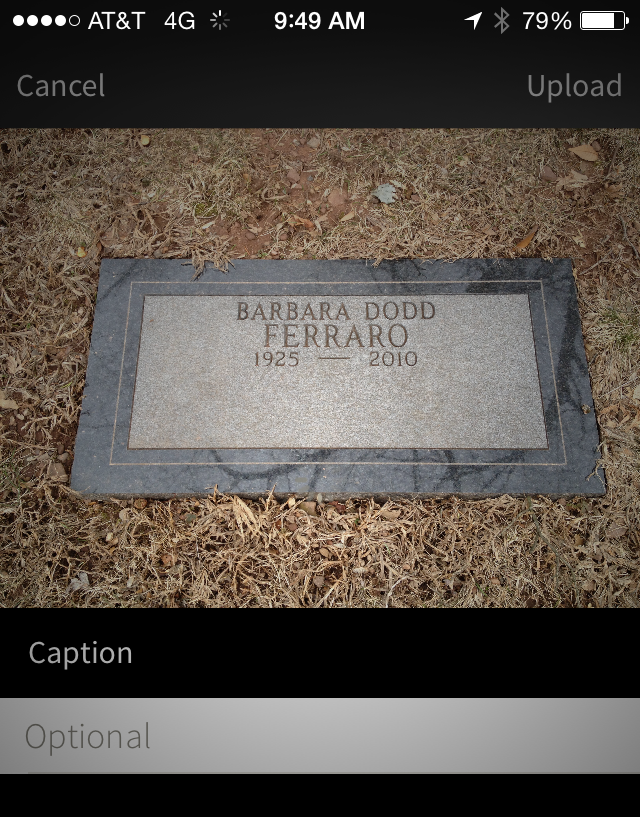 I added the name, birth and death dates, and a photo- at which point the phone became stuck on the upload.

Then it started to rain. 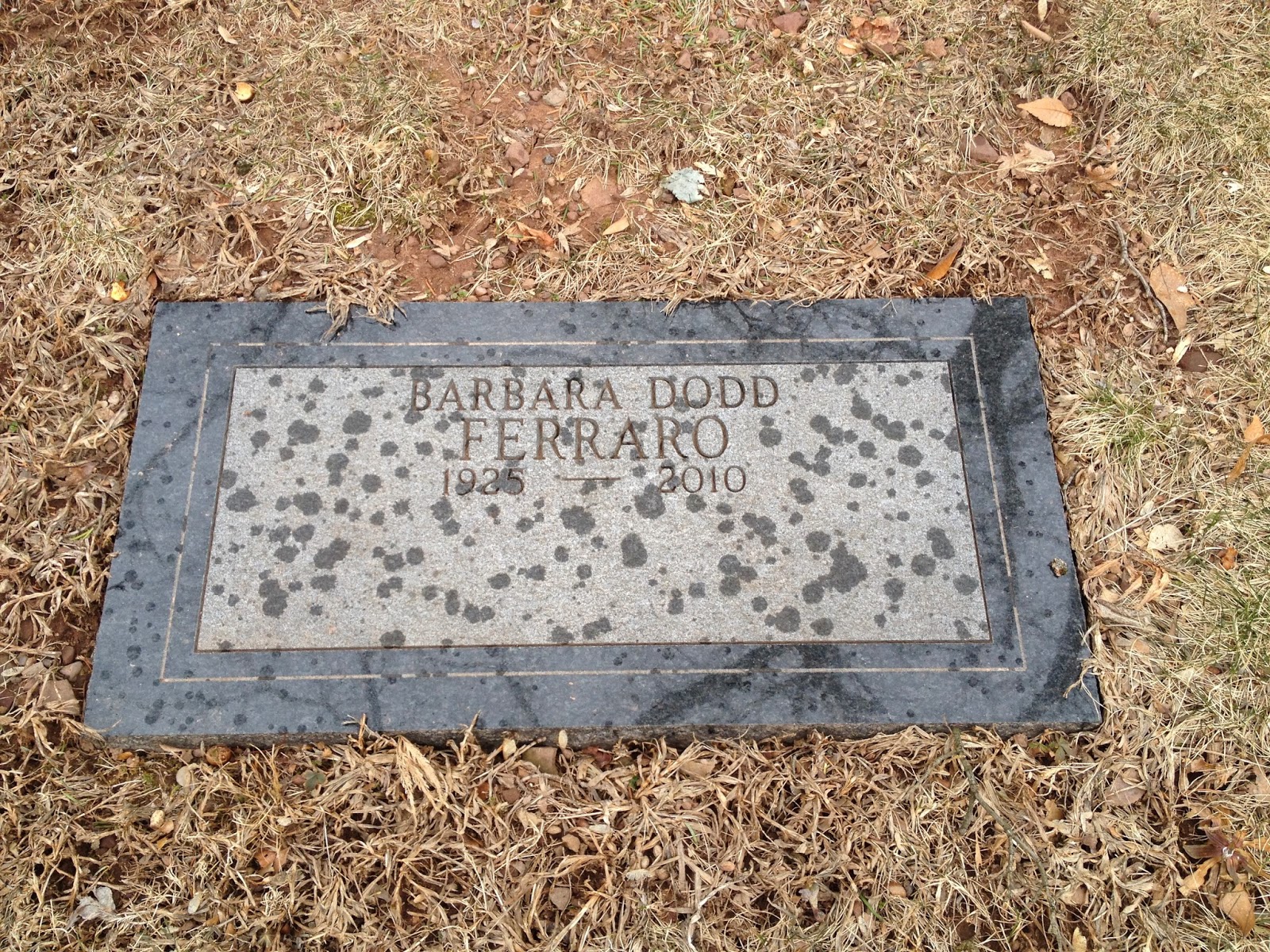 I snapped a picture of the surrounding area, which is a good idea to make it easier to locate the grave for anyone's future visit. 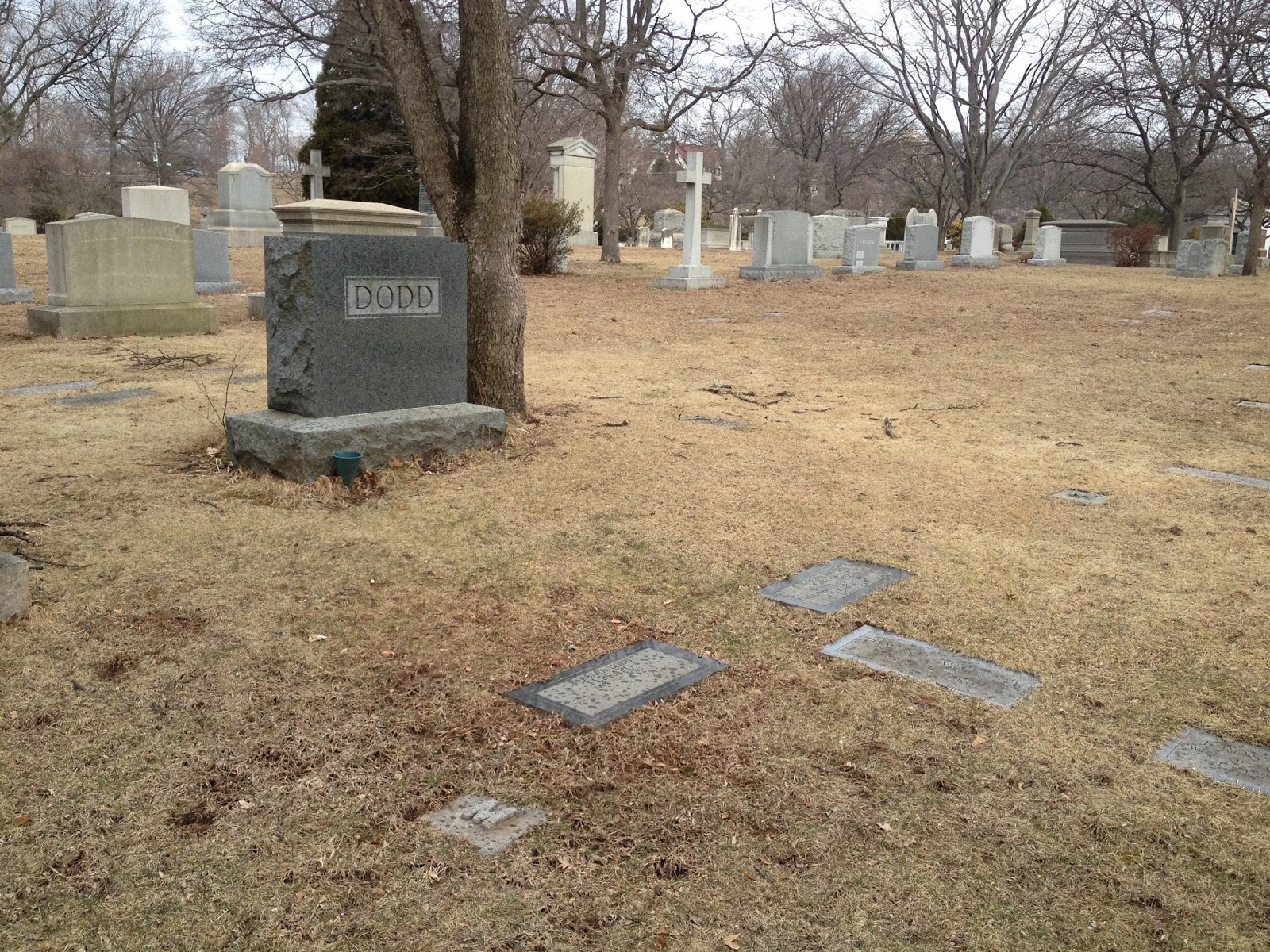 At home, on a wi-fi signal, I tried uploading the photo again and received a Successful message. 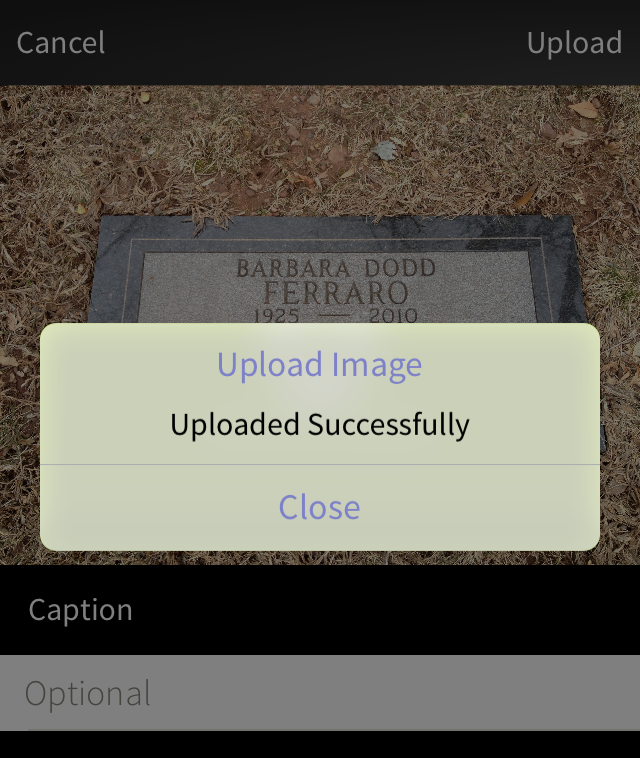 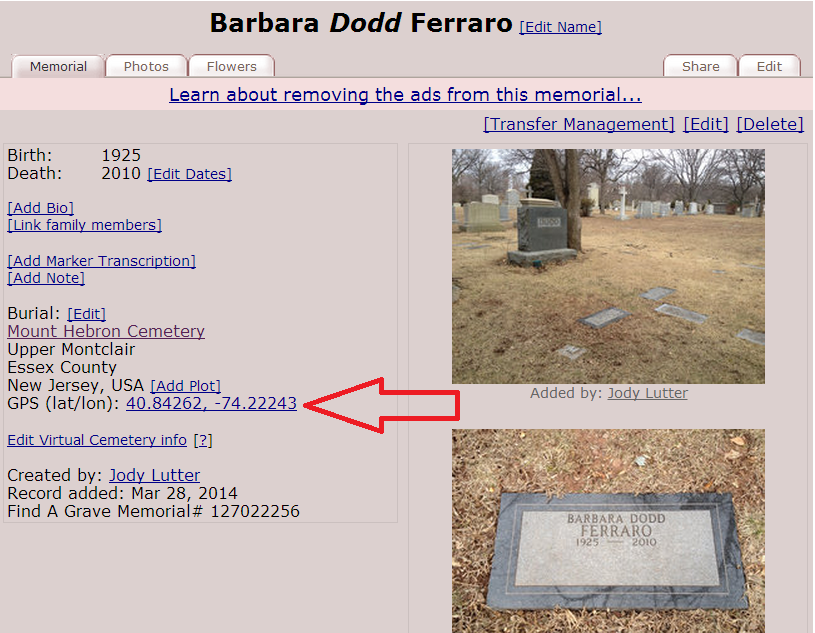 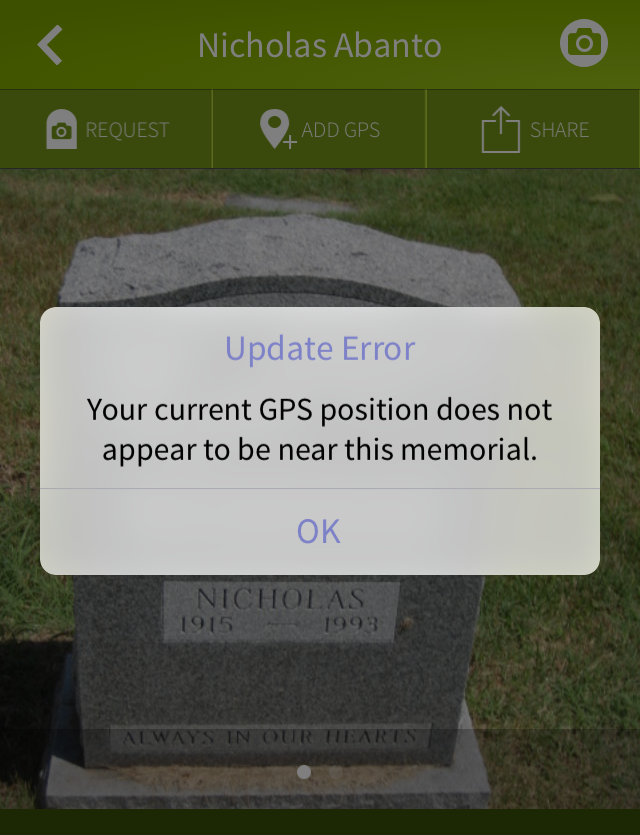 Posted by Jody Lutter at 1:35 AM No comments:

Someone shared with me records from a locally abandoned prison complex, Essex County Penitentiary, later used as the Annex, in North Caldwell, New Jersey.  After people ceased to use the buildings, they fell into disrepair and people took unofficial tours of the historical grounds.  Records were left behind and sometimes people find them at garage sales in the area.  Great pictures of the buildings before demolition can be found on Abandoned But Not Forgotten; about halfway down are pictures of records left behind.  These lost records tell personal stories of local history.

The records are files of two inmates who arrived at the penitentiary on the same day, March 6, 1931.  These would be wonderful for their families to see.

Elizabeth Jackson, age 22, of 42 Shipman Street in Newark, was sentenced to four months for the crime of fornication.  (Can you imagine a time when this was a crime punishable by jail time?  This woman's jail records paint a personal picture of this prosecution.) 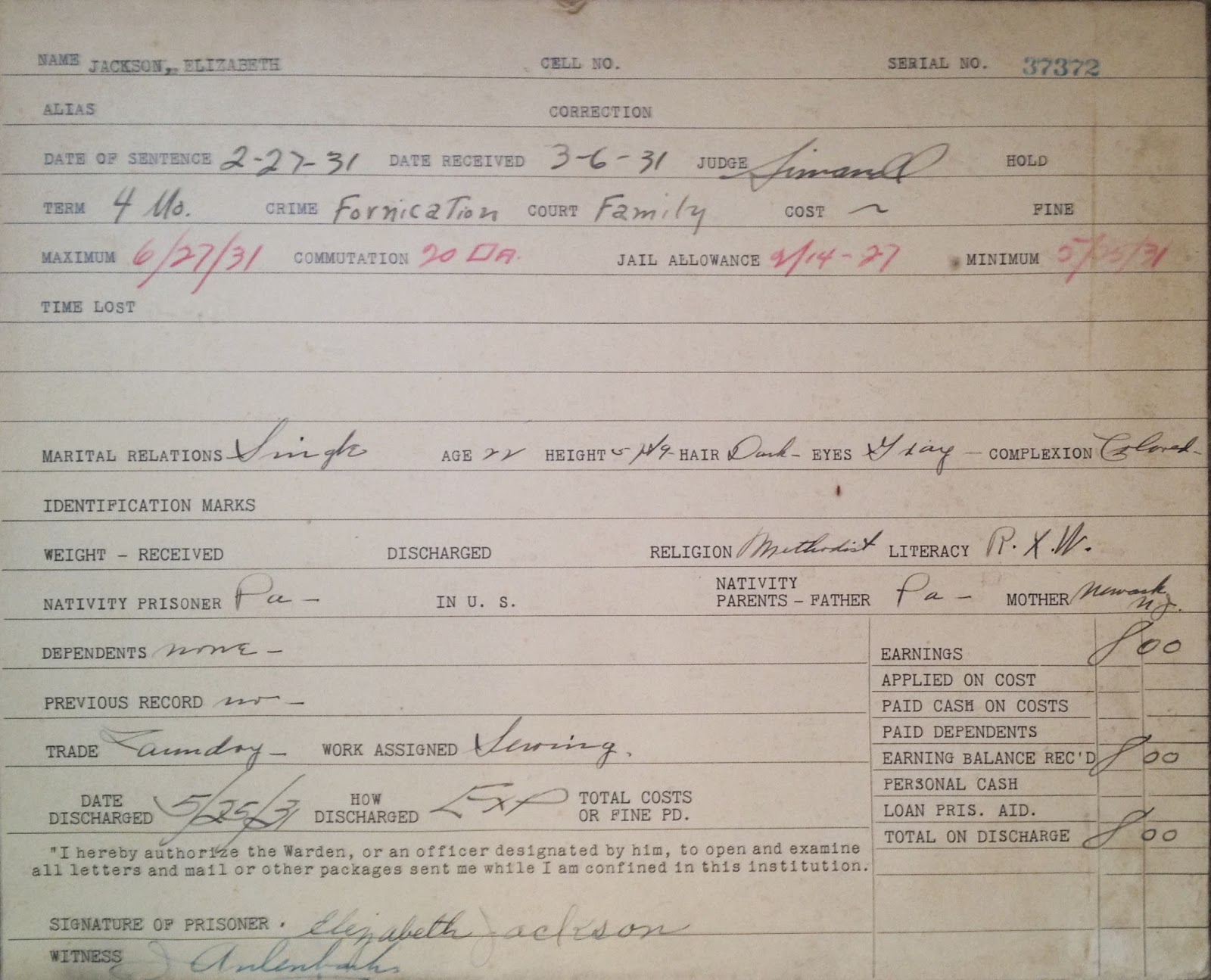 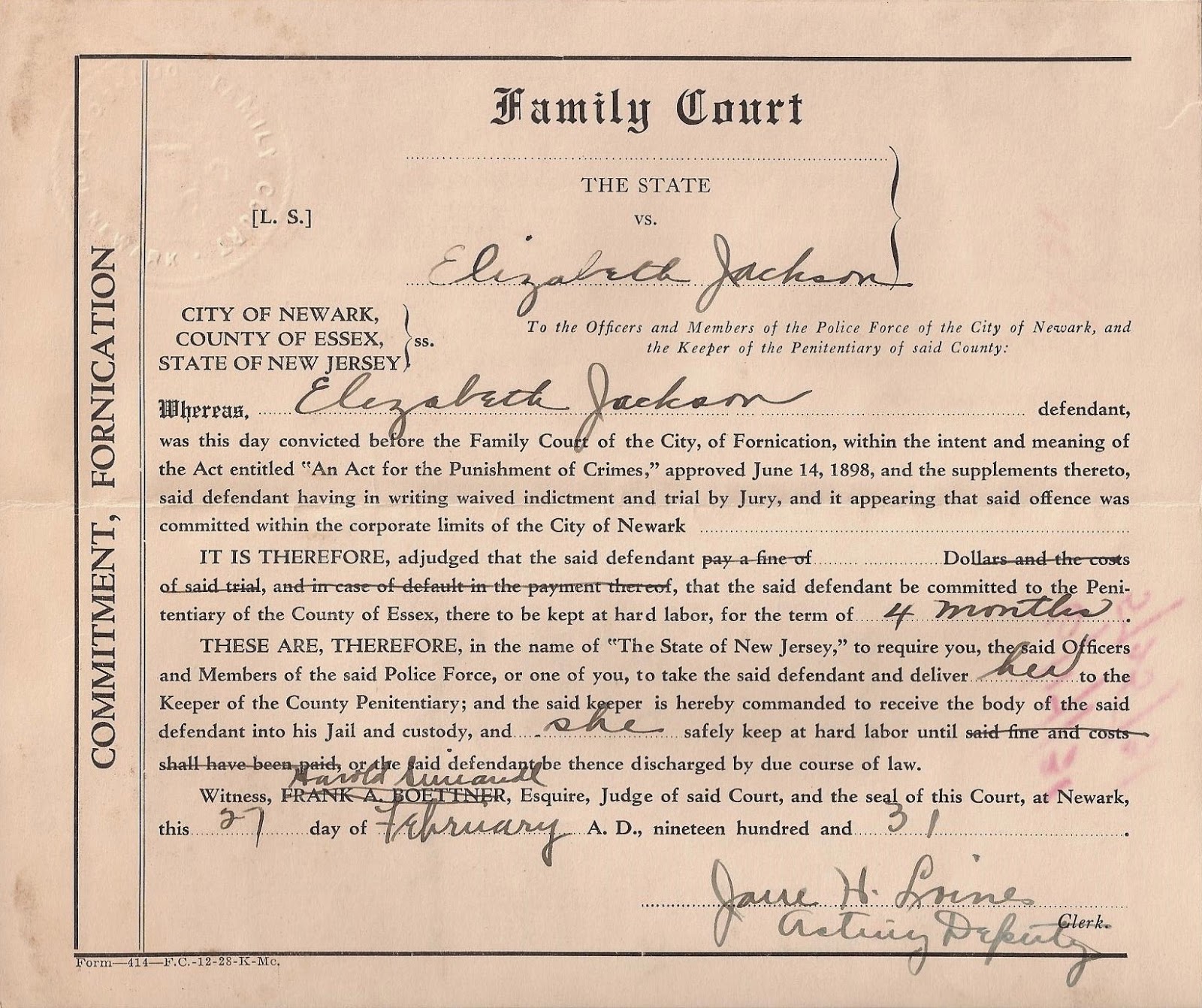 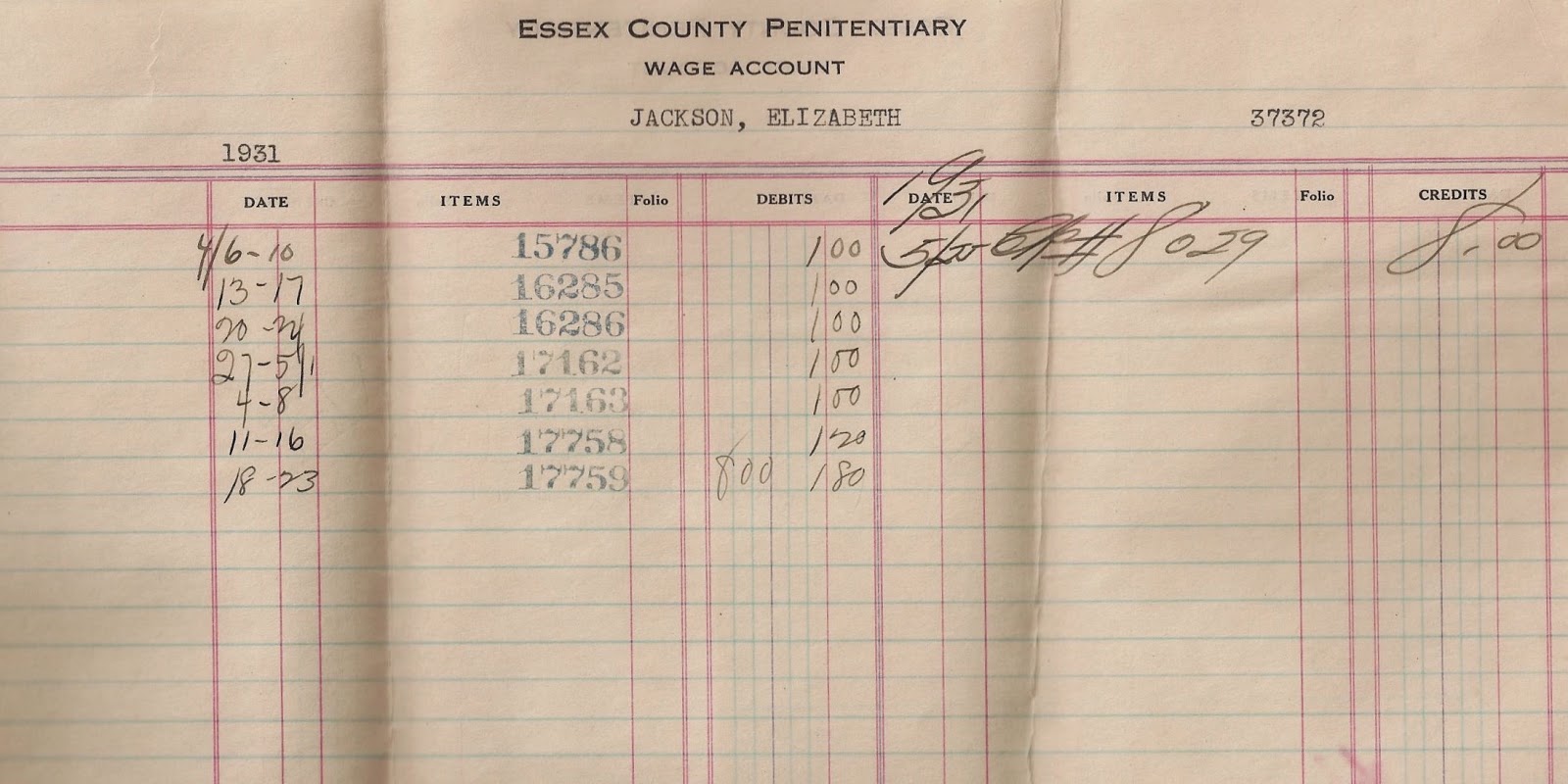 Sarah Steward, also known by other names, including Watkins and Douglas, age 25, of 274 Prince Street in Newark, was sentenced to three months for the crime of adultery.  (Makes you want to know who the married man was and how this act was discovered.) 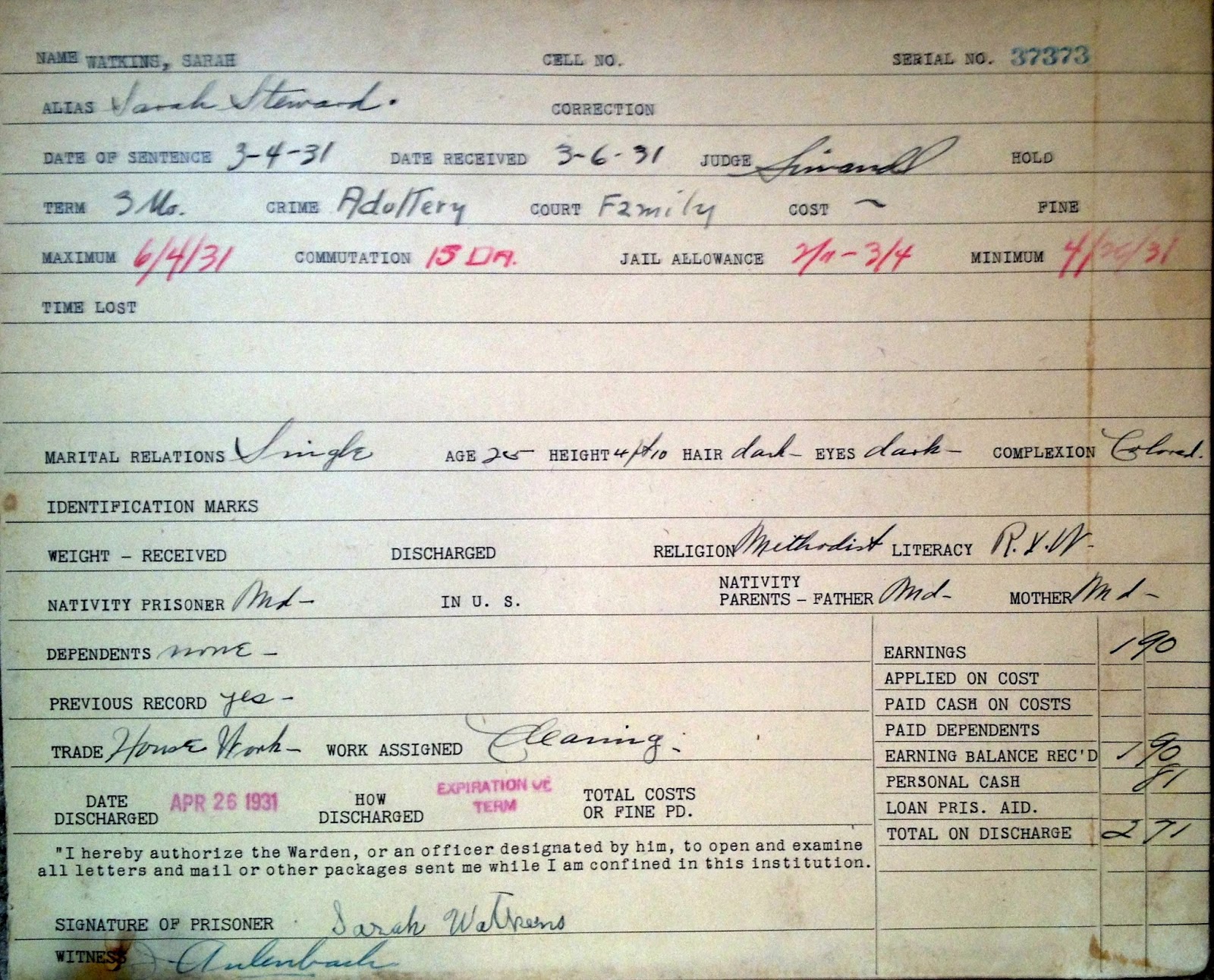 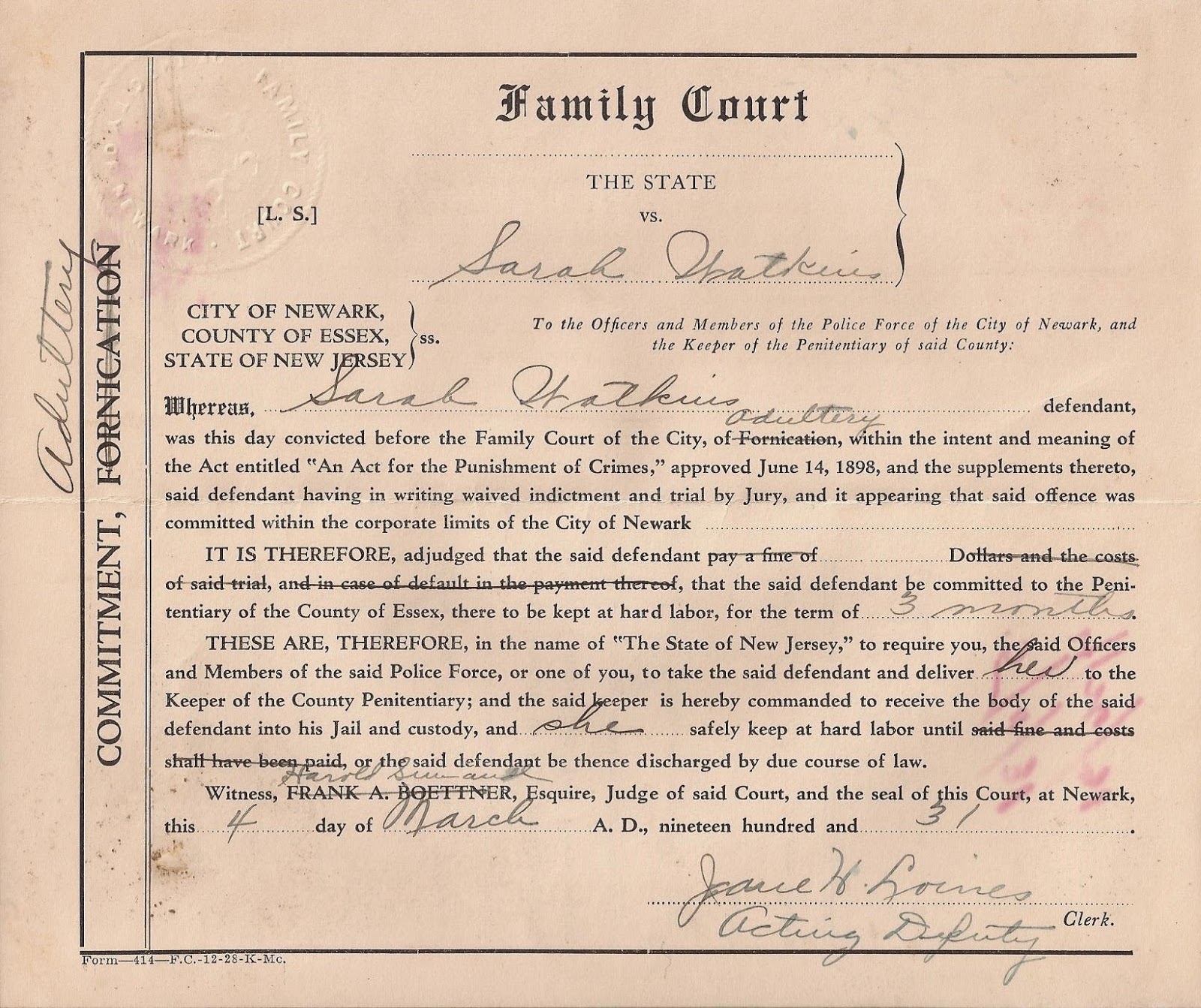 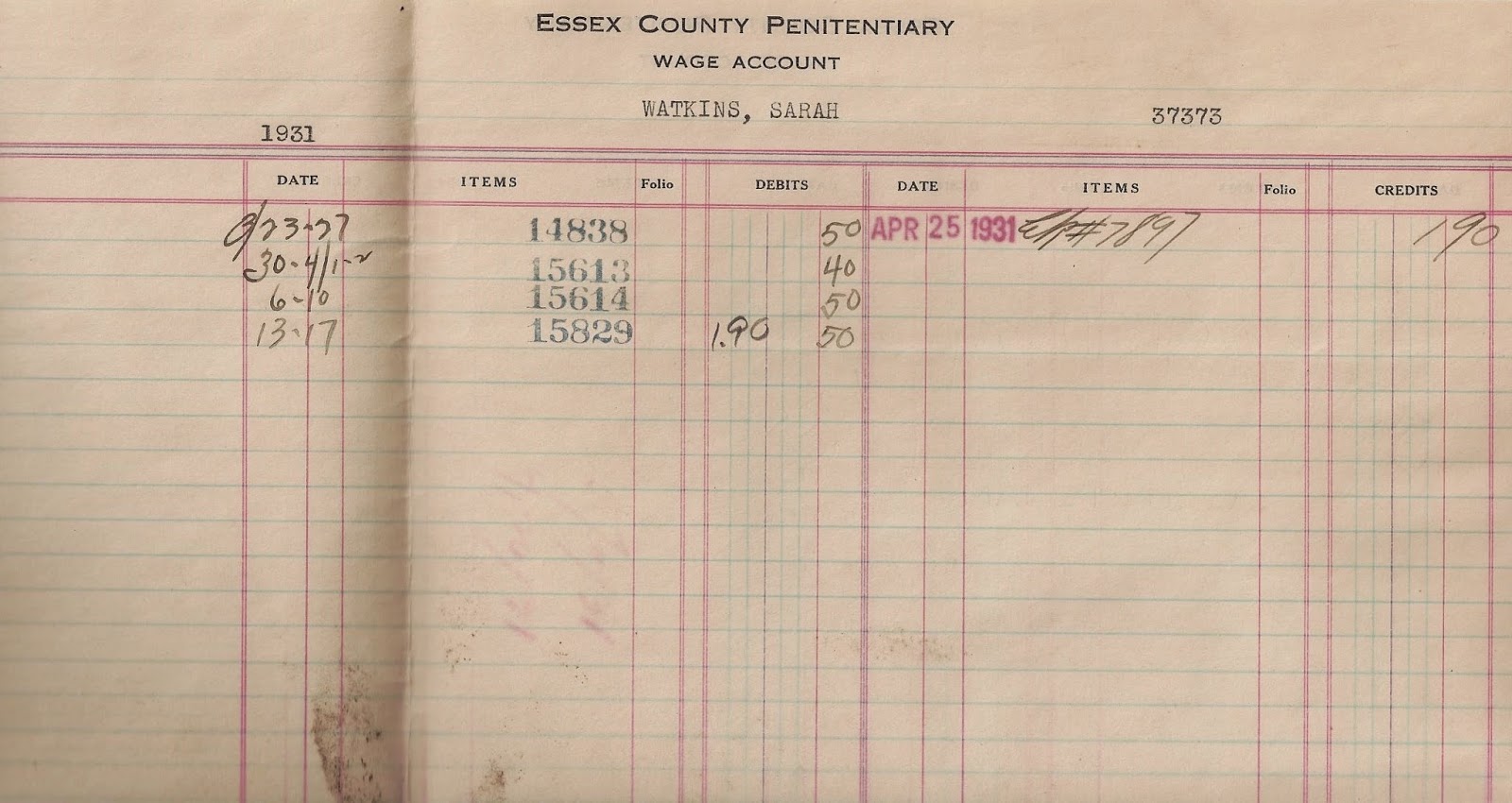 In researching both women, I found only one other record for Sarah Steward.  In the 1930 federal census, she was also in this jail, as per the warden's letter, and is enumerated on that schedule.

Posted by Jody Lutter at 8:48 PM No comments:

Finding a Hometown in Ireland

My grandmother's grandfather was Patrick O'Donnell.  He was from "Ireland," which is not surprising or helpful with such a name.  Without a town, it is impossible to locate with any certainty the correct Patrick O'Donnell in Ireland.  He died in Bayonne, Hudson County, New Jersey- United States- in 1931.  His records on this side of the pond do not specify a place of origin in Ireland.  I found a sister of Patrick named Rose, who married James Kenny in Bayonne in 1883.  Rose provided me with more opportunities to uncover the hometown of her and her brother, but Rose's records also would not give up a location more specific than Ireland.

Enter the family stories.  My grandmother told me that she had a cousin who was a priest.  Not surprising in an Irish Catholic family.  My grandmother's cousin told me that they had a cousin who was a priest at Notre Dame.  This is more helpful, but there is no lack of Irish priests and churches called Notre Dame.  I did take note of two men named O'Donnell who served as president of Notre Dame University in Indiana.

I was at the Bayonne Library yesterday and found an obituary for Patrick O'Donnell in the Bayonne Times using his date of death.  In the obituary, his hometown in Ireland was not revealed, but I discovered two more siblings in the United States.

Patrick O'Donnell was the uncle of a priest, Charles Leo O'Donnell 1884-1934, who was a president of the University of Notre Dame.  Patrick's sister, Rose, was listed, and so was a previously unknown sister- Mrs Kathryn Mason Kennedy of Stockton, California.  A nephew with the last name O'Donnell indicates that Patrick had a brother for me to find and that I should start at Notre Dame University.

Having a priest in your family is great for genealogy.  Reverend Charles is especially wonderful because he was a president of a well-known university and he was a published author of poems.  People have researched Charles and cite his parents as Cornelius (or Neil) O'Donnell and Mary Gallagher.  This O'Donnell branch lived in Indiana, which is why I never found them in New Jersey.  The burial places of Neil and Mary and their children are on FindAGrave with references to hometowns in Ireland:  Ardara for Neil O'Donnell and Killybegs for Mary Gallagher, which are in County Donegal.  In his poem, "A Road of Ireland," Charles wrote:

"When she came up from Killybegs and he from Ardara
My father met my mother on the road, in Donegal."

It looks as if Charles' father, Cornelius/Neil O'Donnell was a brother to my ancestor, Patrick O'Donnell; and their sisters were Rose and Kathryn.  From the records I have compiled for Patrick and Rose, the parents of these four siblings were Peter O'Donnell and Margaret Gallagher.  It is interesting that Cornelius O'Donnell may have married a Gallagher; I wonder if there was a relation.  At this point, I do not know if Peter and Margaret came to the United States. 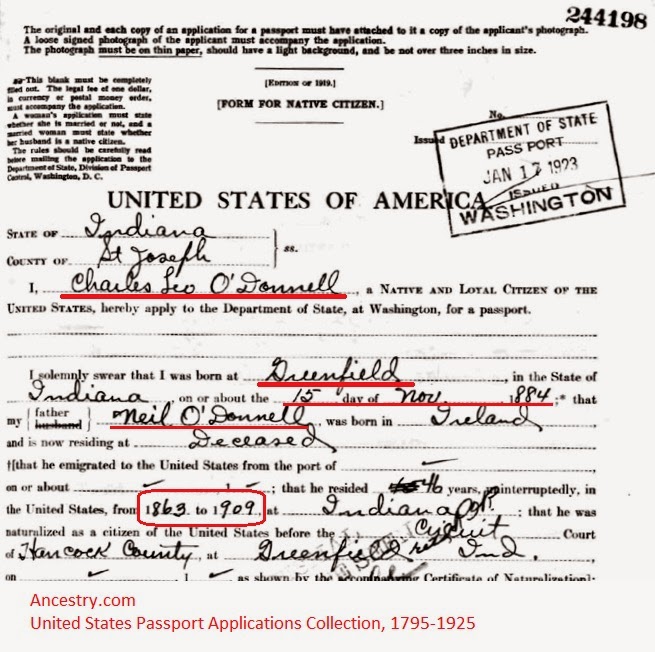 I now have specific location to look for records on my O'Donnell and Gallagher ancestors.

This story illustrates why you must follow your lines up and then across and back down through siblings and cousins.