Mary ODonnell was an aunt of my maternal grandmother. She disappeared after the 1920 census in Bayonne (19 West Seventeenth Street). Mary was born June 1, 1899 in Bayonne, Hudson County, New Jersey to Patrick Francis ODonnell and Delia Joyce.

Someone wrote to me, inquiring about a marriage between Mary ODonnell and John Murnane around 1919 or 1920. Mary ODonnell is not an unusual Irish name. I have several in my family tree. Was this Mary ODonnell any relation to any of the people with the same name in my tree?

I checked the online New Jersey Marriage Index and found a possible match for 1920. This is an index by bride only and provides the husband's initials, not full name, for the years 1920-1929. The marriage records are housed in the Archives in Trenton and are organized by year by groom's surname. 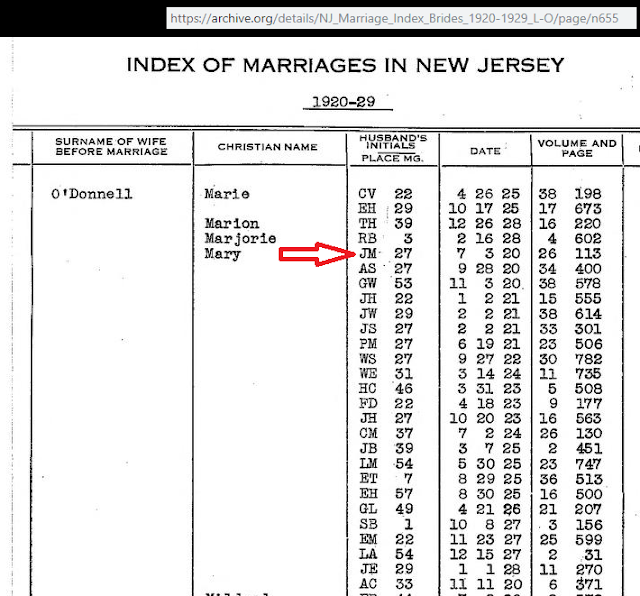 The marriage certificate in Trenton showed that the entry in the index was indeed for the marriage of John Murnane and Mary ODonnell on July 3, 1920 at Saint Mary's Catholic Church in Bayonne. This Mary is my grandmother's missing aunt, shown by the names of her parents on the record. 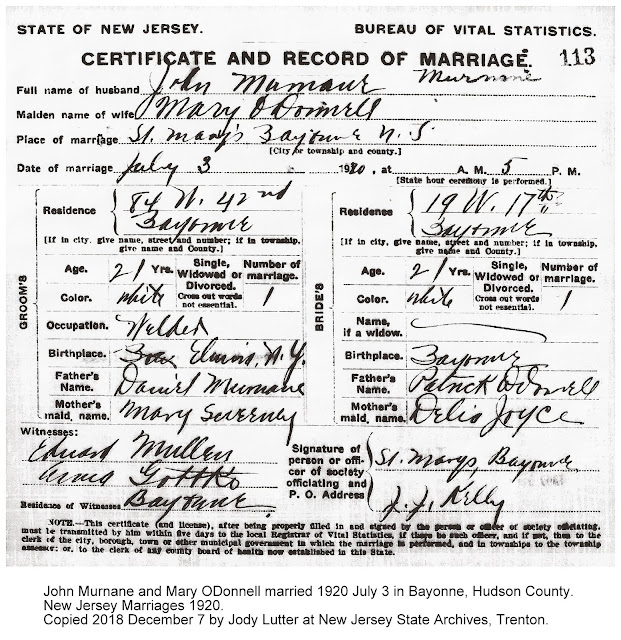 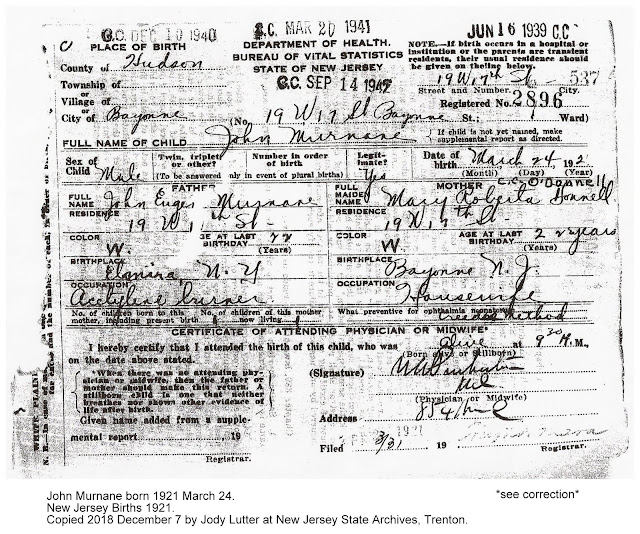 Tragedy struck on July 30, 1925 when Mary gave birth to a baby girl prematurely. Both mother and baby died. (This day was also my grandmother's fifth birthday.) They were buried in Holy Cross Cemetery in North Arlington, Bergen County, New Jersey. (Mary's parents are interred at Holy Name Cemetery in Jersey City.) 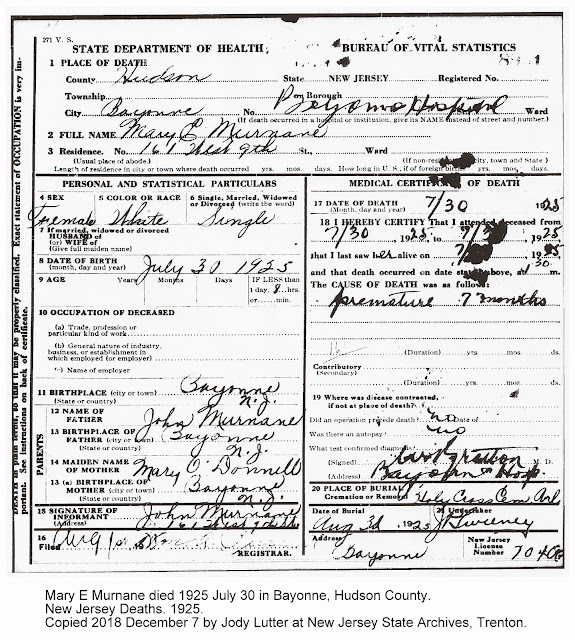 You can view all people in a plot at Holy Cross. Also buried with mother and daughter is Daniel J Murnane in 1964. I do not know who this is.

A hint for finding Mary, besides the inquiring person, was in the wedding announcement of Margaret ODonnell to William Joseph Coughlin in August of 1920. Margaret was a sister of Mary. "Miss ODonnell was attended by her sister, Mrs J Murnane, as maid of honor." 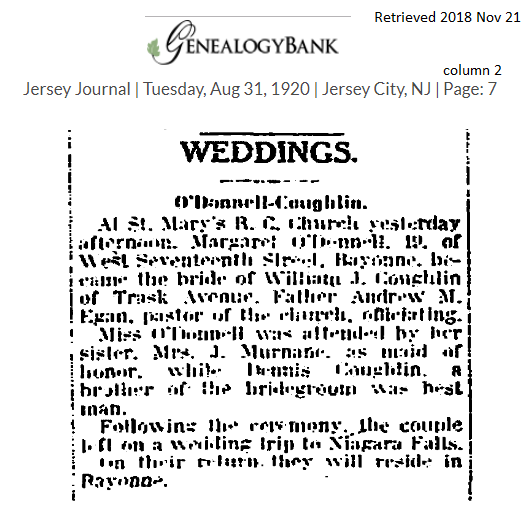 We welcome more cousins to the ODonnell branch.

I am looking for George D Russell.

The only information I started with was his Army Serial Number from World War II, 32960000, and last known address in the Forest Hills section of Queens, New York at 100-35 72nd Road.

The Army Serial Number was correct (see images from Fold3 below). I wrote to the National Archives for the service record. If I could find a birth date for George, I could filter out the rest of the men with this same name.

The response was that the fire of 1973 destroyed most records, but I could request the final payment voucher. 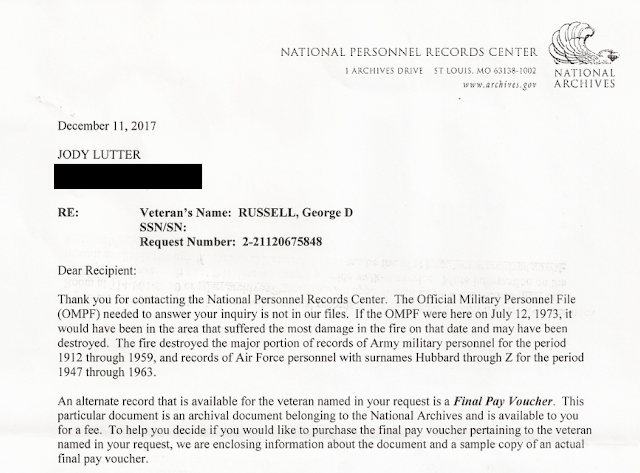 The final payment voucher verified the address in Queens. It looks like George left the Army in January of 1946 after foreign service. His signature is at the bottom of the page, which could prove useful if I find another document. 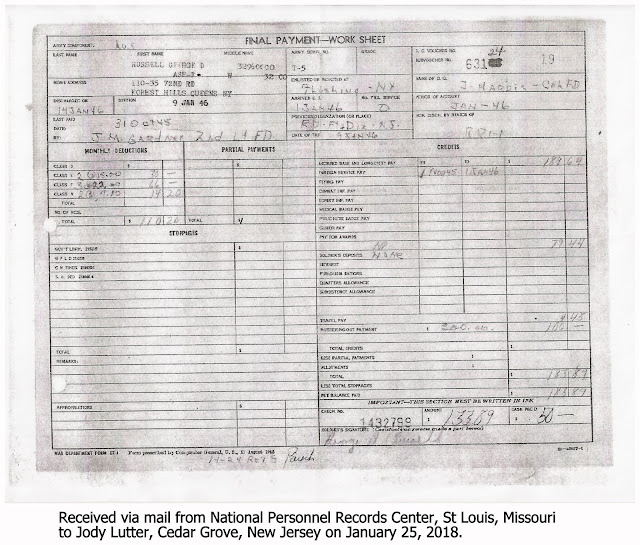 The record from Ancesty.com has George as single. 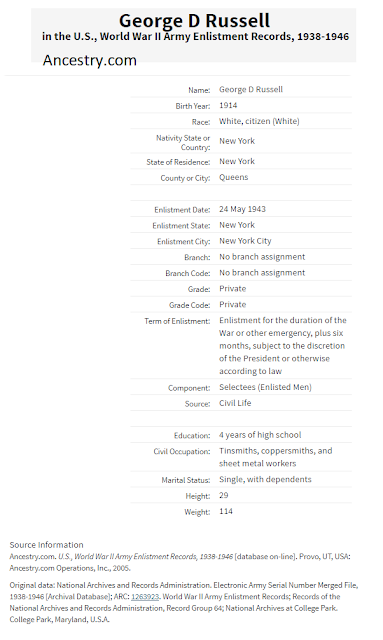 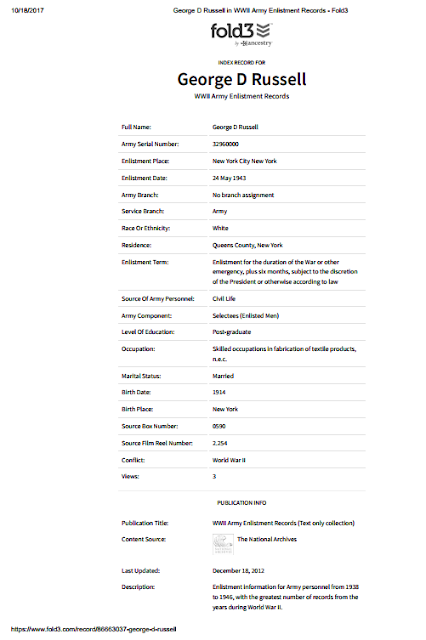 I searched ship records for George Russell leaving the United States and returning in October 1945 through January 1946. No luck.

I created a family tree of all the men named George Russell living or born in New York in the target time frames. I would not know if I have included the correct person.

The Beneficiary Identification Records Locator Subsystem (BIRLS) is available at Ancestry.com. I do not see a compatible entry. (These records are also a target for release to the public for free through Reclaim the Records.) 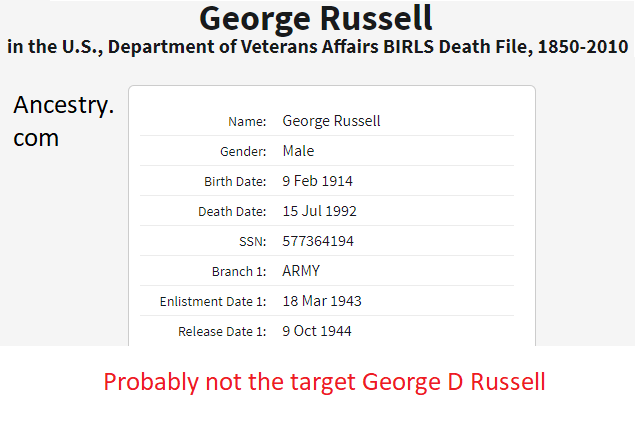 I searched newspapers for the address. I did not find George Russell associated with the Queens address in newspapers. I found other people at this address.


If anyone has any leads on George D Russell, I would appreciate hearing from you. Thank you.

Posted by Jody Lutter at 5:56 PM No comments: