I suspected that these two may have divorced because Laura was recorded as "divorced" in her 1930 and 1940 census entries.  Howard was listed with another wife, Fiorita, in 1930 and 1940; as well as his death certificate and burial place.  I have not yet found a second marriage record for Howard.

Through the New Jersey State Archives, I previously obtained divorce records for Howard's parents, Hermann Lutter and Clara Uhl, dated 1895.  The information was scant- only Hermann's account of his wife abandoning him and refusing to return.

Thirty years later, Howard's divorce records contain so much more to work with.  (I posted the entire record in DropBox, if you would like to read them.)  Divorces from this time period are not kept by the New Jersey State Archives, but rather by the New Jersey Superior Court Records Management Center in Trenton.  There is no online service for these records.

The records include depositions from Howard and his witnesses, but nothing from Laura.  The general tone is that Laura did not clean the house, take care of the children, or cook meals, instead preferring to socialize or work full-time outside of the home.  The papers are worth reading as first-hand accounts of the role that women were expected to fulfill during this time.  Howard needed to establish that he was not living as a family unit with his wife, Laura, and that she had abandoned him, their children, and her housekeeping duties.

According to Howard, Laura's defense was that she did not like housework and wanted to hire a maid to take care of the house and children. 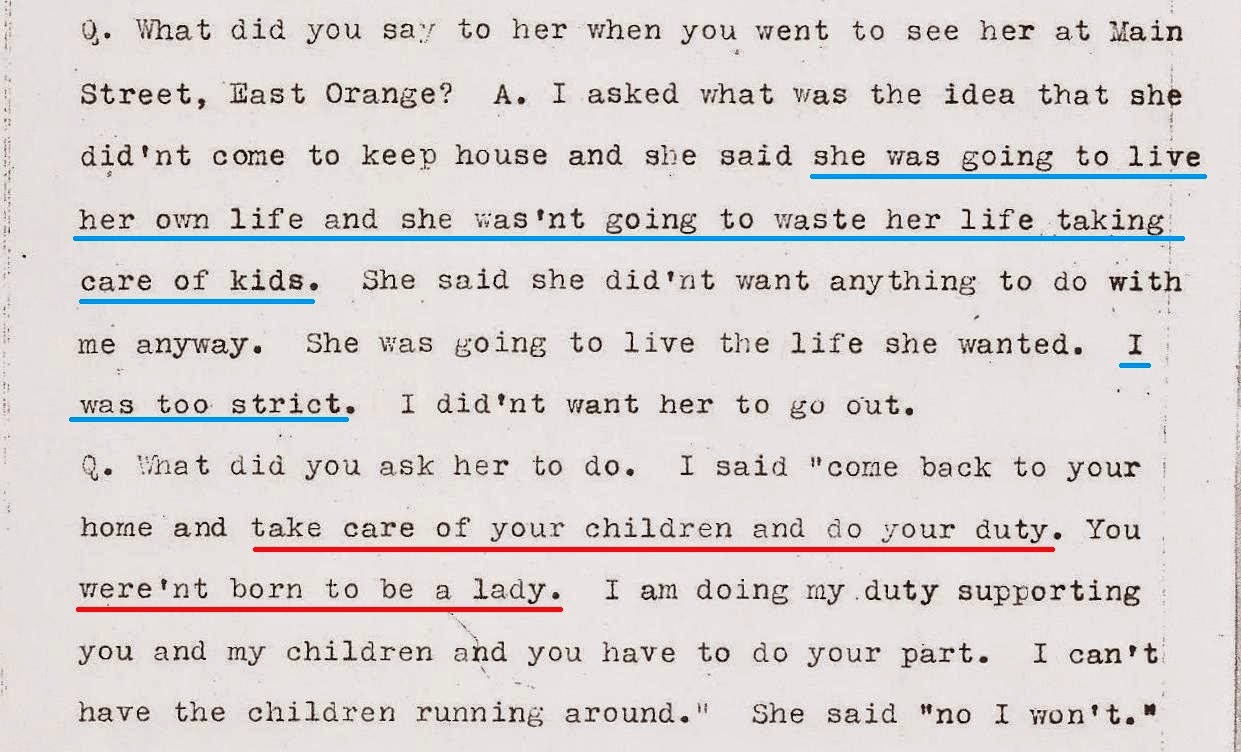 The movements of the family were specified, providing more locations to search for records.  They lived not only in Newark, New Jersey, but in New York City and Philadelphia.  Their son, Clifford (my paternal grandfather), was born in 1915 in Philadelphia.  In the divorce records, this is explained:  Howard was working at the Adelphia at that time. 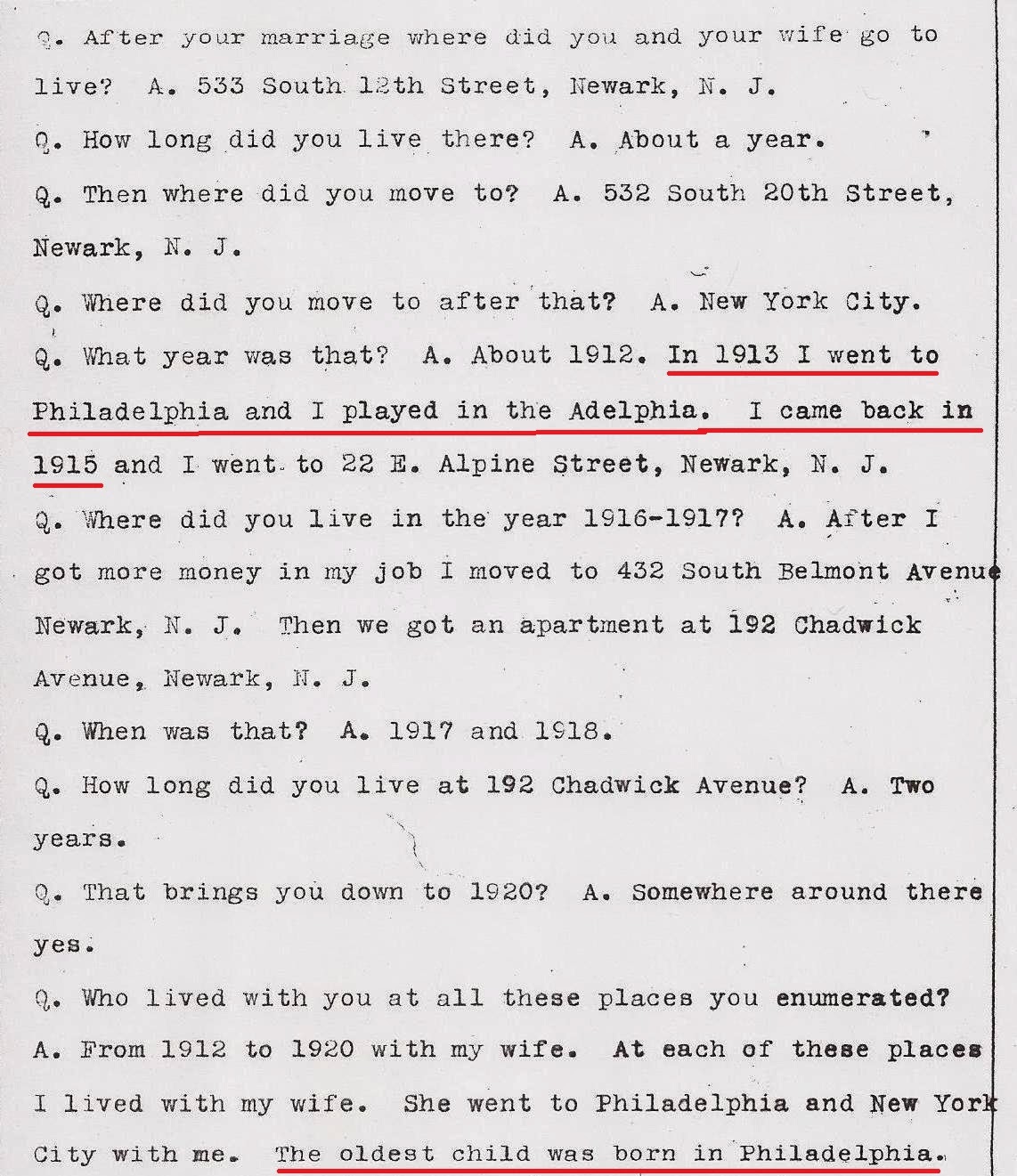 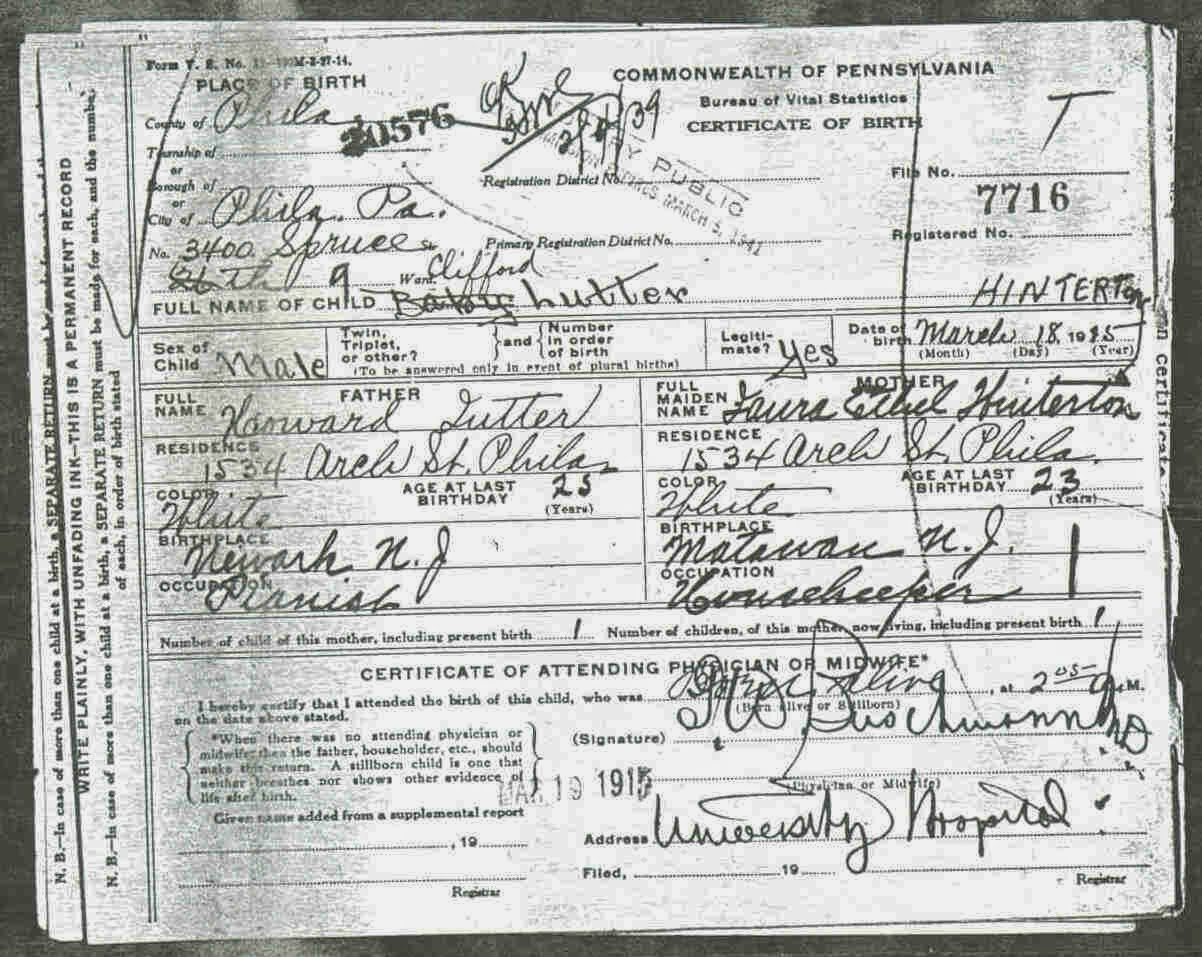 Howard's mother, Clara Uhl, offered her recall of events, mentioning a time when Laura was in the hospital with the flu, and the children, Clifford and Beryl, got measles.  This is a nice little family story embedded in the divorce record.  Clara mentioned her sister, Lillie Uhl, as well as Laura's brother, William Winterton. 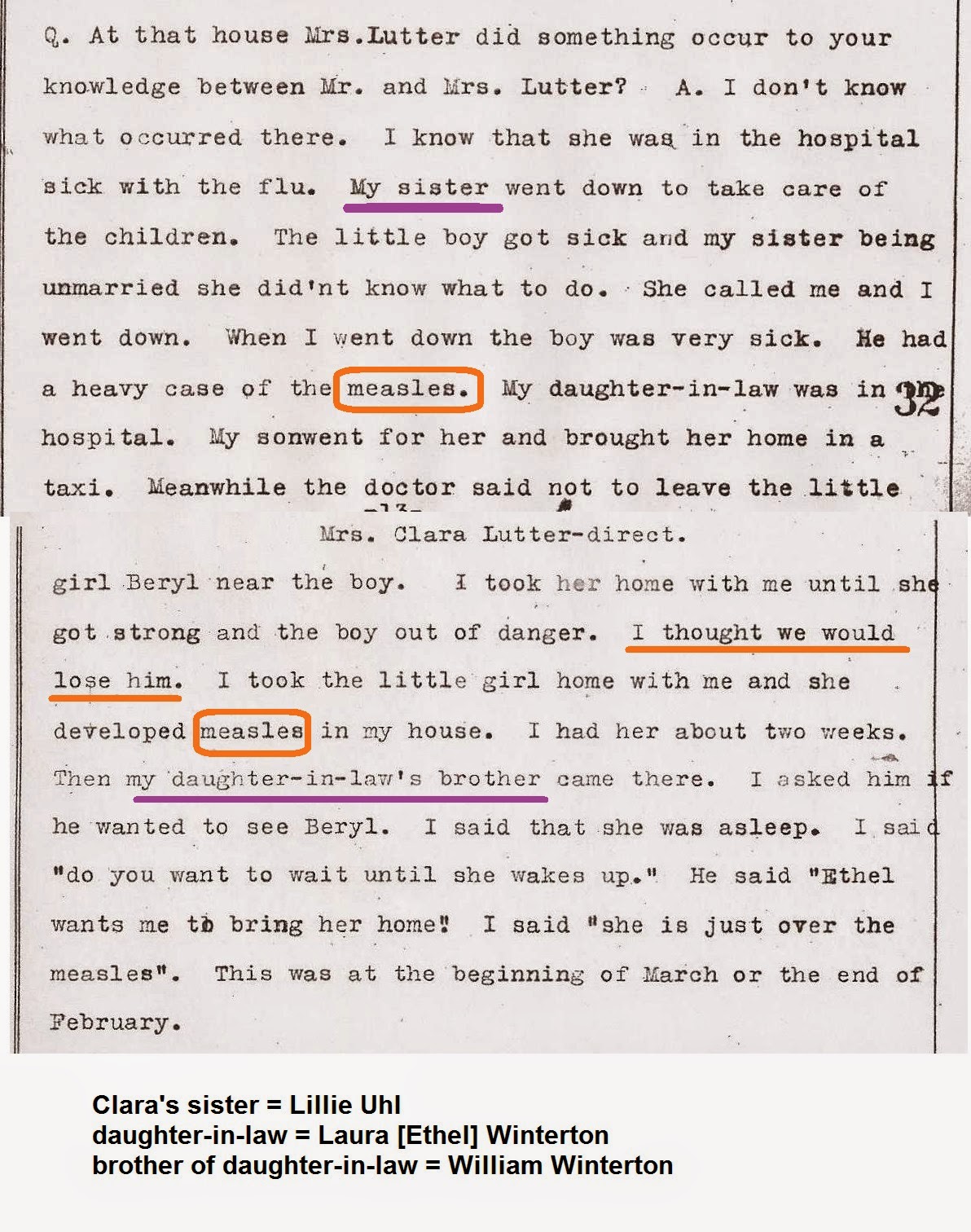 These records gave me an important piece of information that I did not know.  Howard's address in the 1930 census in Bloomfield, New Jersey was 171 Ampere Parkway.  This was a new street name and numbering system; the house was 453 North Eighteenth Street in the 1920 census.  This is a connection to the Winnie family that I had missed.  Mrs Fiorita Winnie (nee Lorenze) became Howard's next wife. 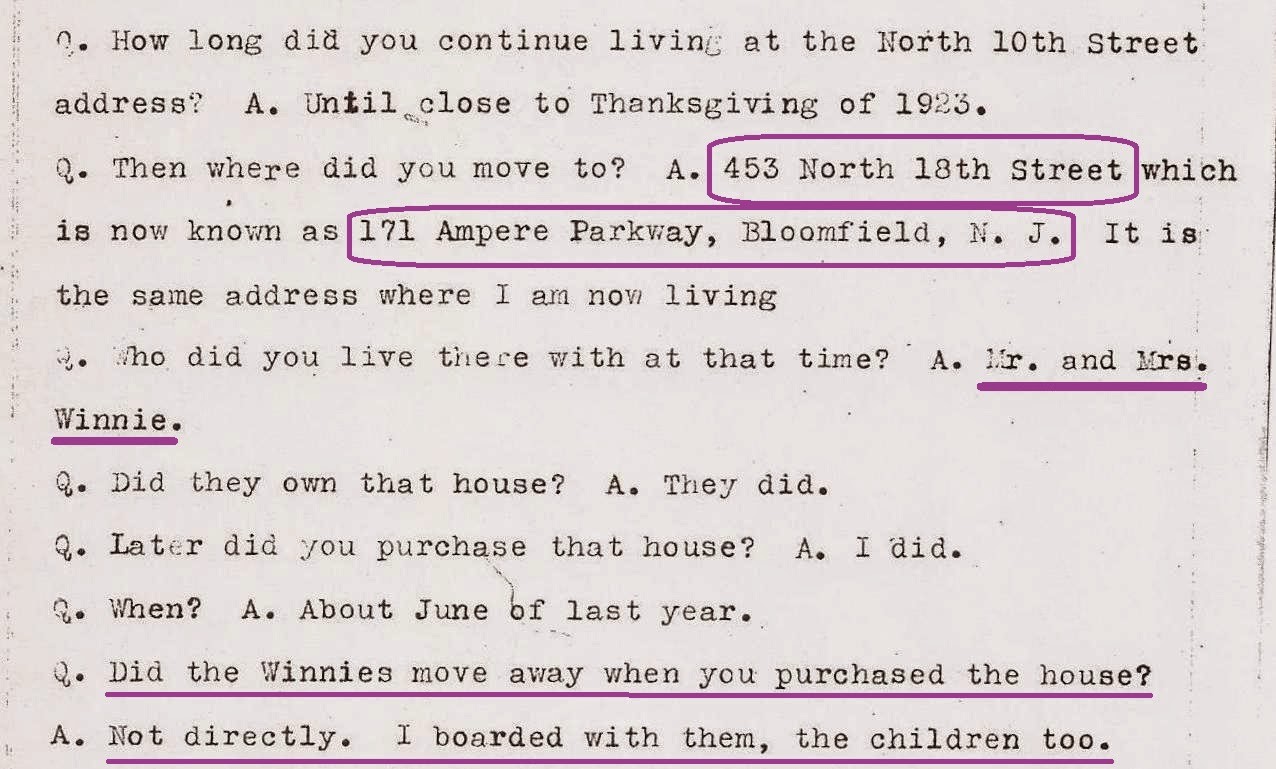 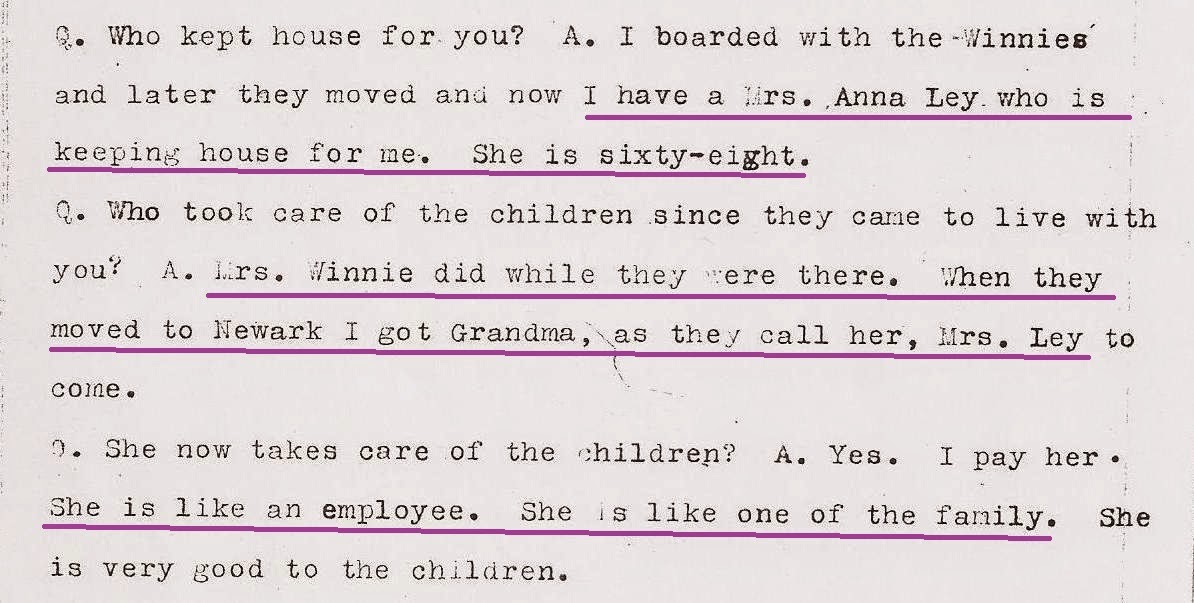 Who was living in this house in 1920?  The Winnie family: James, Fiorita, and their two daughters. 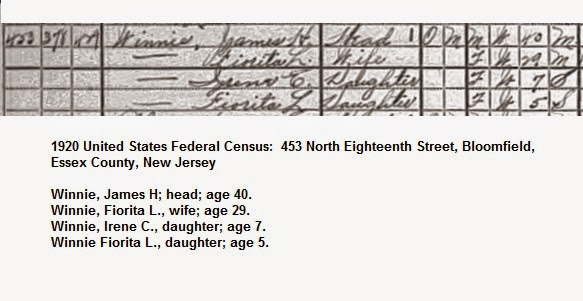 In 1930, Fiorita's husband, James H. Winnie, was also living with a new wife, Laura, and a stepson, Clifford C. Yunker.  I need to look for a divorce record for James Winnie and Fiorita.

I do not know when the relationship started between Howard Lutter and Fiorita Lorenze/Winnie.  As a landlord and acquaintance of both Howard and Laura, Mrs. Fiorita Winnie testified about Laura's lack of housekeeping and child care. 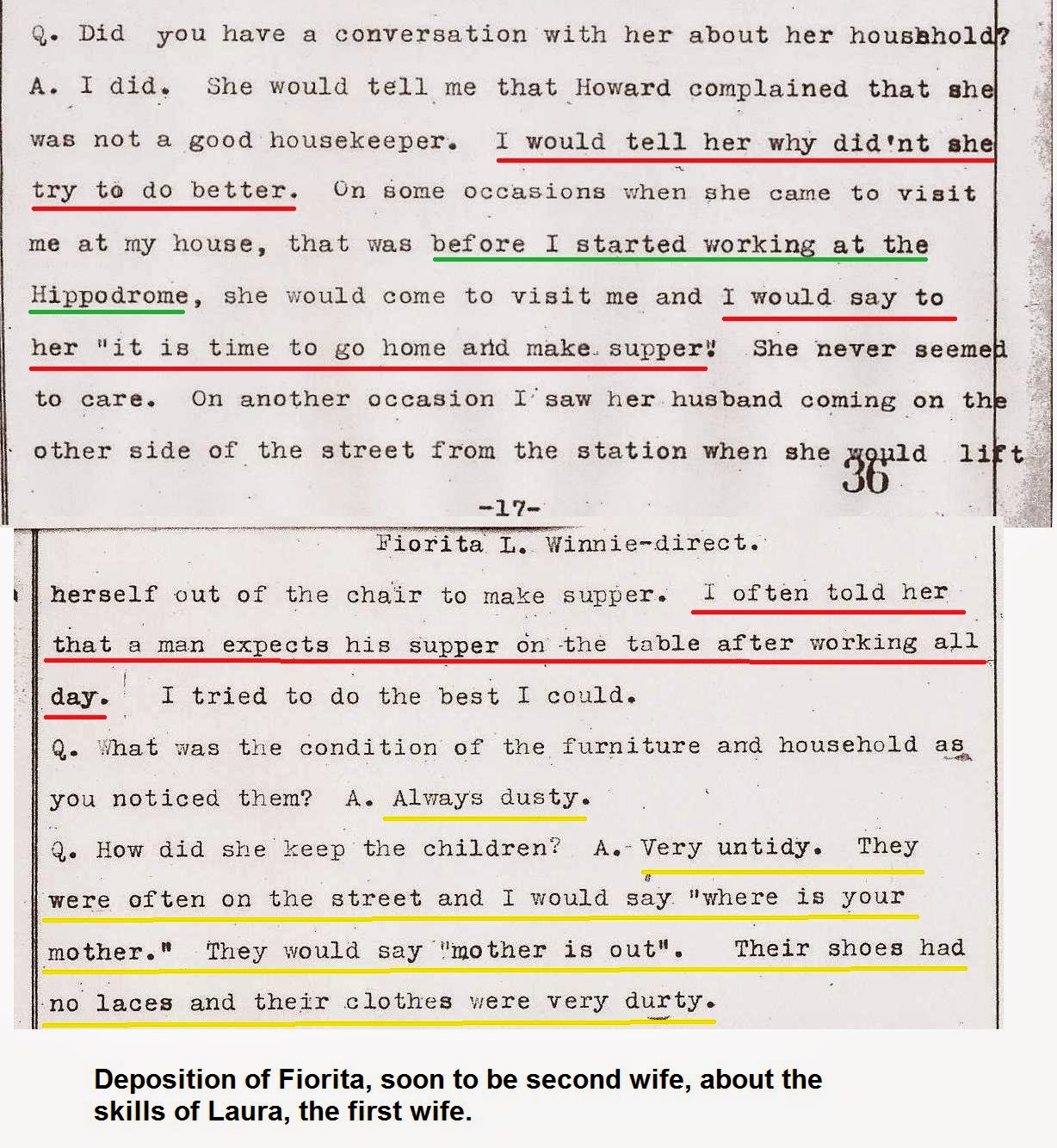 In the Ampere Parkway house, the housekeeper/provider of childcare to the Lutter children was Mrs. Anna Ley.  "Like one of the family," described by Howard.  "A distant relative," according to Fiorita.  (I do not know how they are related.  Anna Ley was born around 1857 in Ohio to Jacob Bauer and Stephany Metzer, but lived most of her life in New Jersey.)

Mrs Ley also testified.  Note that Fiorita worked outside the home and this is why Mrs Ley cared for Fiorita's home and children.  (Yet Laura was denied a maid or child care so that she could work outside the home.)  Fiorita was a performer and worked at places such as the Hippodrome in New York City.  "She does the wire act on a bicycle."  This is one of the more unusual occupations. 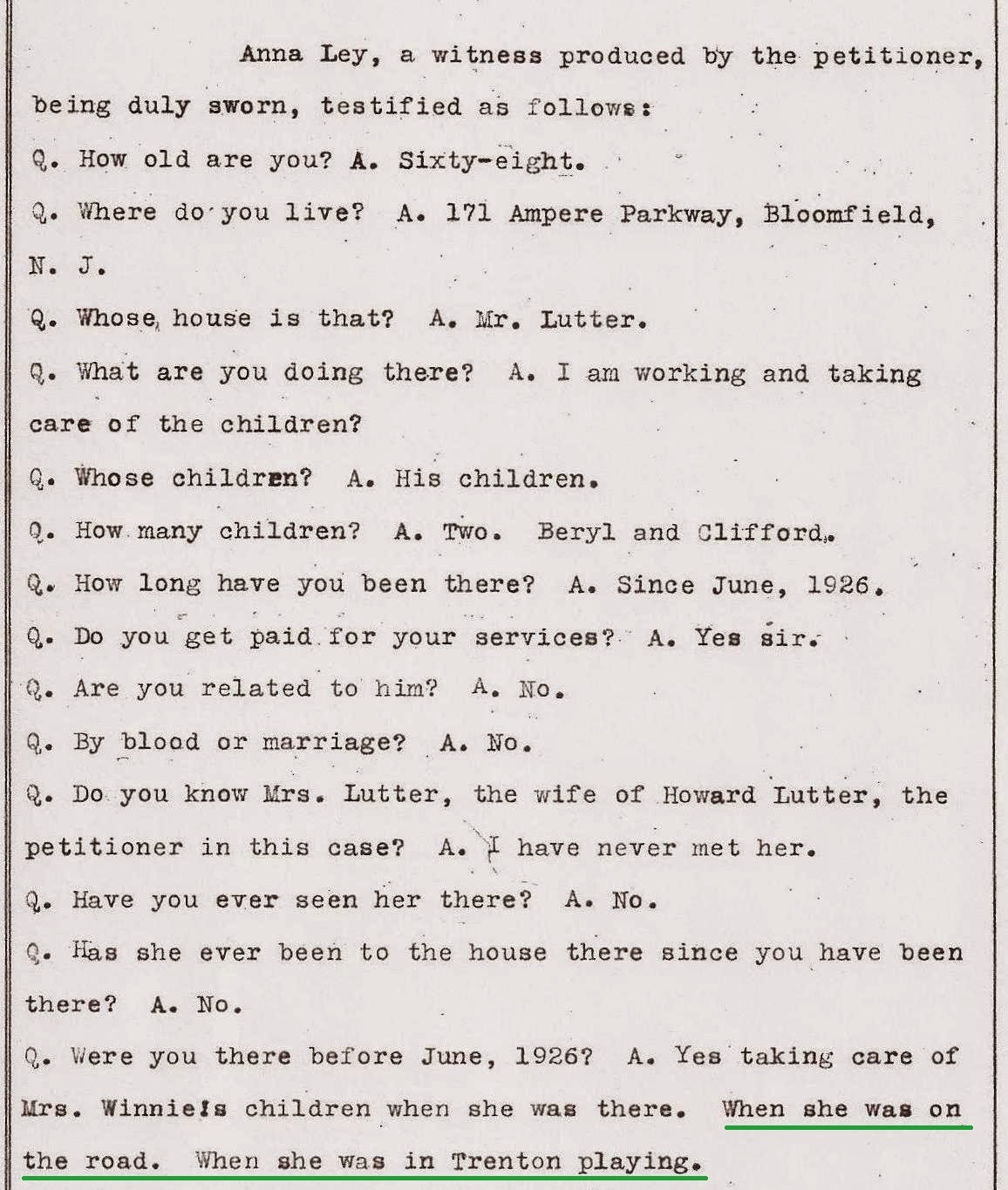 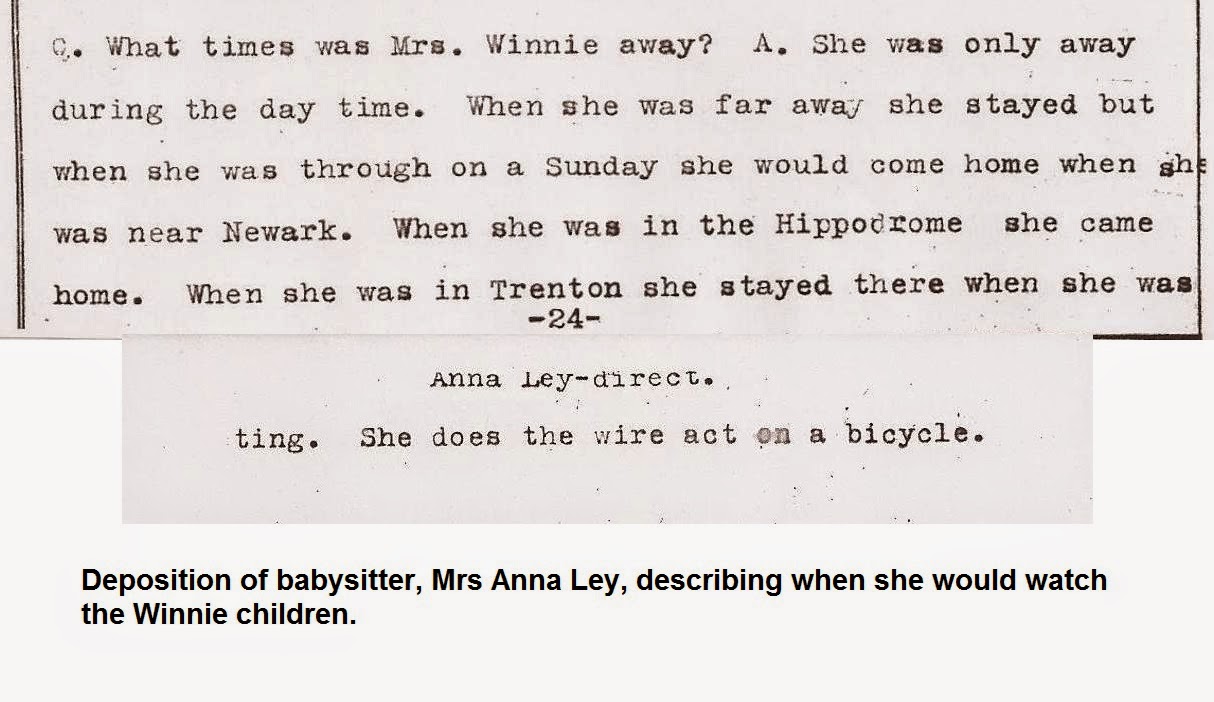 Laura's landlord, Mrs. Catherine Wormold, testified that Laura lived with her as a boarder, and not with Howard, her husband, and children.  Mrs. Wormold showed us a different side of Laura, describing her as "a beautiful character."  She also mentioned a physical disability:  "Mrs. Lutter walks decidedly lame and I was very much afraid that in a few years from now she would not be able to earn a living."  She was concerned that the divorce would preclude Laura from receiving financial support when disabled.  On her death certificate, Laura's cause of death was multiple sclerosis and diabetes.  She was showing symptoms at the time of the divorce.  We can wonder how much this affected her ability to clean the house and care for the children.