The day after I wrote about an AncestryDNA Circle for the wrong ancestor, Mary Evenshirer, another descendant of hers appeared in my matches.


This person will not appear in the DNA Circle because her family tree does not extend back to this couple.  (Unless she adds them to her family tree.)

Finally I am placed in an Ancestry.com DNA Circle. 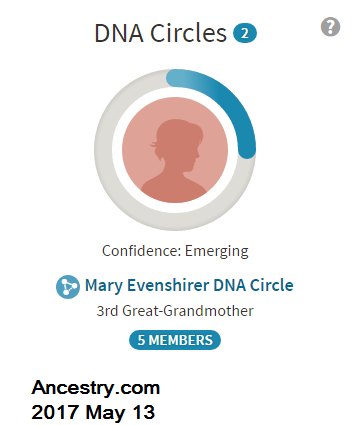 The common ancestor surprised me:  Mary Evenshirer.  Nobody else has this surname, except maybe Mary's father, John Evenshirer, who likely died in New York City in the 1840s.


Ancestry offered this explanation of a DNA Circle.  I crossed out the part where the evidence went astray:  Mary Evenshirer had no children with Alfred Eyre. 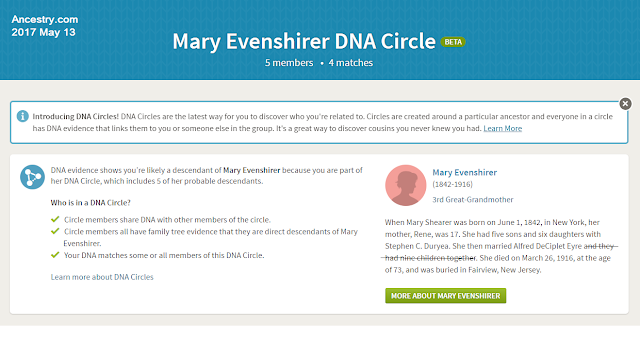 From there, more chances for a mis-step.  Mary Evenshirer married Stephen C Duryea (1814-1887), a brother of George Duryea, and 28 years her senior.  He was a step-uncle, if such a relation exists.

Previously a cousin was found via DNA testing on Ancesty.  She is in the DNA Circle.

Another cousin was also located via AncestryDNA.  He descends from Stephen and Mary's daughter, Jeanette Lent Duryea (1868-1939), who married Charles Hughes Quackenbush (1862-1947).  The family tree of this cousin is only three generations, with no mention of any of the surnames I discuss here; predictably, he was missed from this Ancestry DNA Circle.

The DNA Circle formed because a  cluster of three people surfaced at Ancestry with Mary Eyre or Mary Duryea in their trees.  Their trees did not extend back into the Brewer and Duryea lines, hence no shaky leaf designation that we share a common ancestor.  But somehow the threshold was met for a DNA Circle. 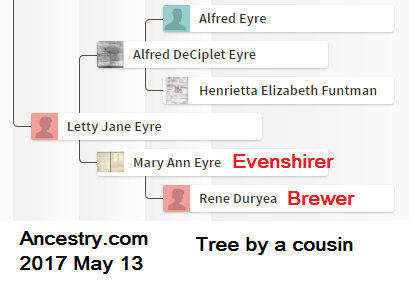 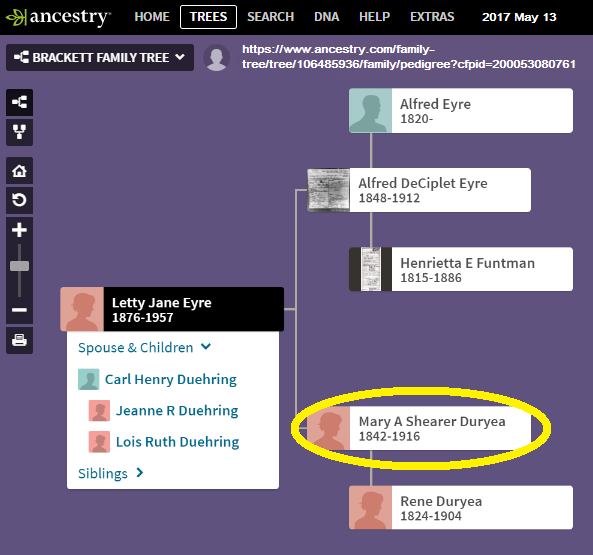 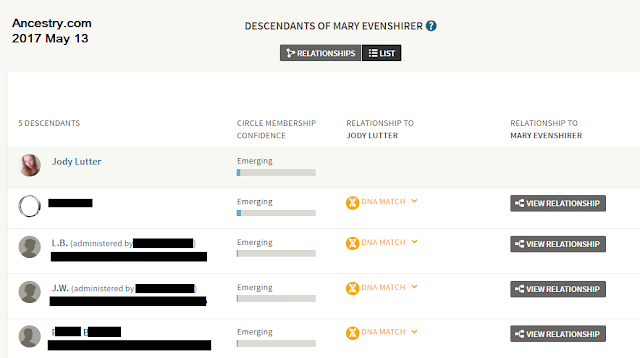 The common ancestor with this group of three people would not be Mary Evenshirer.  They descend from Mary's half-sister, Letty Jane Duryea, wife of Alfred DeCiplet Eyre.  The common ancestors would be Mary and Letty's mother, Rene Brewer AND from the other line, Garrett S Duryea (1777-1834) and Ann Cornell (1789-1871), the parents of Stephen C Duryea and George W Duryea. 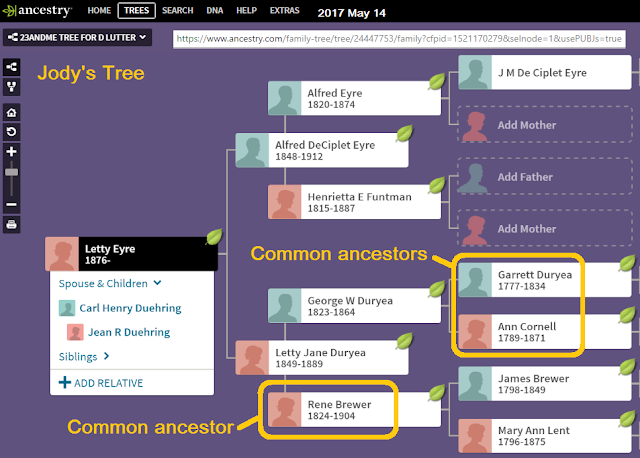 Ancestry picked up on a common relation among the five of us, but chose the wrong common ancestor.  The actual family tree is tricky, as I outlined above.  Ancestry DNA Circles does not replace researching the family tree.