I subscribed to another fee-based site, Fold3.  I paid $39.95 for one year as a special deal for subscribers to Ancestry.com..  The site has lots of American military records and I have several Colonial lines, so I decided to give it a try.  I started with a safe search:  locate a pension file for Elizabeth Duryea, wife of Joseph Henley, widowed during the Civil War.  I found the record quickly- 33 pages of names, dates, and places!!!


The tidbit of information that I was not expecting was that Joseph B. Henley was not this man's original name.  He was Joseph H. Jones when the couple married in New York City in 1854.  This explains why I had not uncovered a marriage record and could not locate Joseph Henley in the 1850 census.  The record was silent as to the reason for the name change.


Elizabeth's application for a widow's pension was approved.  She received $8 per month plus $2 per minor child.  She collected for 38 years.
Posted by Jody Lutter at 4:01 AM No comments:

In researching the Bishops of Burlington County, New Jersey, I came across a marriage for William R Bishop in 1860 to Mary Lee at the State's online index.

I wondered if this was the same marriage, recorded three times, or an error in the index, or something else.  I obtained the original ledger entries from Trenton.  (If you are unable to visit Trenton, you can write to the Archives or order the microfilm through your local FamilySearch Center.)

I located the three recordings and it does indeed appear that this was the same marriage recorded in three separate locations in Burlington County.  I do not know why the marriage was recorded thrice.  Names of parents are provided in two of the recordings, giving possible leads on people born in the early 1800s- from a record made in 1860.  (The year in the index is correct, as this index is not the same index available through FamilySearch or Ancestry.) 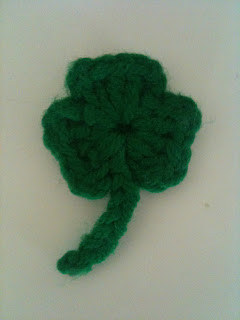 Posted by Jody Lutter at 3:16 AM No comments:

The Italian Genealogical Group is sponsering another indexing project.  Volunteers are creating a name index for naturalization petitions filed in the United States District Court in Newark, New Jersey.  The district includes not just Essex County, but also Bergen, Hudson, Morris, Passaic, Union, Sussex, and parts of Middlesex.  The years of the petitions range from the 1920s through the 1980s.  I am indexing about 1000 cards of last names that start with M.

Posted by Jody Lutter at 7:11 PM No comments:

I copied some birth certificates at the New Jersey State Archives in Trenton last week.  Indexes for births, marriages, and deaths are available through FamilySearch and Ancestry.  I compared actual birth certificates to their corresponding entries in these indexes to confirm that the year may be off by one, just as in the indexes for marriages and deaths.

Here is a page from the index for births in New Jersey from July 1, 1890 through December 31, 1900 available through the Archives.  The baby's name, or "male" or "female" if unnamed, is listed first, and the father's initial is listed next.  The dates have been accurate for all certificates that I have viewed.  Using the birth of Robert Bosset, for example, we can see in the index that his father's first name begins with R, the date of birth was January 10, 1898, and that the certificate was filed in Newark, which is place number 36. 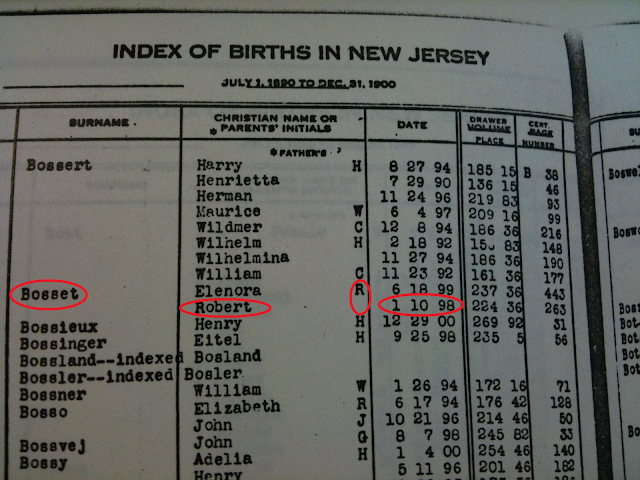 The birth certificate for Robert Bosset matches the information in the index and also provides the full names of both parents.  You also get to see the address of the birth (likely the family's home), as well as his birth order and how many children are still living.  This is very helpful information and why you should always seek out the original record. 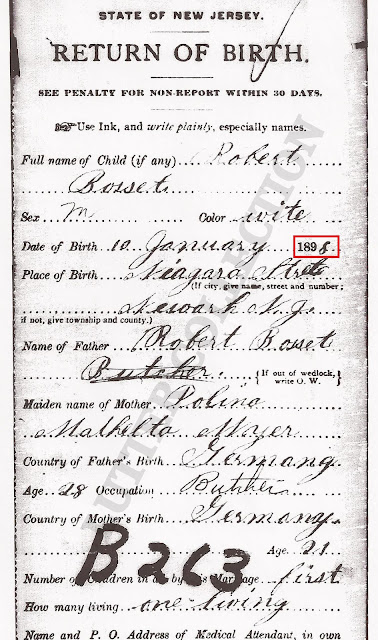 FamilySearch and Ancestry have a record of this birth in their indexes.  Their indexes provide additional information not contained in the older indexes from the Archives, such as full names of parents and their ages.  BUT:  the year can be off by one.  The year of Robert's birth is incorrectly listed as 1897, not 1898.  This is because the volume held births from July of 1897 through June of 1898.  It is unfortunate that while creating these indexes, greater care was not taken to record the year of birth.  The indexer needed to have viewed the actual certificate to generate the parents' names and ages for the index and, in hindsight, should have also entered the year of the event.


Remember that the names on the birth certificate are handwritten and had to be deciphered by the indexer.  The example birth certificate here is actually a very good copy and the handwriting is not too bad.  The mother's name is fully written on the birth certificate, but only the middle initial is used for the index.  Her last name begins with an M in other records, but you can see how the indexer read W.  This is another reason why you need to view the actual record yourself to compare the information to other records.
Posted by Jody Lutter at 3:37 PM No comments:

Tonight I attended a presentation by Dennis Piccirillo about online newspaper sites.  The lecture was held at the Morris County Library through the Morris Area Genealogical Society.

My current research is primarily based in New Jersey and New York.  I have had good success with GenealogyBank, which is a pay site, though many major New Jersey and New York papers are not in its collection.  Old Fulton Post Cards is another great site for New York newspapers and is free.  I have had better success with Fulton ever since I thoroughly read and practiced the site's instructions for searching.

Newspapers can supply you not only with facts and life events of your ancestors, but also tell you stories behind the events.  Official records were not routinely kept for all of our ancestors' milestones; those that were kept may have been destroyed, lost, or simply not available.  Newspapers help bridge these gaps as you jump from birth to marriage and then death.

Mr. Piccirillo recommended initially subscribing to a pay site for only a month instead of a year because the site may send you incentives or coupons for extending your subscription.
Posted by Jody Lutter at 11:45 PM No comments:

Email ThisBlogThis!Share to TwitterShare to FacebookShare to Pinterest
Labels: newspaper

Last week I visited a few cemeteries in Morris County with Dave Peck.  He has documented many cemeteries in the area and was kind enough to show me the final resting places of some of my ancestors.

We visited the Cook Family Cemetery, which is now located on the golf course of the Rockaway River Country Club in Denville, Morris County, New Jersey.  The cemetery was not always part of a golf course.  The burial grounds were part of the Methodist Episcopal Church of Rockaway Valley, on land donated by John P. Cook.  The church relocated but the cemetery continued burials until around 1907.  The main surnames on the stones are Peer, Spear, Husk, and Cook.


We next visited two cemeteries on private property in Boonton/Powerville.  The land originally belonged to the Cook and Scott families.  A small portion was set aside for burial grounds.  The Cook stones are worn and there is no fencing. 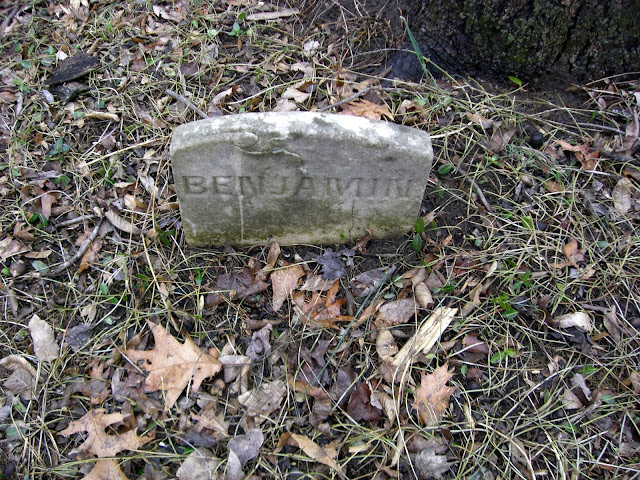 Thank you to Dave Peck for an informative tour!
Posted by Jody Lutter at 10:11 PM No comments:

Email ThisBlogThis!Share to TwitterShare to FacebookShare to Pinterest
Labels: cemetery

On Tuesday I visited the New York Public Library with the New York Genealogical and Biographical Society.  We were tutored on use of the Library's website and we toured the Lionel Pincus and Princess Firyal Map Division. 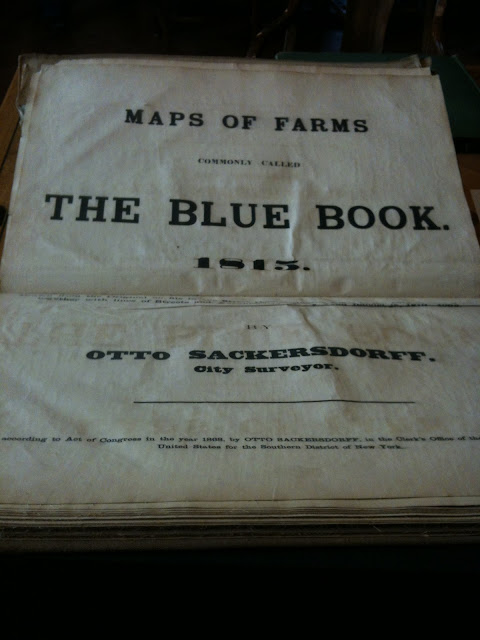 The map division a huge collection of maps, with a concentration on the New York City area.  You can view several maps online, but maps that are too large, delicate, or recent are not online.  You will want to view farm maps for the area in which your ancestors lived.  Individual properties are labeled with names of the owners, thus enabling you to locate your family of interest and their neighbors.  You can also find local churches and cemeteries that may not exist today.

You can search holdings online.  From the home page, click the "Research" tab and explore some of the options.  For a genealogy angle, search "Classic Catalog" and then do a keyword search for a surname followed by "family."  Searching for "Duryea Family" resulted in eight hits.

Duryea family miscellany is the listing for the file folder from the New York Genealogical and Biographical Society.

The Library has its own family files that can be located under the classic catalog call number search of APT-F.

If you locate a family file of interest, you need to visit the library to view the contents.  As I previously wrote, checking a family file can yield little or a lot, including pictures and research notes from long ago.