Jacob Henry Duryea was born in 1850 in New York City to George Duryea and Rene Brewer.  He died in 1928 in New Jersey.  In the 1880 census, he appeared in Jersey City with his wife, Mary E., and her mother, Sarah B. Dunham of Massachusetts, providing me with a possible maiden name for Mary.  I found three sons for this couple:  Charles W. Duryea, 1874-1876, buried at Sleepy Hollow Cemetery in Tarrytown;  Edgar H. Duryea, 1876-1926;  and John D. Duryea, 1880-1891.  Except for Charles, everyone is buried at Hoboken Cemetery in North Bergen, Hudson County, New Jersey.  I have found no evidence that Edgar H. Duryea married or had children.  The quirkiest thing about this little branch is that they are buried in the same plot as Jacob's sister's mother-in-law, Henrietta Funtman, wife of Alfred Eyre.  Then I discovered that Jacob's sister, Letty, was actually buried there in 1889, but re-interred in 1912 at Fairview Cemetery in Fairview, Bergen County, New Jersey. 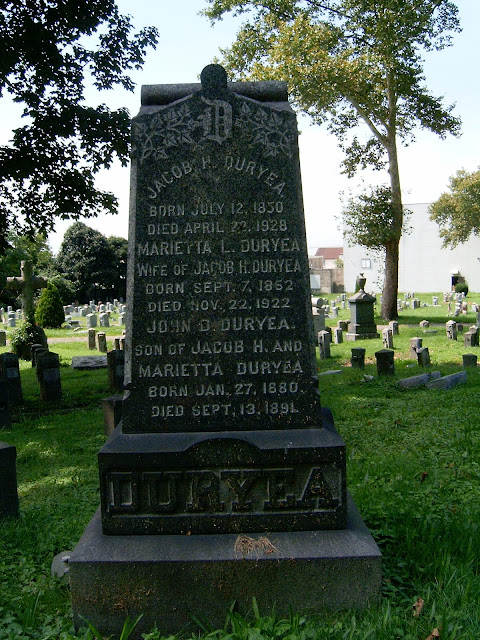 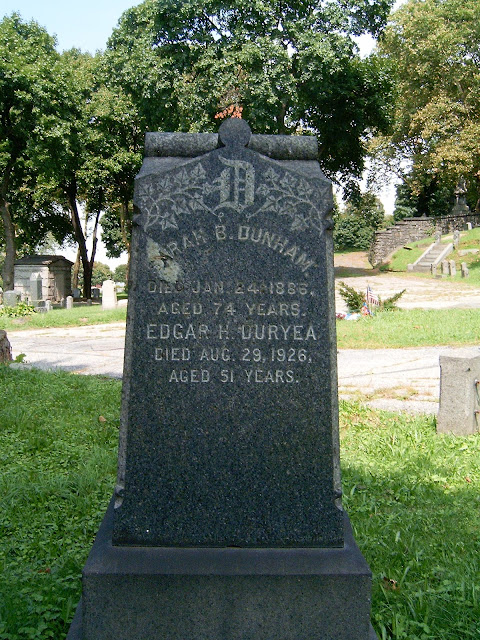 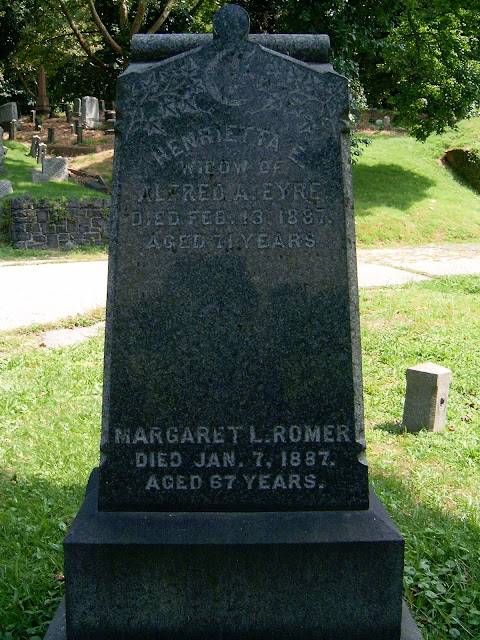 I figured that Jacob and Mary E., or M. Etta, or Marietta had married in 1874 or earlier, since their first child, Charles, was born 7 December 1874.  In the 1900 census, they are married 26 years.  When New Jersey published the marriage index online for 1848-1878, I checked for Jacob Duryea and Mary Etta Dunham's marriage circa 1874.  I found it just where I expected it to be:  1873 in Hudson County.  The problem was that there seemed to be two entries for Jacob's nuptials.

I ordered copies of the ledger books.  To my surprise, Jacob was married twice to Dunham women.  He married Harriet Dunham in Jersey City on 12 October 1873 and M. Etta Dunham on 2 March 1874.


﻿ ﻿﻿ ﻿
My little fact-checking has lead to a whole new path.  What happened to Harriet Dunham, new bride of Jacob Duryea?  Why did Jacob remarry so quickly, and to a relative of his first wife?  The Jersey Journal is online at genealogybank.com.  I found only one reference to Jacob Duryea and Miss Dunham, where they attended a "Magnolia Coterie" in March 1873.  I don't know if this was Harriet or Marietta, and what made her so highly accomplished.  More work ahead.