In the prior post, we saw the 1920 census entry for Clara Uhl, (ex)wife of Herman Lutter, listing her marital status as widowed.

This does not mean that her husband was dead!  If you do not have a death record for a "deceased" spouse, look for the person in the census anyway.  (Clara had three more years until Herman died.)

In this case, I knew that Clara Uhl and Herman Lutter divorced in the 1890s and Herman died in 1923.  In the 1920 census, Herman resided nearby with his next wife, Emma Neubauer.

Posted by Jody Lutter at 3:08 PM No comments:

Howard Lutter was listed twice in the 1920 federal census.  When this happens, we call it a Double Enumeration.  The cause of the double count for Howard was marital problems.  He was staying with his mother, Clara Uhl, but was also listed in the household of his wife, Laura Winterton, with his young children.  The hint to check for a second entry was that in his mother's household, Howard was listed as married- but no wife was with him. 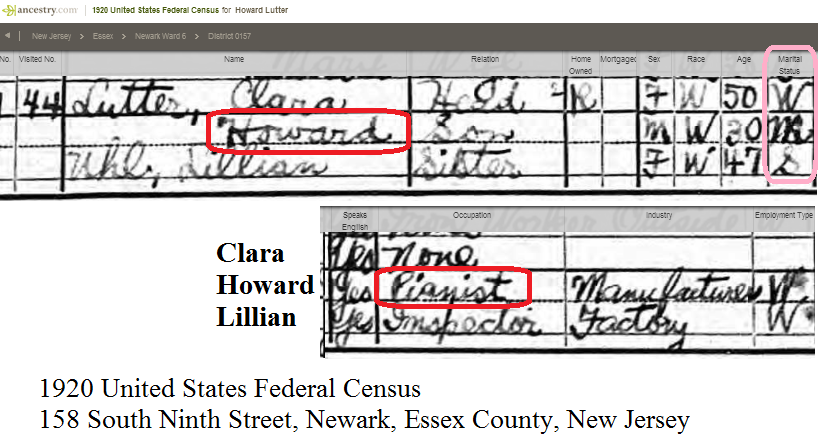 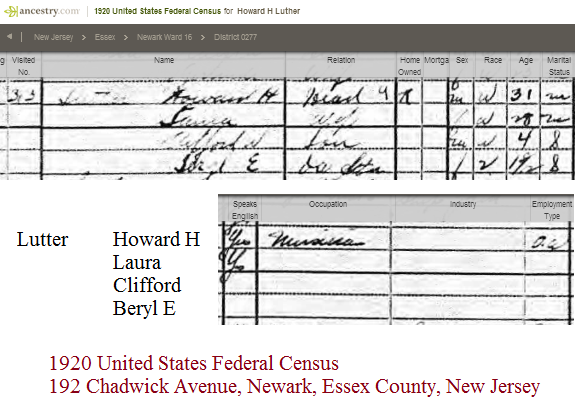 Posted by Jody Lutter at 2:25 PM No comments:

My great great grandparents, Patrick O'Donnell and Delia Joyce, were married in 1887 at St. Mary's Catholic Church in Bayonne, Hudson County, New Jersey.  While reviewing an online transcription of this church's records, I noted that Patrick and Delia were sponsors for the baptism of Mary Ellen "Otterbury," daughter of John Otterbury and Mary Campbell.  Delia Joyce's mother was Mary Campbell.  Mary was killed in 1870 by a train in Dutchess County, New York.  To date, I have been unable to connect Mary Campbell to her family of origin. 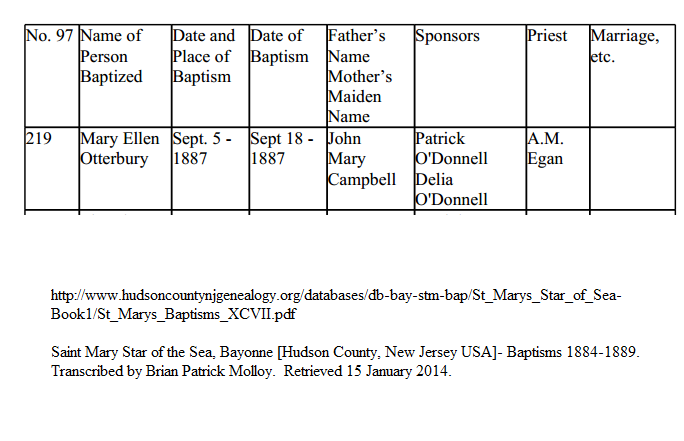 Otterbury is a name of interest to me because my mother shares DNA with R. S., who is also my father's third cousin.  R. S. has Ottenberg ancestors from Germany and then Jersey City.  By testing cousins in my mother's family, I was able to isolate R. S.'s match to the O'Donnell/Joyce branch of my mother's family tree.  An intersection between Delia Joyce, daughter of Mary Campbell, and "Otterbury" in Bayonne is a good lead to follow.

John "Ottber" was baptized at St. Mary's one year earlier in 1886, likely to allow him to marry Mary Campbell in a Catholic church.  I have not found a marriage record for this couple in New Jersey, either through a church or filed with the State. 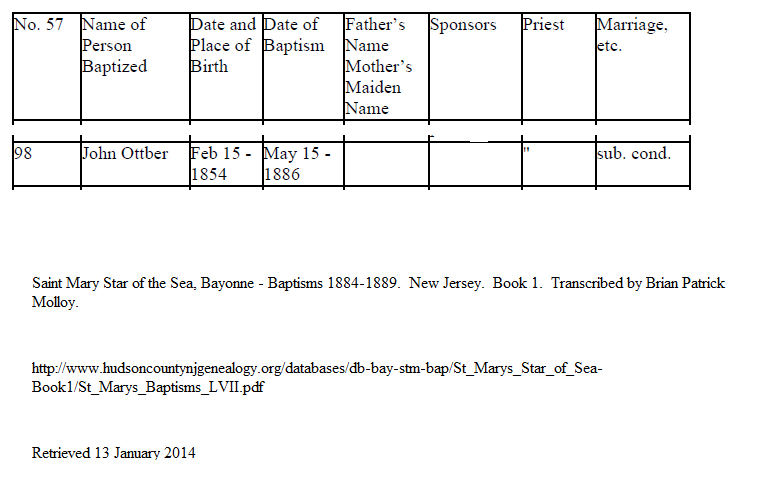 Mary Ellen Otterbury's birth in 1887 is shown in an index at Ancestry.com. 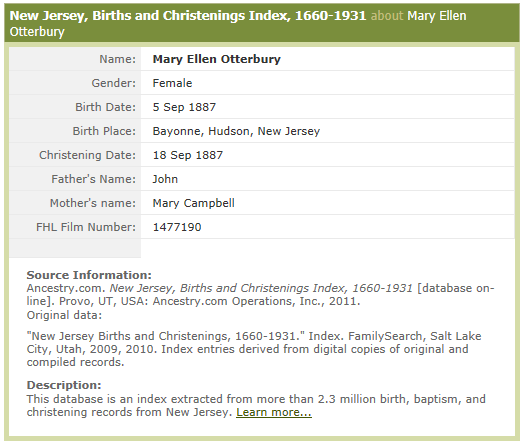 Remembering that these indexes are not records, I searched for Mary Ellen's birth certificate.  Mary Ellen Otterbury's birth does not appear in the New Jersey State index of births at Trenton.

The New Jersey Birth and Christenings index at FamilySearch.org presents a different spelling of Mary Ellen's last name- Aughtberry instead of Otterbury.

Mary Ellen Aughtberry shows up in the birth index in Trenton. 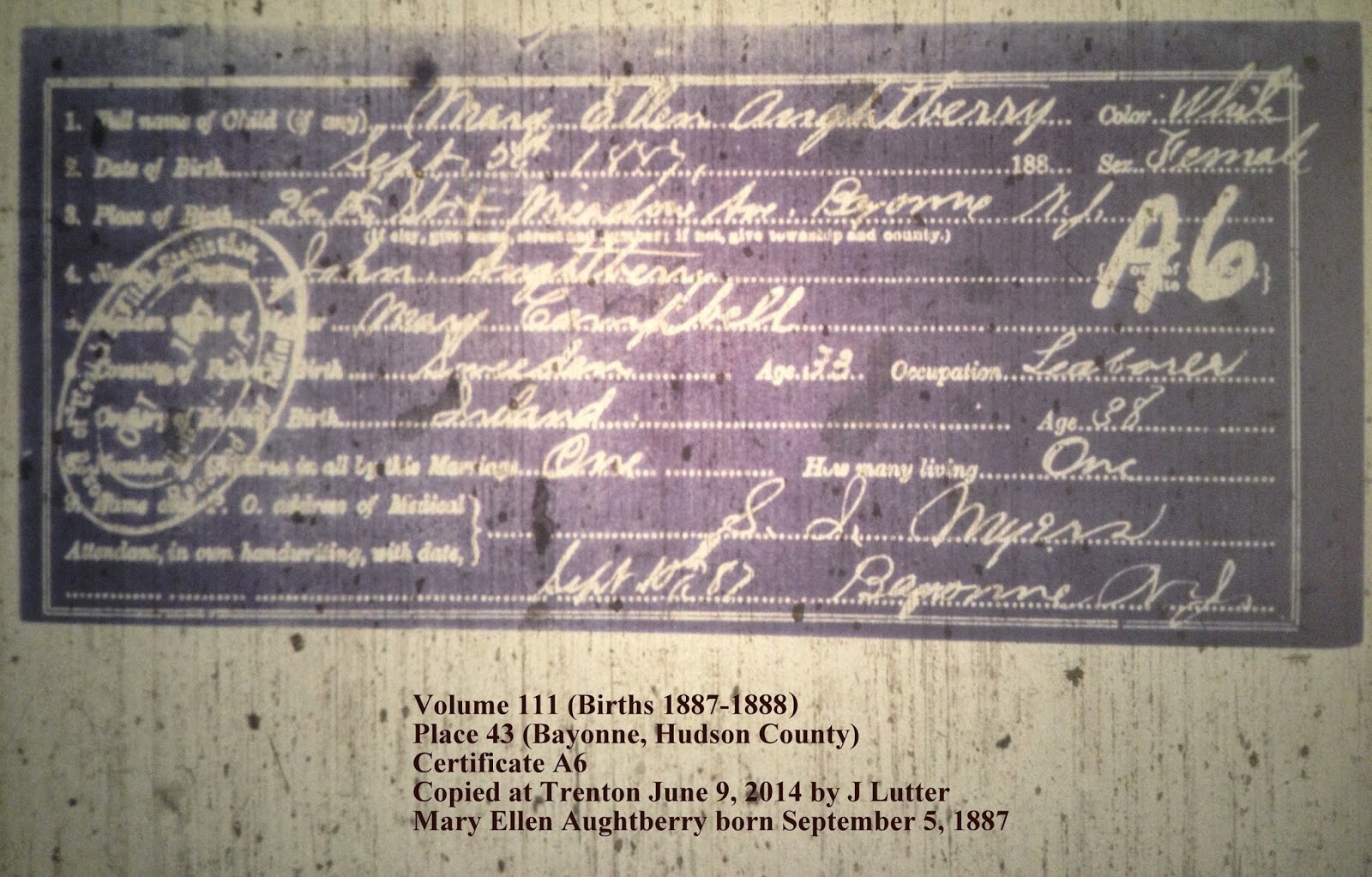 These pieces of information are pieces of a puzzle, but I need more pieces to determine:
--- Does Mary Campbell, wife of John Aughtberry or Ottbury, have a relationship to Mary Campbell, wife of Patrick Joyce and mother of Delia?
--- Does John Otterbury/Aughtberry have a relationship to the Ottenberg in cousin R. S.'s family tree? 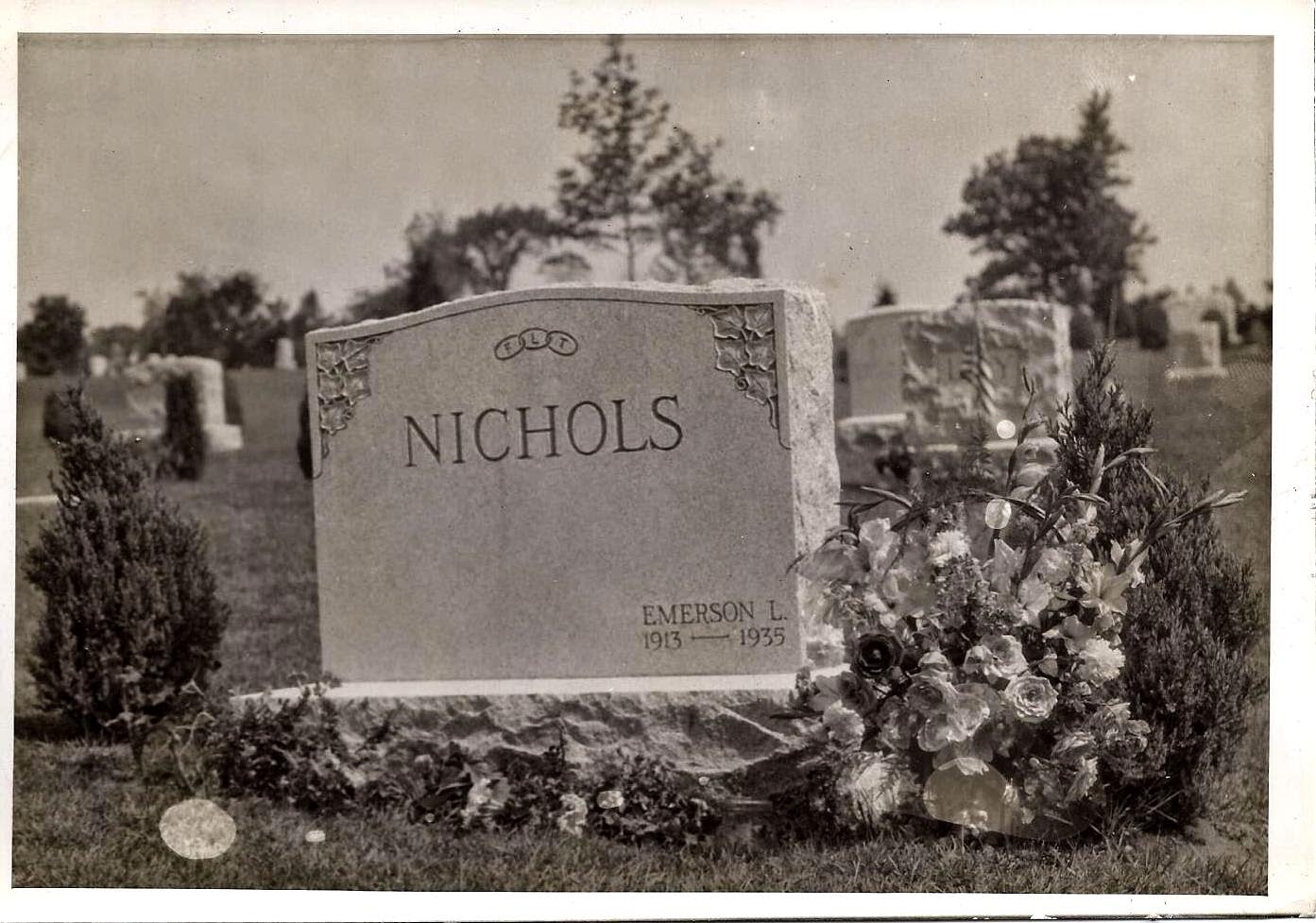 This picture of a gravestone was among the photographs I received from my aunt.  The inscription reads, "Nichols.  Emerson L.  1913-1935."  Naturally, I wondered who Emerson L Nichols was and how he relates, if at all, to my family.

I obtained the death certificate at the New Jersey State Archives in Trenton. 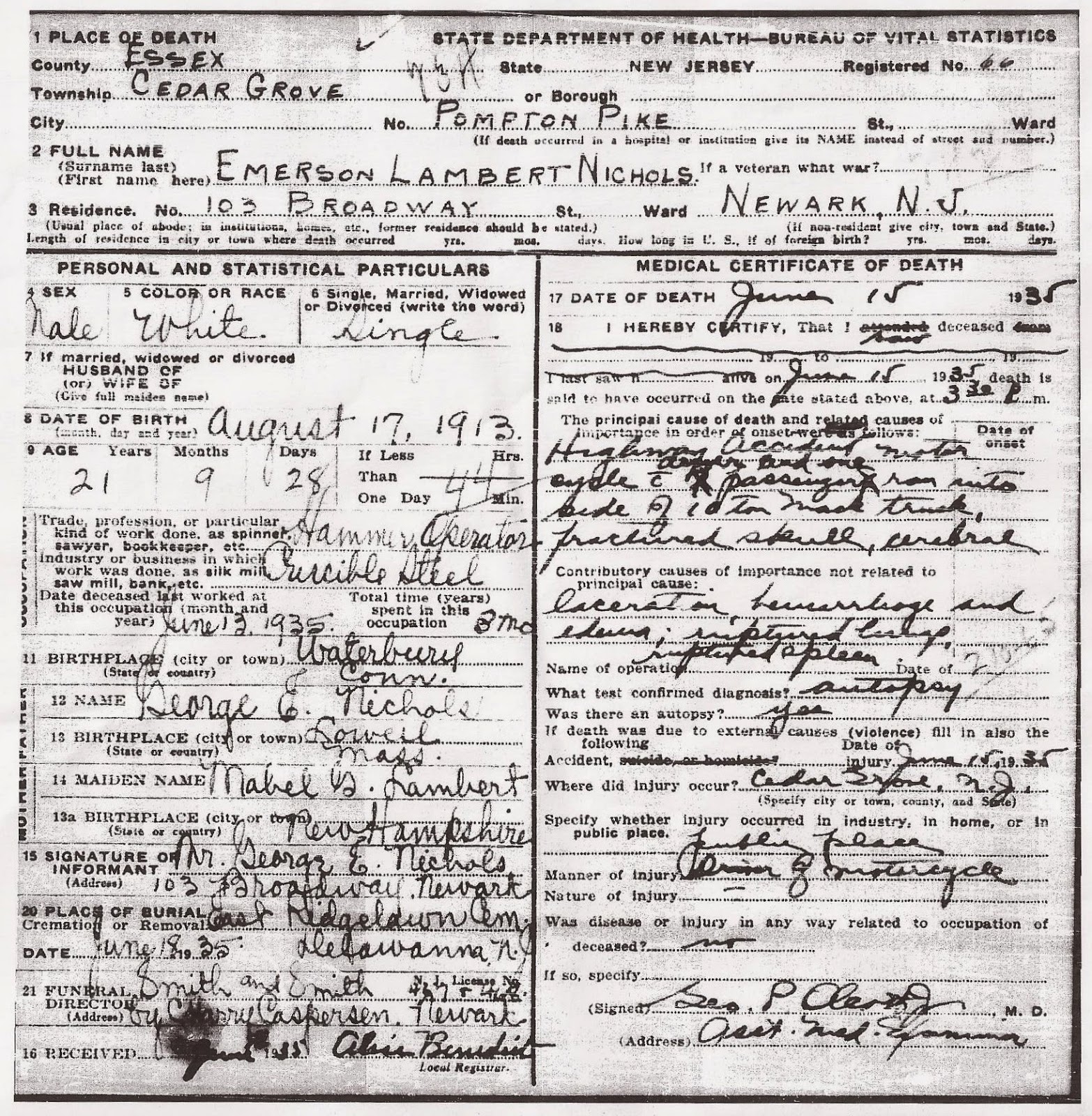 From the death certificate, we learn that Emerson Lambert Nichols died June 15, 1935 from a motorcycle accident.  He was 21 years old, born in Waterbury, Connecticut.  His parents were George E Nichols of Lowell, Massachusetts and Mabel G Lambert of New Hampshire.  He died on "Pompton Pike" (now called Pompton Avenue or State Route 23) in Cedar Grove, Essex County, New Jersey.  His residence was 103 Broadway in Newark.


The cause of death was "highway accident motorcycle with driver and one passenger ran into side of 10 ton mack truck, fractured skull, cerebral laceration, hemorrhage and edema; ruptured lungs, ruptured spleen."  Emerson was the driver of the motorcycle.  This accident sounds horrific. 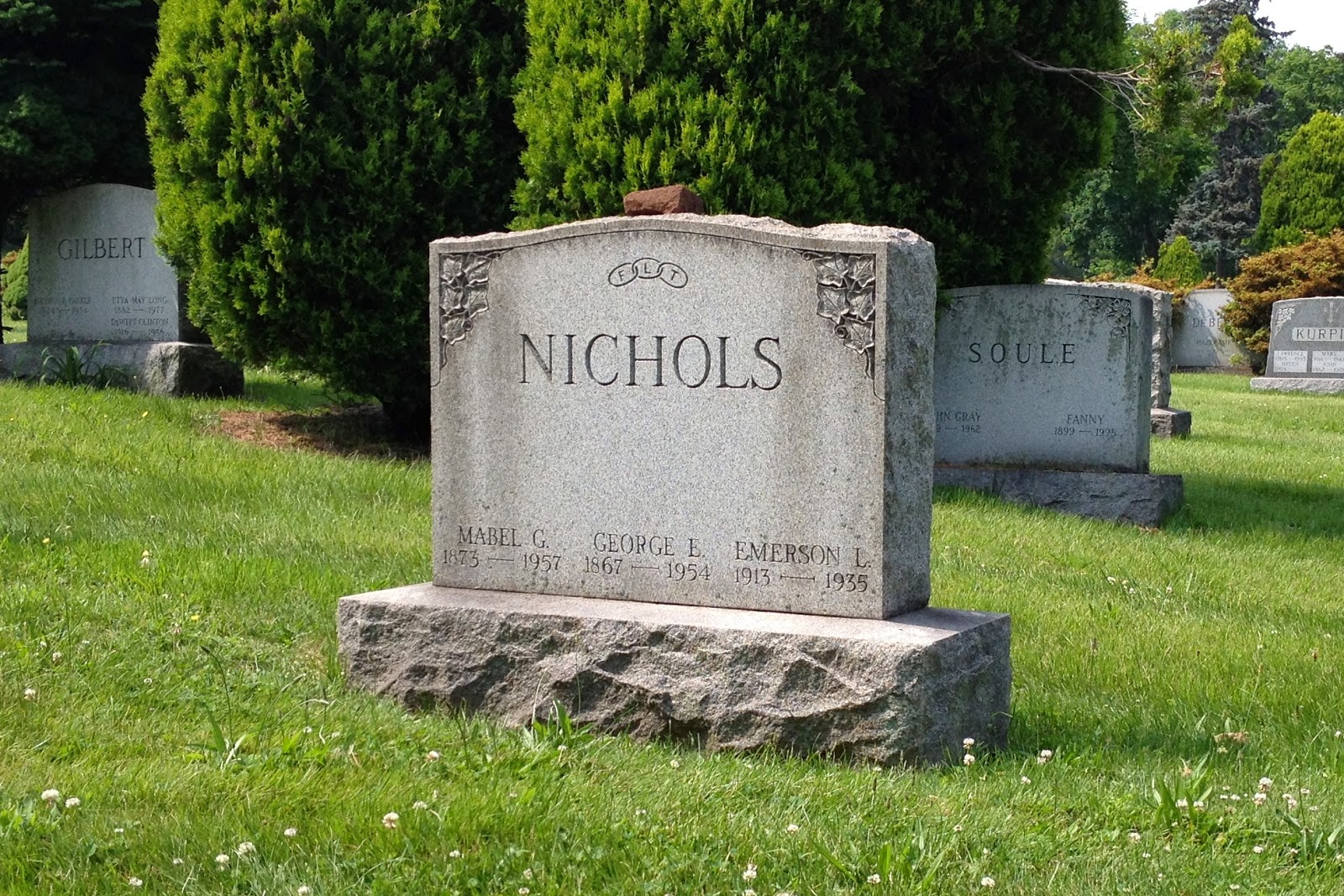 
In the older photograph, the gravestone in the background on the right with the letters L and Y is blocked in the recent picture by the Soule gravestone.  The surname is Lay. 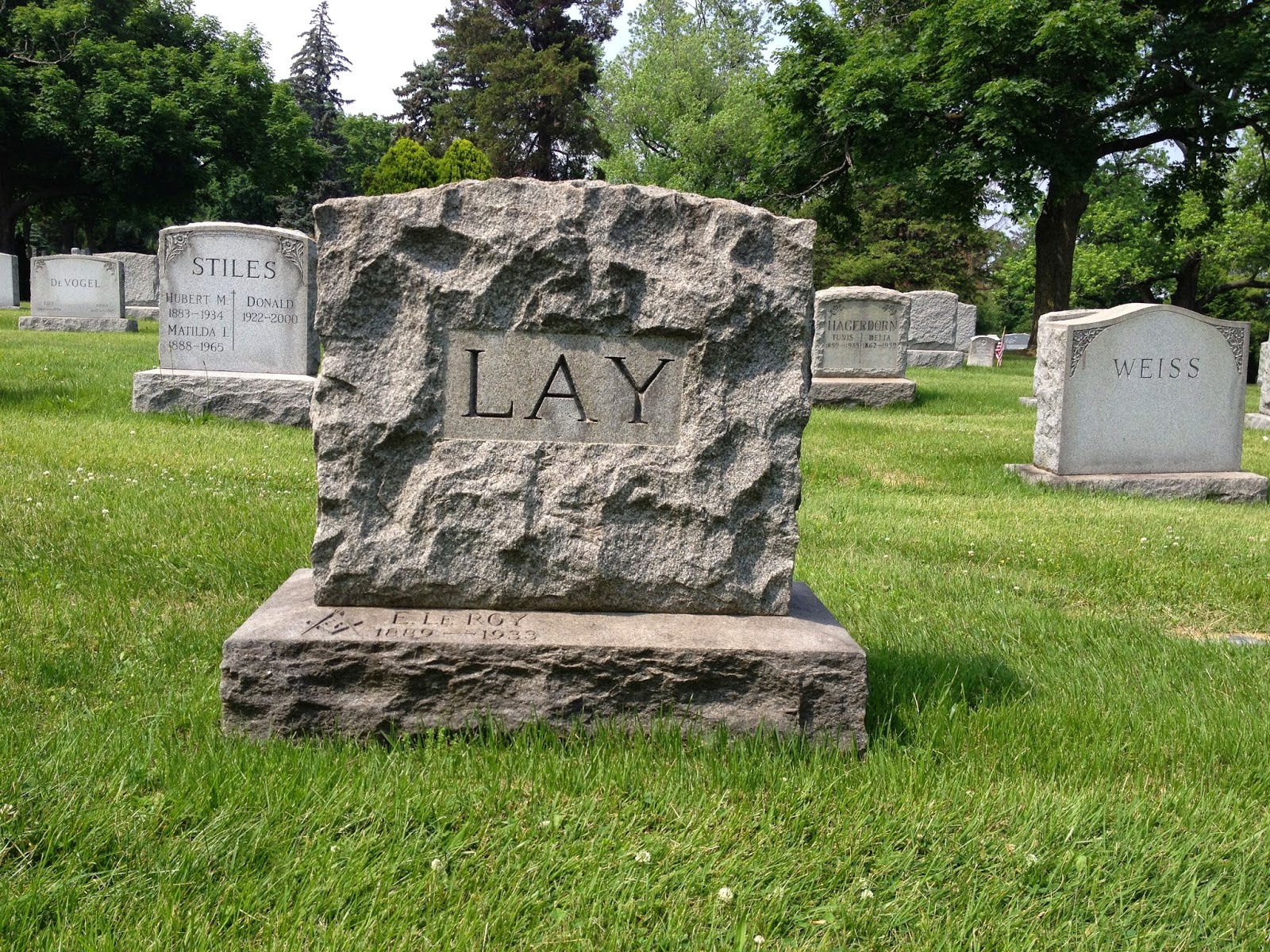 To the left in the old picture is a textured gravestone with two tiny shrubs in the row ahead.  Their view is completely blocked in the recent picture by large bushes and more stones.


The Campbell gravestone is the textured stone behind the small bushes in the older photo.  In the eighty years since the picture was taken, the bushes grew and were chopped down.  A gravestone was placed in between the bushes for Pucillo.

I don't know how Emerson Lambert Nichols relates to my family.  He was the same age as my grandfather, so maybe they were friends.  Maybe someone will read this and let us know.
Posted by Jody Lutter at 4:38 PM No comments:

Ancestry.com will no longer offer or maintain its oldest DNA services, the Y-DNA and mtDNA tests.  I was notified in an email.  I am not surprised by this announcement.  I have three such tests done at Ancestry.  The results have not been updated in years and are overshadowed by FamilyTreeDNA's offerings.  I uploaded the data file from the Y-DNA test to ySearch.org, which is free.  Although the tests and the results will disappear from Ancestry, you can download the data for use elsewhere.

***Ancestry continues selling and servicing their atDNA (autosomal) kits for $99.  This test captures DNA you inherit from all of your ancestral lines.

Last month, during a sale, I purchased two atDNA kits from Ancestry for my father and me.  The results are pending.  Two years ago I purchased a kit for an adopted person.  A close match appeared recently for her, confirming her surname at birth.  (The person has not responded to my inquiries.)

My very first DNA test was Ancestry.com's Y-DNA test for my father, purchased in 2009.  His results are compared against others in the database.  Men who have the same markers on their Y-chromosome share a common ancestor on their direct paternal line.  The more variation in the marker values, the more distant the relation.  Matches were found, but none were predicted to be related closer than twenty generations.  I cannot trace that far back on my father's direct paternal line.

I tested my aunt and myself for mtDNA, also called mitochondrial or maternal.  Similar to Y-DNA testing, this service matches you against people who share mtDNA with you.  Again, no close matches appeared.

In the last few years, FamilyTreeDNA has grown in popularity.  They offer Y-DNA and mtDNA tests, as well as atDNA tests.  Last month I purchased a Y-DNA test through FamilyTreeDNA for my father.  Results are pending.  When the results are available, I will post them and offer my analysis.

Inspired by images of family trees on walls, I ordered one from eBay and gave it a try.  Not bad for a minimalist like me.  I have several bare white walls to choose from.

The stickers are reusable, but delicate.  You do not have to strictly follow the model in the stock photo.

Posted by Jody Lutter at 6:13 PM No comments: