This is a guest post written by Tom Stevens.  Our paths crossed as I was researching a Lutter branch and he was researching a Kabitzki branch in Chicago, Illinois.  Below Tom details how he uncovered the genetic relation between his great grandmother, Elna Andersson, and her second husband, Peter Emil Hammerberg.  Thank you, Tom, for sharing your family story with us and thank you for your great work on the Lutter mystery.

Their daughter, my grandmother, Elsa Margit, was born August 8th, 1904 in Kristianstad.

Victor and Elna divorced around 1908 and Elna was sent to live in America with an aunt.  Their daughter, Elsa, remained in Sweden and was first raised by her maternal grandfather, Anders Persson, and later by her uncle, Per Andersson (a brother of Elna).

In 1912, my great grandmother, Elna Andersson, then living in Chicago, remarried to Peter Emil Hammarberg.

Peter insisted they send for Elsa, my grandmother.  At age 16, my grandmother boarded a ship and immigrated to Chicago to live with a mother she barely remembered.  On her Ellis Island documents, Peter Emil Hammarberg is listed as paying for my grandmother’s passage to America.

My mother told me Peter was a wonderful step-grandfather and was somehow related to my great grandmother, Elna.  Intrigued, I explored Peter Hammarberg’s ancestry.

Peter’s World War II draft record lists his date birth as March 31, 1878 in Helsingborg, Skåne, Sweden.  According to my mother, Peter had been banished to America, like Elna.  Peter supposedly was kicked out of college in Helsingborg for getting in a fight, so his father sent him off to America.

In 1900, Per (Peter) Emil Hammarberg was living with his parents and siblings in Sweden.  Below is the census for this year.  Per's father is listed as Per Persson, born in 1846.  The children have the last name "Hammarberg" instead of "Persson" or "Persdotter."  Prior to 1900, children’s last names were their father’s or mother's first name with “son” or “dotter” added.  Name Laws enacted around 1901 mandated permanent surnames uniformly passed on to the next generation.  Peter’s father chose the last name “Hammarberg” for his children.  You will soon see the origins of this new family name.  [If your head was not spinning enough with Swedish surname practices, brace yourself:  Newer laws allow people great latitude in changing names and many Swedes do so. --JL]

Here is the 1890-1894 Household record for Peter’s family in Helsingborg, before the Name Laws.  In this earlier census, Per Persson is listed as born on November 8, 1846 in Nosaby, Kristianstad. Note the absence of the surname "Hammarberg." 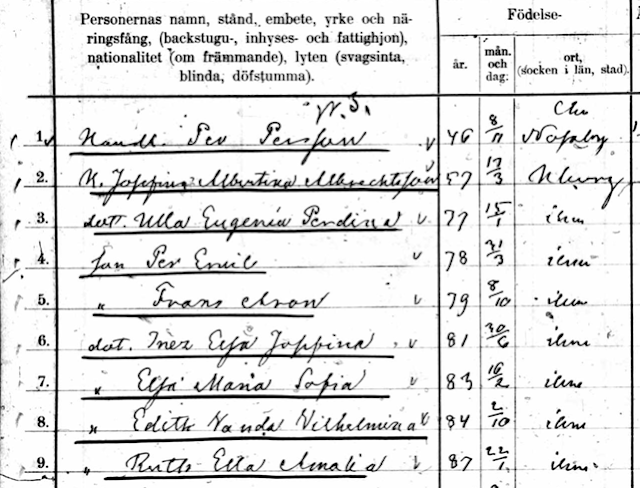 Here is Per Persson's birth record from 1846, listing his father, Per Månsson, occupation Bonde (farmer), and mother, Else Olasdotter.  They lived in the village of Hammar, in Nosaby parish, Sweden.  We now know why the name Hammarberg was selected in 1900- Per Persson used a location as a permanent surname for his children and subsequent generations.

And now the plot thickens.  Here is the birth record of Anders Persson, the father of Elna Andersson (my great grandmother).  Anders Persson was born on November 6, 1833 to Per Månsson and his hustra (wife) Else Olasdotter.

This is the gravestone of Anders Persson taken by my grandmother, Elsa, when she and my grandfather traveled back to Sweden in 1965. His birth year is 1832 on the stone, instead of 1833. Note that his residence, "No. 1 Hammar," is etched on the stone.

My Mother and I visited the cemetery in 2008 and it is a beautiful church.

Here is Per Månsson and family in the household records for 1845-1850.  The children were born in Hammar from 1831-1846.  Per Månsson's children include Anders Persson (my great great grandfather) and Per Persson, the father of Peter Emil Hammarberg.  I had to call my Mother and tell her that her grandmother, Elna Andersson, and her step-grandfather, Peter Hammarberg, were not distantly related, but rather were first cousins!  Elna and Peter did not have any children together.  Sadly, Peter Emil died in 1943 from pneumonia due to his occupation as an asbestos worker. 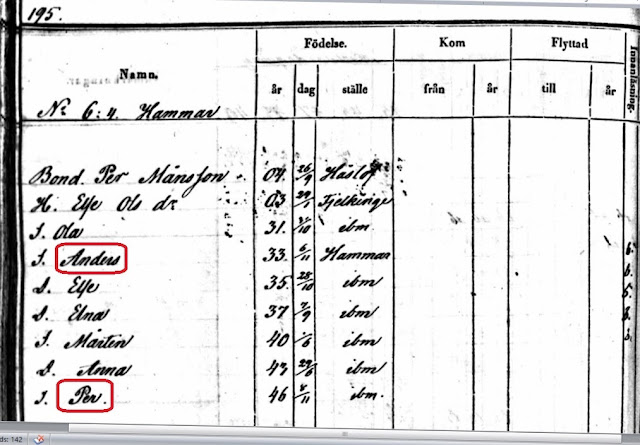 To research ancestors from southern Sweden (Halland, Skåne, and Blekinge läns or counties) the website “Demografisk Databas Södra Sverige” or Demographical Database of Southern Sweden” is an excellent starting place.  It is free and has Swedish and English versions.

Below is Per Emil Hammarberg’s 1878 birth record found in the DDSS database website.

Posted by Jody Lutter at 6:04 PM No comments:

Abraham Lent Brewer was born in 1826 in Greenburgh, Westchester County, New York, to James Brewer and Mary Lent.  His sister, Rene Brewer, was my 4X great grandmother.  Abraham married Fannie Duryea.  She was a sister of Stephen Duryea, my 3X great grandfather.  (We'll save that story for another day.)

Because Abraham predeceased his wife, Fannie, their entire estate passed to her family, which helped me immensely in identifying her siblings and their children.  [This is why you need to follow siblings and not just your direct line!]  In researching this couple, I discovered that Abraham Brewer was the source of the naming of the Brewer Fire Engine Company of the Monsey Fire Department.

Yet the exact dates of death for Abraham and Fannie eluded me.

They died within hours of each other in April of 1901, according to newspaper articles. 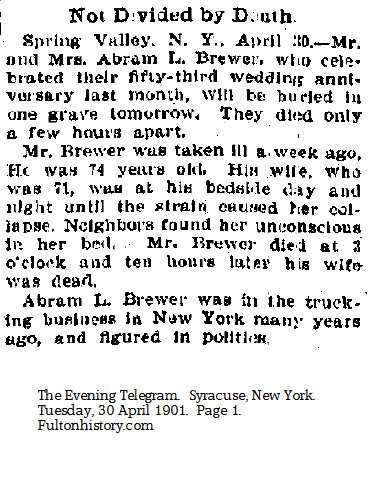 Their gravestone at Brick Church Cemetery in Spring Valley, Rockland County, New York, listed the year of death, 1901, without a month and day.  Only the International Genealogical Index ("IGI") gave a month and day:  April 28.  Below are copies of the actual paper submissions that the IGI is based upon.  Sources are not provided!


I ordered the death certificate for Abraham Brewer from the New York State Department of Health.  In return I received the death certificate for Fannie Brewer, his wife, with a date of death April 28, 1901 at 3 am.  This is the same date in the IGI for Abraham's death.  If the date in the IGI were correct, Abraham would have died between midnight and 3 am on April 28th in order for Fannie to have survived him, enabling her family to collect the entire estate.


Now that we have Abraham Brewer's death certificate, we can form a picture of what happened, using the newspaper articles.  Abraham died in the afternoon of April 27th.  After caring for him for at least a week, his wife, Fanny, retired to her bed and died.  Her 3 am time of death is probably an estimate after neighbors checked on her the following morning and found her dead, but reflects that the deaths were within hours of each other.  Their deaths were not on the same day/date, but rather within the same 24 hour timeframe.

The date in the IGI is incorrect by one day and further illustrates why you should be leery of certain databases as well as all unsourced information.