One of the DNA accounts I manage at 23andMe finally received notice to update in preparation for the transition to the new website format, which has been promised for over six months.  The main function of updating the account is to complete a new survey on ancestry and confirm access to health results.

A new feature that I do not have access to is viewing relatives in common with other relatives and whether or not all three parties share on the same segment of DNA or different segments.  This triangulation is necessary to assign areas of one's genome to the proper contributing ancestor, so I would really like to be able to start using this tool.  (Read here for an explanation of how I did this with ancestors from Morris County, New Jersey.)

Posted by Jody Lutter at 7:44 PM No comments:

Bible Records in a Newspaper

While perusing the Pine Plains Herald (Dutchess County, New York) at FultonHistory, I came across an article from 1880 describing family records in a bible.  The surname is Strever, a variant of Striebel.  Related surnames include Hoysradt and Dings.  Children were born in the 1700s and early 1800s.

If anyone has these actual pages from the bible, let us know.  It will be interesting to see if this bible or any other transcripts survived. 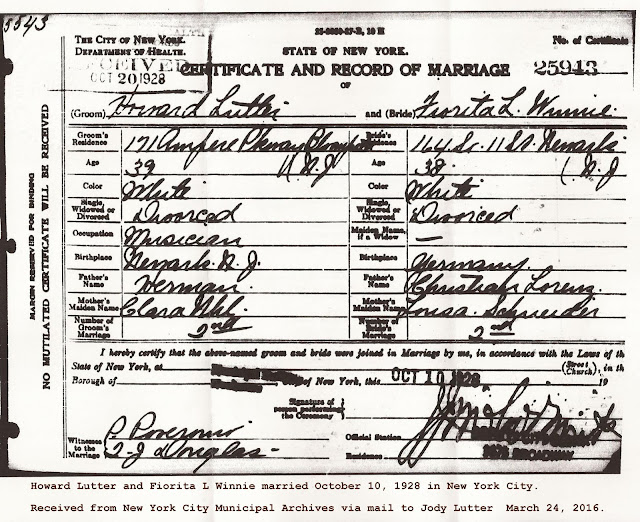 The record for my great grandfather's second marriage arrived in the mail a few weeks after ordering from the New York City Municipal Archives.  Howard Lutter married Fiorita Lorenz on October 10, 1928 in New York City.

Howard divorced Ethel Laurel Winterton in 1927.  ["E Laural" in the 1927 city directory above.]  Their divorce record included testimony from Fiorita, herself married.  Fiorita should have an interesting divorce record for her marriage with James Howard Winnie.

Fiorita was living in Newark, New Jersey in the 1910 census with "cousin" Adolf Eberhardt and his wife, Emilie, and their children.  Emilie, not Adolf, was probably Fiorita's cousin, as her surname was Lorenz.  Emilie and Adolf's daughter, Annie, married Conrad Ley.  Ann was the "distant relative" that Fiorita arranged to watch Howard Lutter's children.

Howard Lutter and "Rita" traveled to Trinidad in 1931.  Fiorita listed her naturalization "through marriage, Selma, Alabama, 1910."  I have not been able to find a record of the marriage, presumably to James Howard Winnie.

The next step was ordering the application for the 1928 marriage in New York City.  The indexes 1908-1929 were recently released via Reclaim the Records and can be viewed at Archive.org.  When it arrives, I will post and review.  The application is a separate document from the marriage certificate pictured above and may provide additional information. 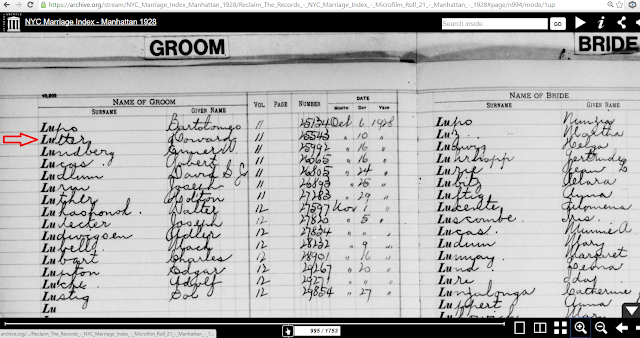 A Duryea family bible found its way to me via eBay.  (Thanks Uncle Howard!) 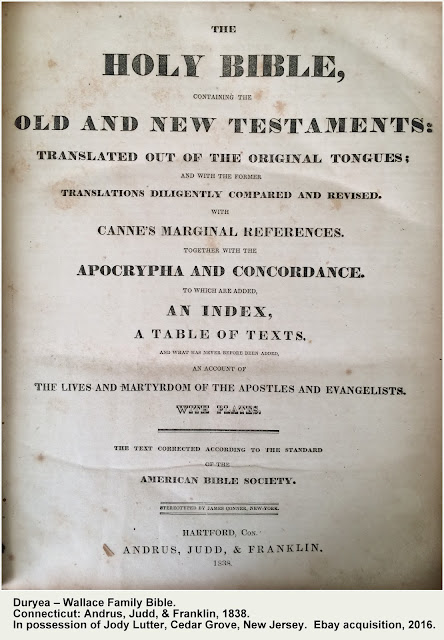 The bible itself was published in 1838.  In the front are loose papers from the Jerome and Leach families.  Within the bible are records for John Hudson Duryea (1810-1895) and his wives.  The connection that I can figure out is:  Richard Jerome (born 1753) and Esther Leach (born 1760) were the maternal grandparents of Spencer Cone Blake (1835-1911), who married Harriet Wallace (1839-1921).  Harriet's mother, Elizabeth Thompson (1815-1852), was the second wife of Reverend John Hudson Duryea.  Reverend Duryea served at the Second Reformed Church in Paterson, Passaic County, New Jersey. 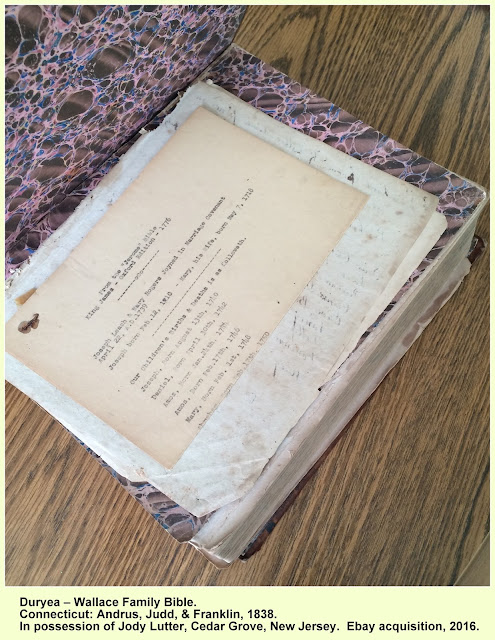 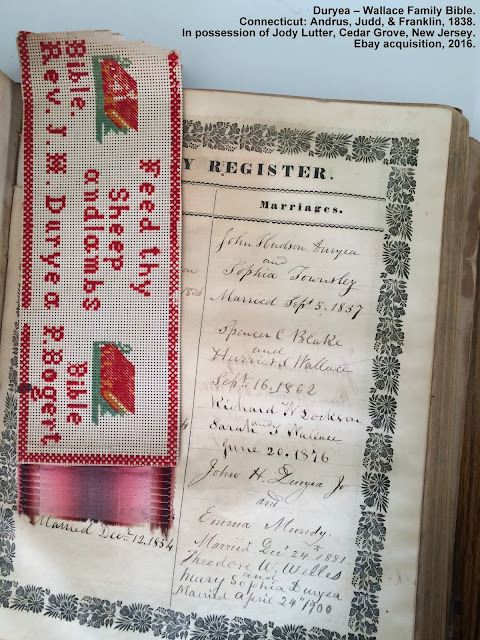 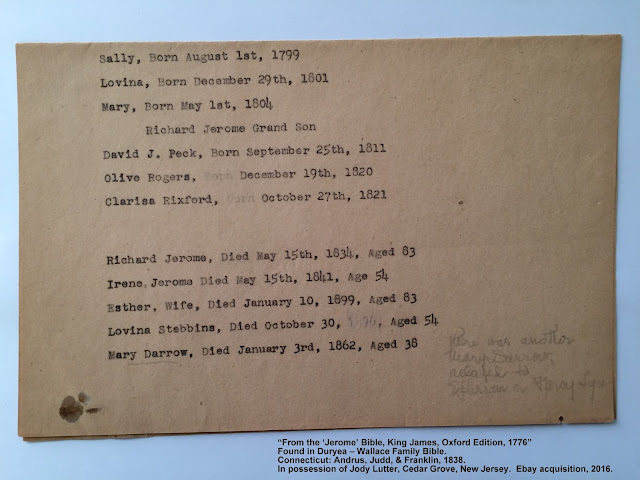 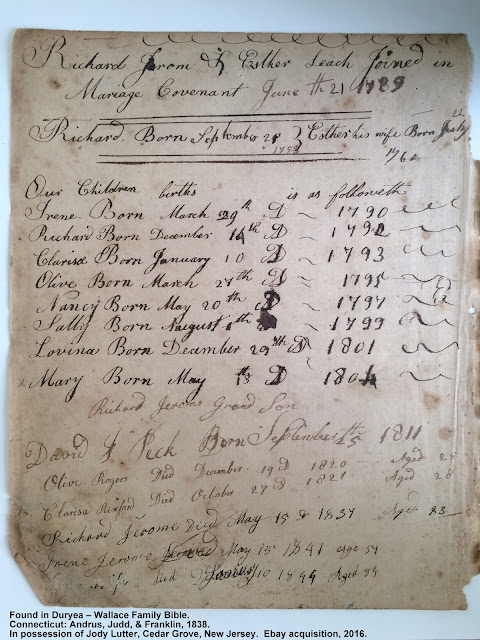 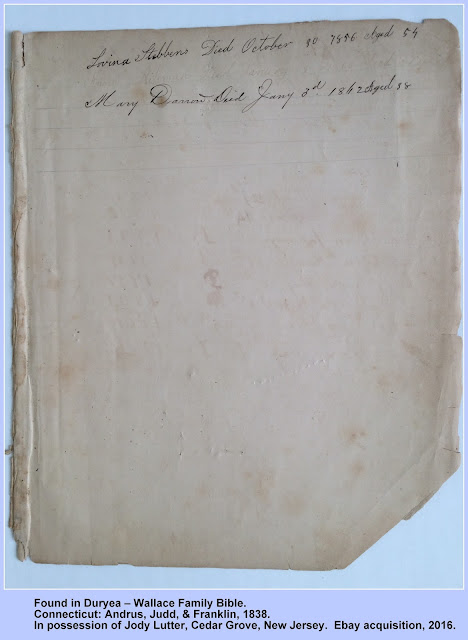 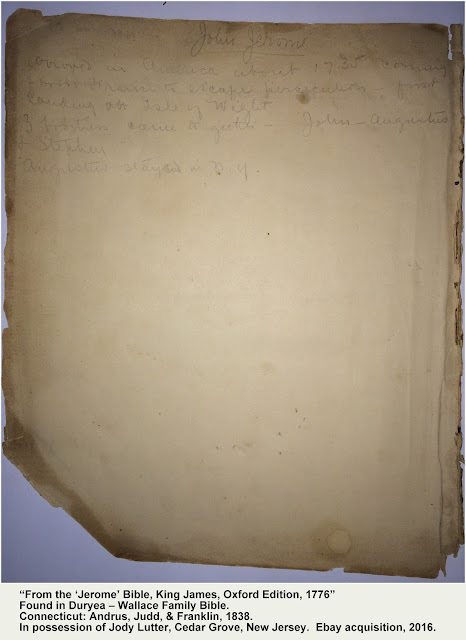 PAGES WITHIN THE BIBLE 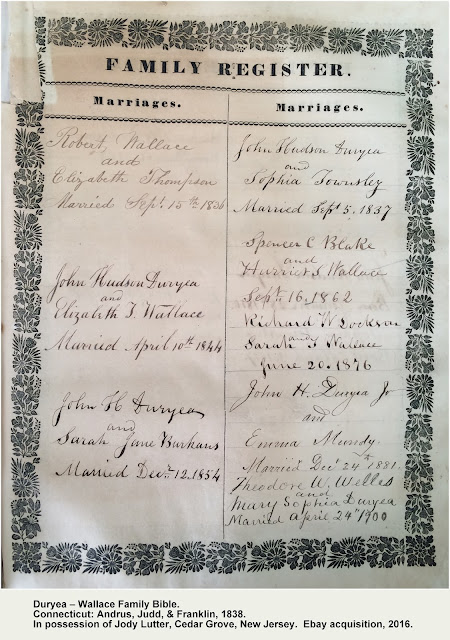 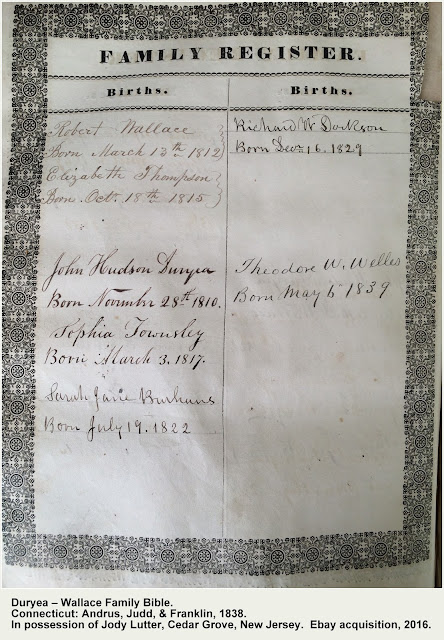 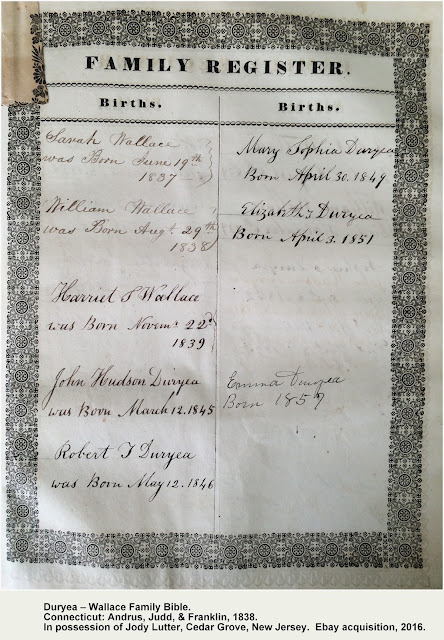 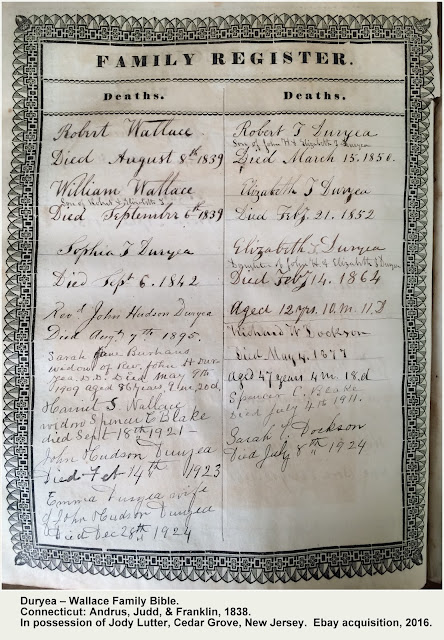 I transcribed the records for easier finding online and preservation.

Our Children  births  is as followeth

OTHER SIDE OF HANDWRITTEN PAGE

John Jerome
Arrived in America about 1735 coming from France to escape persecution – first landing on Isle of Wight.
3 brothers came together – John – Augustus – and Stephen.
Augustus stayed in N. Y.

NEXT TYPED PAGE (SEE ORIGINAL)
From page in back of Bible

Our children births is as followeth:

[In pencil:  There was another Mary Darrow, related to Ephriam or Percy Lyon.] 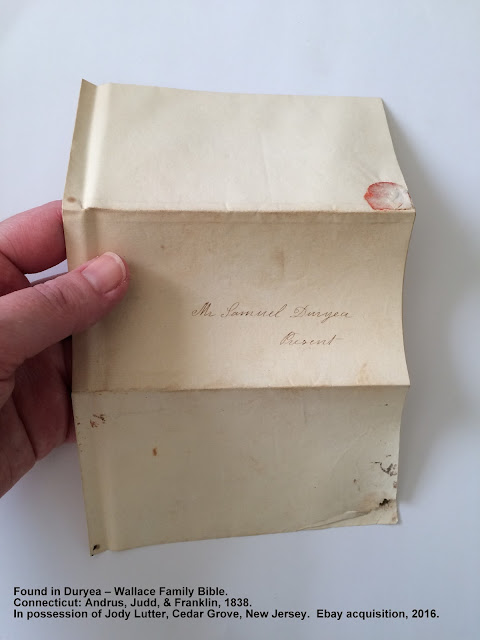 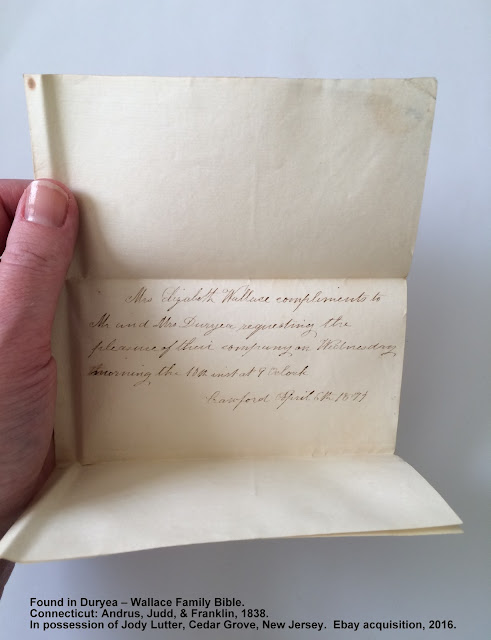 Mrs Elizabeth Wallace compliments to Mr and Mrs Duryea requesting the pleasure of their company on Wednesday morning the 10th inst at 9 oclock.

Posted by Jody Lutter at 1:23 AM No comments:

The death certificate for Alexander Lutter has arrived.  He died in Chicago, Cook County, Illinois on December 23, 1897.  Unfortunately, his parents are not listed.  He was 33 years old when he died of "fatty degeneration of the heart."  Is he a brother of my great great grandfather, Herman Lutter?  We still do not know. 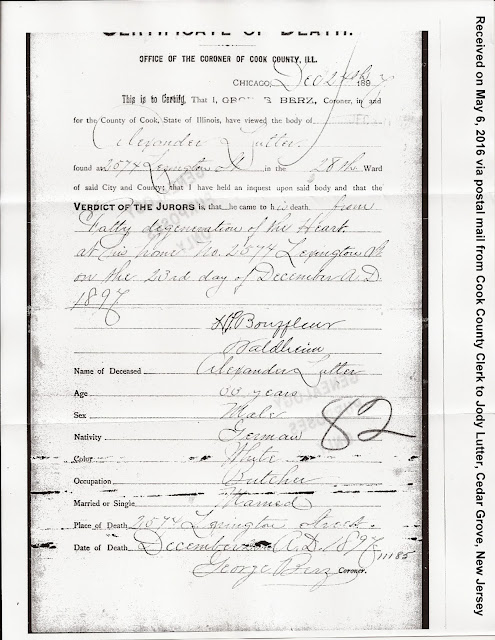 I obtained the date of death from a local newspaper, but the Cook County Archives were initially unable to locate a certificate.  (Alexander's wife, Ottilie Dahlke, died in 1904.  Her death certificate was easily found and listed Waldheim Cemetery as the place of burial.  Two cemeteries share this name, but neither could locate a record of this Lutter branch.  One is still named Waldheim; the other is now Forest Home Cemetery.) 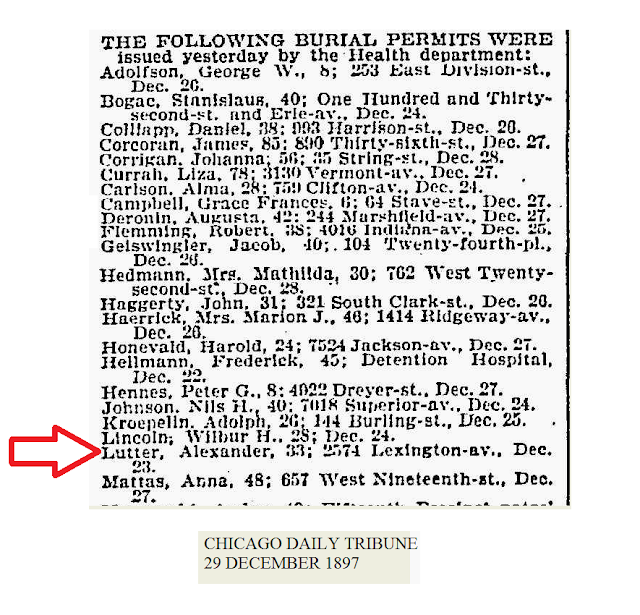 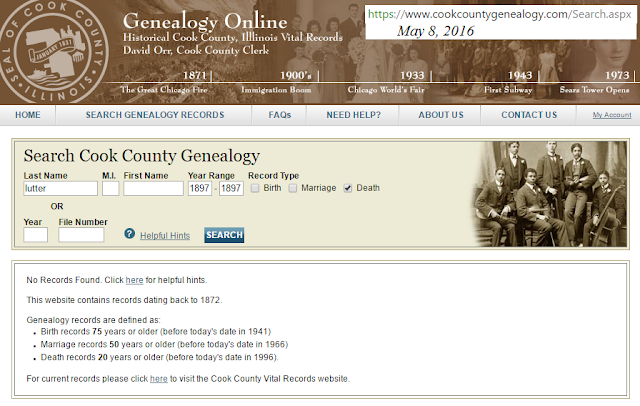 Alexander Lutter does not appear in the online index through Cook County's search page.  Actually, no deaths for the year 1897 appear in this index. 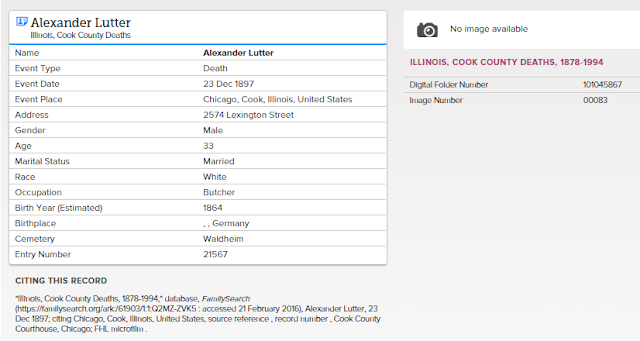 The death certificate referenced a coroner's report.  An online index provided the location of this record.  I sent away for a copy.  The slightest clue could help place this piece of the puzzle into a larger picture.

This is done as a quest to find Alex Lutter, a witness to the marriage of my great great grandparents, Herman Lutter (1860-1924) and Clara Uhl (1864-1955) in 1888 in Newark, Essex County, New Jersey.  I find no record of an Alexander Lutter in Newark and no connection between the Chicago Lutters and my Lutters.  Herman Lutter's will mentioned children of two siblings, Otto and Ottilie, but not Alexander.

The only hint that tells me that I could be on the right path is a DNA match at AncestryDNA to a great great granddaughter of Alex Lutter and Ottlie Dahlke through their daughter, Emma, who married Frank Scaar.  This person has not responded to my inquiries.

Additional Details for a Family Story

One of the family stories of my maternal grandmother was that her grandmother, Delia Joyce (1862-1929), was a baby when her mother threw her to safety just as she was dragged to her death by a train.

The 1870 federal census has an accompanying mortality schedule that listed people who died in the year 1870 before the census commenced on June 1st.  Mary Joyce was on this mortality schedule in Pawling, Dutchess County, New York, as being killed by "cars" in May of 1870.  Her widower, Patrick Joyce, and four children, Mary, Adelia (Delia), John, and James were enumerated on the actual census.

Absent a death certificate, additional information was sought from newspapers.  The accident was in Katonah, south of Pawling in Westchester County, New York.  One article did not mention a child and another mentioned an infant child.  Delia was about seven years old at the time of the accident, so the focus was on one of her younger brothers as the baby who was saved.

I just found some more newspaper articles about this tragedy that clarify that the child was female, though she is not named and could have been Delia or her older sister Mary.  The articles appeared June 21st in the New York Herald and June 22nd in the Rochester Daily Union and Advertiser.

The key to finding these articles was by not using Mary's name as a search term.  Instead, I looked for articles containing Katonah (where the accident occurred) and Pawling (where Mary lived) with the narrow date of May or June of 1870.

Two newspapers carried the article about "a respectable married woman" from Pawling, not named, whose leg was "almost sever[ed]" by the train as she attempted to disembark when the train started to depart so that she did not leave her daughter who was already safely on the platform.

According to another article, Mary lived a few hours.

Mary (who was born as Mary or Margaret Campbell in Ireland, according to the records of her children), should not have been on the 1870 mortality schedule if she died after June 1st.  Perhaps her husband could not recall the exact date of death and the census recorder noted her information for the month of May.  Good thing this rule was bent because I may have never found any information on this sad story if Mary had not appeared on that mortality schedule. 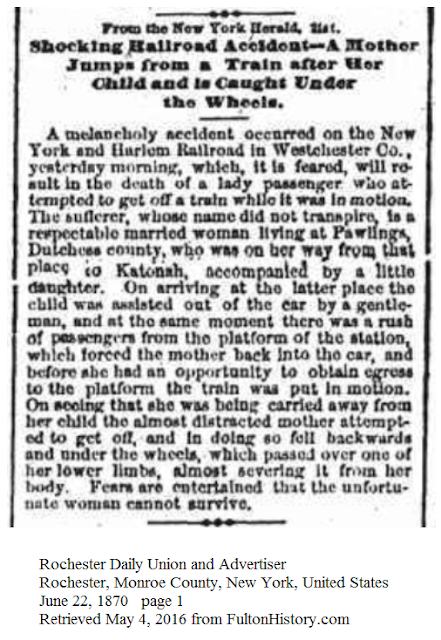 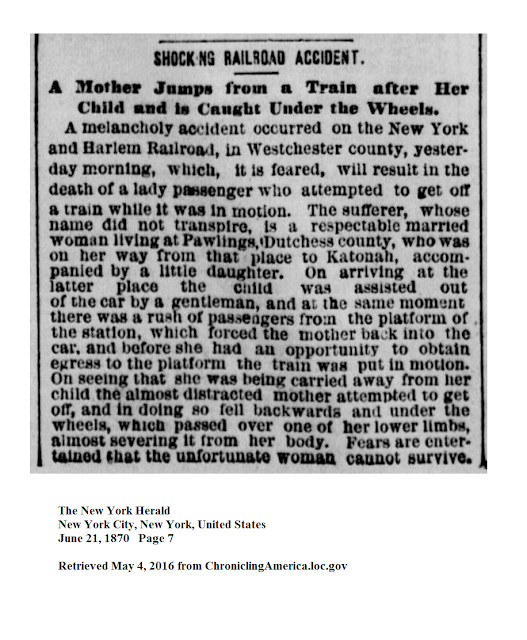 Posted by Jody Lutter at 8:41 PM No comments: