More markers were tested for an O'Donnell cousin's Y-DNA test at FamilyTreeDNA.  We originally started with only 37 markers, but the results were too numerous to work with.  Now 111 markers are tested.

(Y-DNA is passed almost identically from father to son through the generations.  A match on the Y chromosome means that somewhere back in time, two men share an ancestor on their direct paternal lines.  The fewer the differences between their Y chromosomes, the more recent the common ancestor.)

At this point, there are over 800 matches at 37 markers, but over 1400 matches at the higher level of 67 markers.  Jumping to 111 markers eliminates all but three genetic cousins.  If someone did not test at the 67 or 111 marker level, then they would not appear in those subsets.  A lot of the 67 marker matches are viable.  They just have not tested more markers. 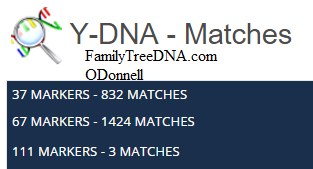 The top match at the 111 marker level is the same O'Donnell cousin of my initial focus.

This O'Donnell line came to Boston, Massachusetts from Ireland.  When I originally encountered this line, the most distant ancestor was listed as Philip O'Donnell.  After some research into two men both with this name living in Boston in the 1800s, Cornelius O'Donnell (1828 - 1899) seemed like a better match for the tail in this tree.  Cornelius' death record listed his parents as James O'Donnell and Mary Kerr of Ireland.

Adjustments have been made in my O'Donnell line as well.  To research in Ireland, you need an exact location.  I had a hometown courtesy of a more prominent branch containing Father Charles Leo O'Donnell (1884 - 1934).  The obituary of Patrick O'Donnell (1856 - 1931), my great great grandfather, stated that Father Charles, president of Notre Dame University, was his nephew.

Online trees and articles provide the parents of Father Charles as Cornelius "Neil" O'Donnell (1837 - 1909) and Mary Gallagher (1852 - 1924).  I thought that Neil O'Donnell was a brother of Patrick O'Donnell, my great great grandfather, and so my line was from Ardara as per the poem.  But- keep in mind that none of this online information is a primary or even secondary source. 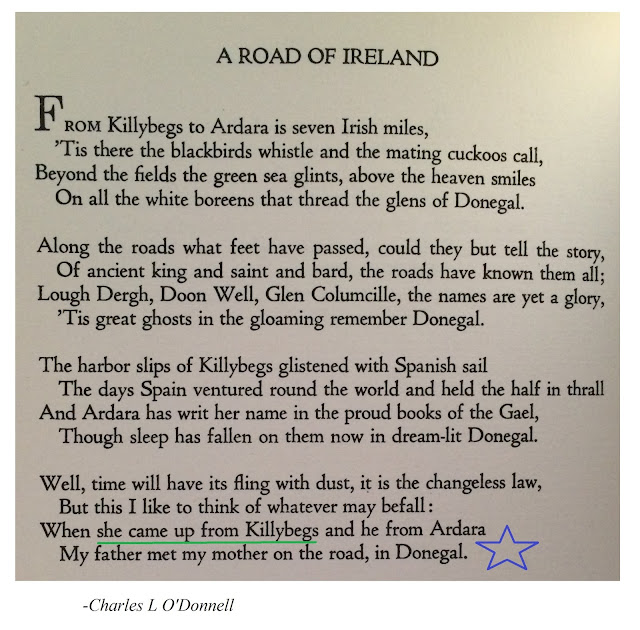 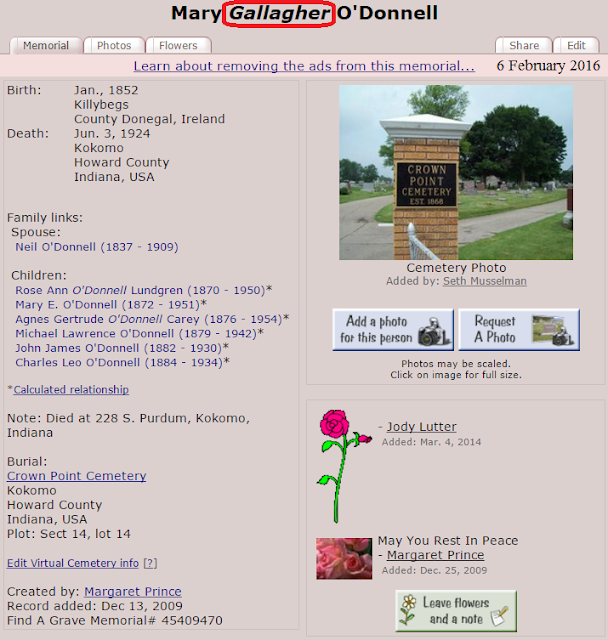 I noted that Mary Gallagher had the same surname as her husband's mother (working with the idea that his parents were Patrick's parents), but both names are plentiful in Donegal and not indicative of recent familial ties.

Then greetings came from Ireland.  (Thanks EO!)  A cousin of Father Charles wrote to me.  Neil O'Donnell was not the brother of Patrick O'Donnell, but rather a brother-in-law.  Mary was not named Gallagher; she was an O'Donnell herself.  So my O'Donnells were from Killybegs (see the poem), not Ardara.  Patrick and Mary were siblings; their parents were Peter O'Donnell and Margaret Gallagher.

I had no marriage record for Neil O'Donnell and Mary "Gallagher."  Their first child, Rose, was born in Indiana around 1870.  The Indiana marriage index (online at Ancestry.com) has an entry for Neil O'Donnell and Mary O'Donnell, married 4 November 1869 in Hancock County.  I ordered the certificate by mail to try to confirm if this is the right couple.  They may have met "on the road, in Donegal," but they married in Indiana. 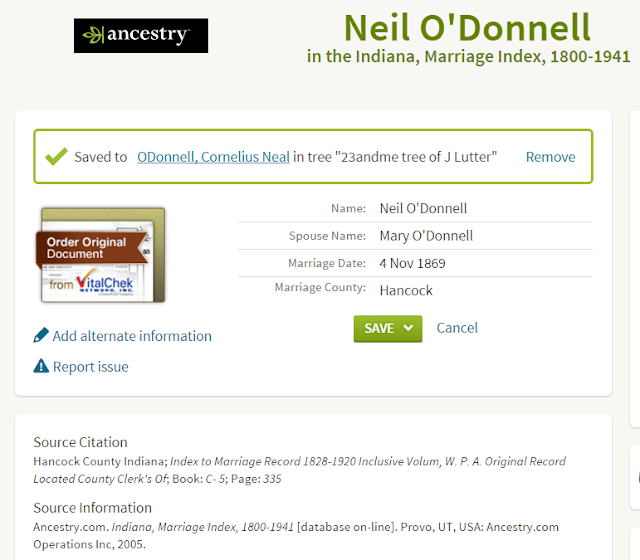 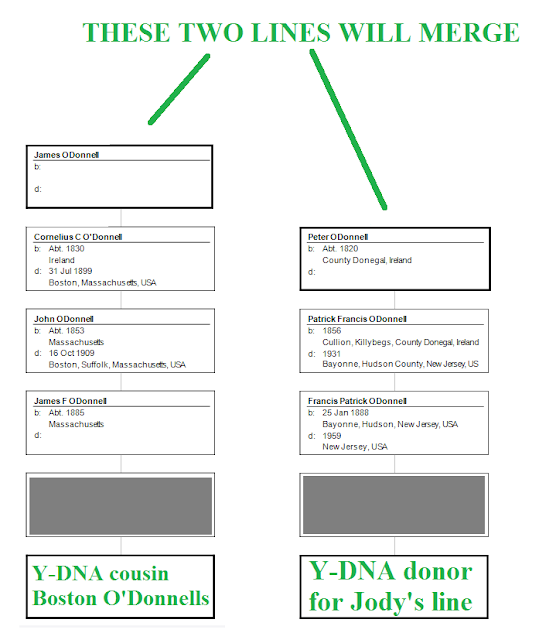 Posted by Jody Lutter at 7:16 PM No comments: