DNA shared with a Third Cousin

In a prior post, we were introduced to a third cousin who reached out to me.  The common ancestors are a pair of German great great grandparents who settled in Newark, New Jersey: David Uhl (1834-1884) and Clara Patschke (1840-1914).  I featured pictures of the heirlooms from these ancestors- some passed down through my branch and others through his branch.

Just as the heirlooms from these ancestors were dispersed to the succeeding generations, so was DNA.  This cousin kindly added his DNA to the ongoing genetic genealogy studies of the family at 23andMe.

My father and his three siblings all share autosomal DNA with this third cousin.

The amount of shared DNA for three of the siblings is on the high end, while the other sibling is on the low end, sharing only 43 cM. 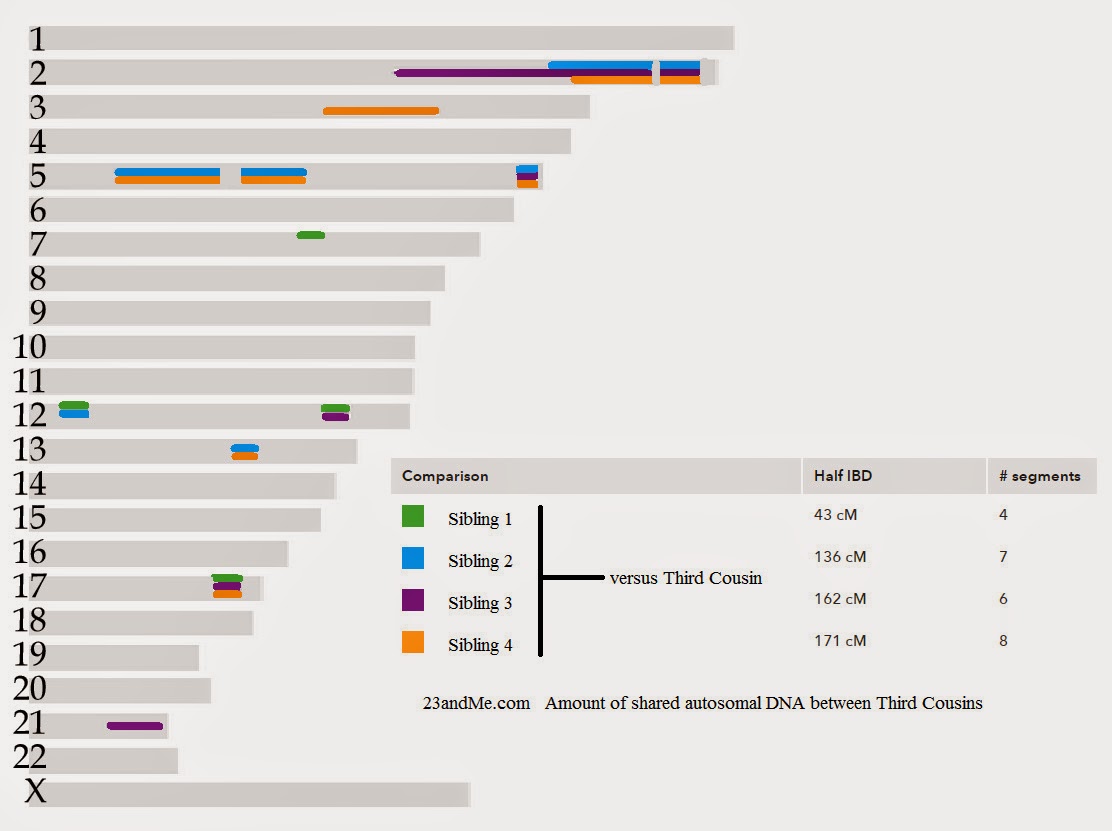 This picture represents where on each chromosome these 3rd cousins match.  The colored lines represent segments of DNA that traveled four generations from David Uhl and Clara Patschke to their great great grandchildren.

Many people- "DNA Cousins"- match my father and his siblings on these segments.  If these DNA Cousins also match the known third cousin, then we know to look into the branch of our family that holds David Uhl and Clara Patschke.  I will have information that the DNA Cousins do not, and vice versa, and we will break down brick walls.

When compared to my father and his two children (my sister and me), we see interesting results.  I inherited most of my father's DNA that he shares with this third cousin.  My sister received almost nothing:  13 cm over two segments.  This is such a small amount that a DNA testing company may not even recognize it as a match on its own.  Imagine if my sister were the only one who tested her DNA.  A match this small would likely be disregarded, yet it is fully solvable based on surnames and locations.

Two years ago, we compared DNA to another third cousin from a different branch- great great grandparents Calvin Cook (1826-1889) and Mary Neal (1830-1898).  The amount of shared DNA was lower than what we see with the Uhl/Patschke cousin, with a low of 70 cM to a high of 121 cM.  The next generation- my sister and me- inherited none of this DNA.