I, James Combs, of the township of upper freehold In the County of Monmouth and State of New Jersey, Being of Sound mind And memory, Do make and Publish this for my last will and Testament.

First my Will is I Do Direct and Impower my Executors Herein after named to Sell and Dispose of all my Lands of Every Discription in the way that they Judge most advantagious and for them to execute Lawfull Deeds of Conveyance for the same.

Item.  I give and Devise unto my Beloved wife one good Feather Bed, Bestead, and the necesary Beding and I Direct my Executors to pay out of my Estate as much as shall be sufficient to Support my Widdow comforably for one year after my Decease, and I also give my Executor in trust the sum of Three hundred pounds, which sum I Direct them to put out upon Intrust as soon as they can safely do it.  And to pay the Intrest arising thereon anually as soon as they Recieve it to my Widdow for her support and In Case that Is not sufficient for that purpose they are upon Necessary occasions to Expend so much of the said three hundred pounds as appears to be needfull, which maintainance I give unto my Widdow In lieue of her Right of Dower, and in case any part of the said sum Remains unoccupyed at the Decease of my Widdow after paying for her Burial and other Expences the Residue Is to be devided among my Heirs agreeably to the Distribution hereafter Discribed.

Item.  I give and Devise unto my Daughter Lydia Combs one good Feather Bed, Beadstead and the necessary Beding and also the Sum of Fifteen pounds In money to Be paid by Executor as soon after my Deceas as they Convenently can.  And I Direct my Executor to sell and Dispose of all the Residue and Remainder of my moveable estate and after paying all my just Debts and Burial Charges and Complying with what I have allready Directed, to Devide all the moneys Belonging to my estate Equally among all my Children Sons & Daughters Share and Share and Share alike and In Case any of my Children Decease Before me or Before the Devidend Is made and leaves Lawfull heir or Heirs there Devidend Is to go to them.

And Lastly I nominate and appoint my Friends, Edward Taylor and Samuel Craft, Executors of this my last will and testament.

In witness whereof I have hereunto set my Hand and Seal this Nineteenth day of the third month called March and the year of our Lord Eighteen hundred and six, 1806.  – James Combs --

Signed, Sealed, Published and Declared by the said James Combs to be his last will and Testament.
-- Noah Cain
--Samuel Evernham
--George Craft his mark

N. B.  The words (heir) & (or) was Interlined before Executing of this Will.

Samuel Evernham, one of the witnesses to the within will, being duly sworn on the Holy Evangelists of Almighty God, did depose and say, That he saw James Combs, the Testator therein named, sign and seal the same, and heard him publish, pronounce and declare the within writing to be his last will and testament- that at the doing thereof the said Testator was of sound and disposing mind and memory, as far as this Deponent knows and as he verily believes; and that Noah Cain and George Craft, the other subscribing Evidences, were present at the same time, and signed their names as witnesses to the said will, together with this Deponent, in the presence of the said Testator.
--Samuel Evernham--
Sworn at Freehold the 23d day of March 1813 before me- R. Throckmorton, Surrogate

Edward Taylor and Samuel Craft, the Executors in the within Testament named, being duly affirmed according to law, did severally declare and say, That the within Instrument Contains the true last will and testament of James Combs, the Testator therein named, so far as they know and as they verily believe- that they will well and truly perform the same, by paying first the debts of the said deceased and then the legacies in the said Testament specified, so far as the Goods, Chattels and Credits of the said deceased can thereunto extend- that they will make and exhibit into the Surrogates Officies of the County of Monmouth a true and perfect Inventory of all and singular the Goods, Chattels and Credits of the said deceased, that have or shall come to their hands or possession, or the possession of any other person or persons for their use- and render a Just and true account when thereunto lawfully required.
--Edwd Taylor
--Samuel Craft

Affirmed at Freehold the 23d March 1813.
Before me R. Throckmorton, Surrogate

The foregoing Will, being proved Probate was granted by me unto Edward Taylor and Samuel Craft the Executors in the said Will named, the being first duly Affirmed well and truly to perform the same, exhibit a true and perfect Inventory and render a just and true account when thereunto lawfully required.  Given the Surrogate Seal of the County of Monmouth, the day and year last above said.
--R. Throckmorton, Surrogate 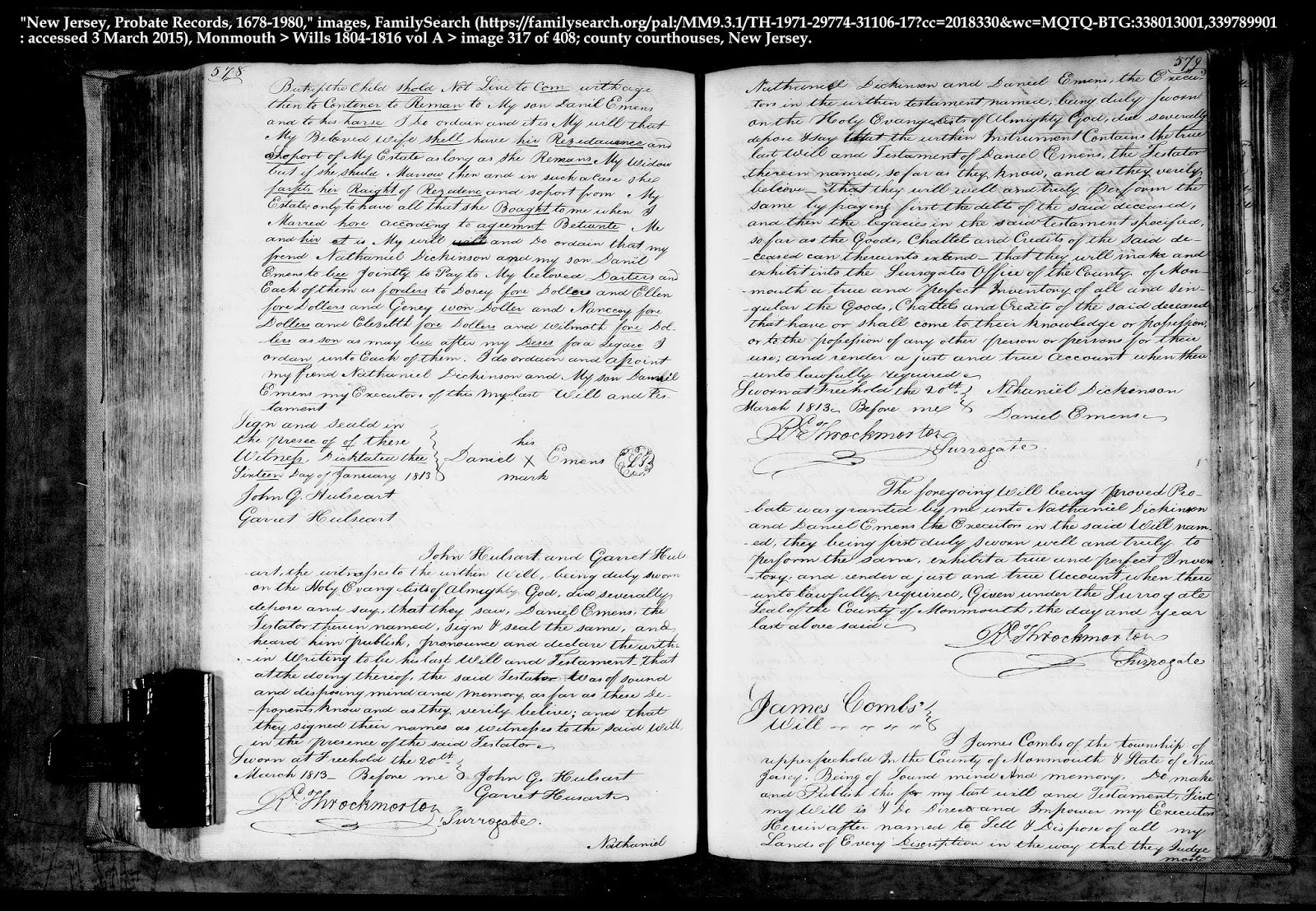 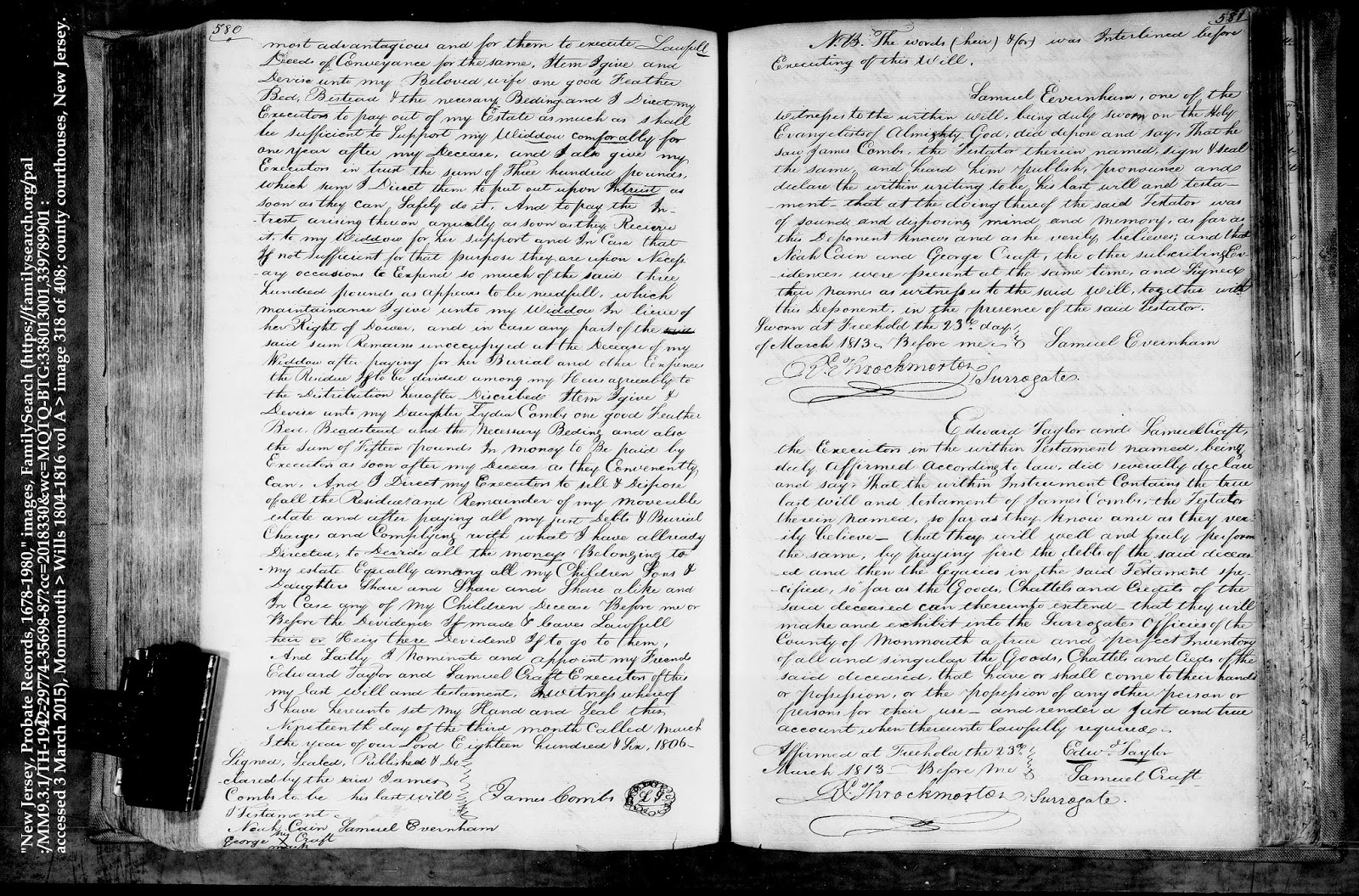 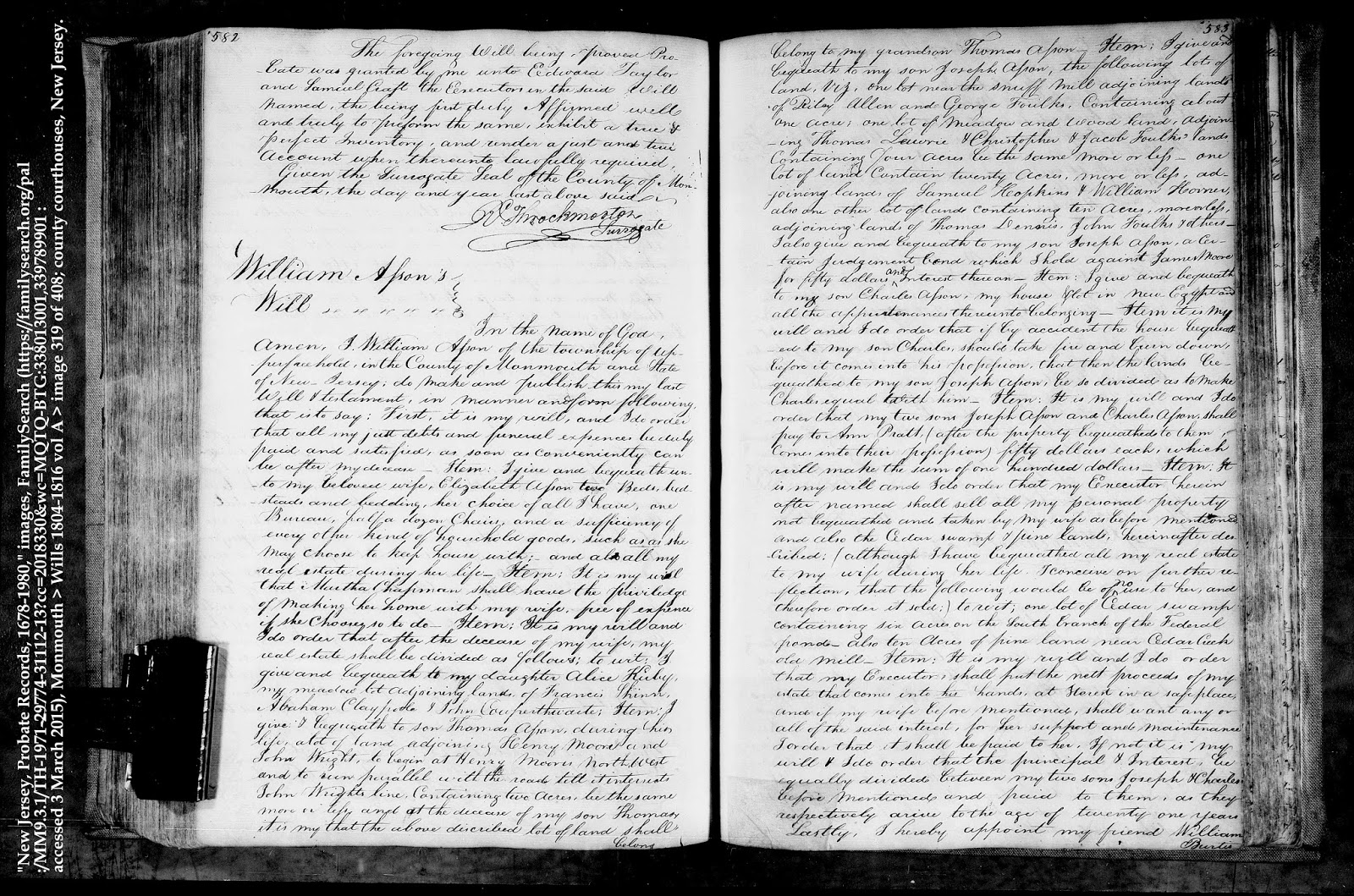