Anna S Andes (1870-1949) was married to James G Romig (1866-1905).  This couple appeared in the family tree of a DNA match whose recent ancestry I was reviewing, looking for the elusive common ancestors.

Anna is easy to locate once she was married.  Here is Anna and James in the 1900 census in Kansas with two of their children, James and Carrie.

The graves of Anna and James are posted on FindAGrave.  No parents are linked to Anna.  You can only link a child to a parent if you maintain the memorial.  The absence (or presence) of this connection is a guide, not proof.

Several online family trees have Anna as the daughter of Levi Andes (1844-1910) and Susanna Stark (1846-1914).  California's death index is online at Ancestry.com.  Anna died in California in 1949 and her parents are listed as Andes and Stark in this index.  This is tertiary proof of Anna's parentage, even less reliable, because this is an index and not the original record.  Death records can be very informative, but the Names of Parents section can be wildly inaccurate.

The potential parents, Levi Andes and Susanna Stark, are easy to locate in the census.  But they aren't enumerated with a daughter named Anna.  Between 1880-1885, the family moved from Ephrata, Lancaster County, Pennsylvania to Newton, Harvey County, Kansas.

When a child is "missing" in a family's records, one explanation is that the childhood name and the adult name were different.  "Anna S," wife and mother, may have been called "Susie" growing up.  To test this possibility, I looked for Susie Andes as an adult- and I found her.  Susan was born in 1871.  She married Robert Bascum Stayton (1858-1934) and died in 1922.  So Susie is not the missing Anna.

The next records to turn to locate a missing child or sibling would be wills and obituaries.  I don't usually deal with records in Kansas or Pennsylvania.  [I've started Pennsylvania research for my Dunlop line, but that will be a different post.]  When I looked to Google for information on this family, I found a lovely and informative blog post written by the Harvey County [Kansas] Historical Museum and Archives.

The article, complete with photographs, explored the lives of three Andes sisters who worked as maids in Newton, Kansas after relocating from Ephrata, Pennsylvania.  Their names:  Annie S, Susie, and Winnie.  Their father was Levi Andes, a tailor and a minister.  This was the link I needed!

The article included a picture of the original, color marriage license for Annie S Andes to J. G. Romig, dated March 30, 1893.  Annie's father, Levi, performed the ceremony at his residence in Newton.  Additional information included that James Romig died in February of 1905 from injuries suffered in a train accident, leaving Anna to care for their two children, James and Carrie.  Anna later moved to California to be with her daughters, Carrie and Alice.  Yes- Anna was pregnant when her husband was killed.  The third child was born seven months after her father's death.

After reading that Anna worked as a maid in Newton, I returned to the 1880 census in Ephrata, Lancaster County, Pennsylvania, where Levi Andes and Susan resided with their children, minus Anna.  There was an entry for a ten-year old Annie Andes in nearby West Cocalico.  This Annie was a servant to the Wolf family.  I was hoping that was a mistake- how could a ten year old work as a servant?  There were many child servants in this community in the 1880 census, so such a situation must have been acceptable. 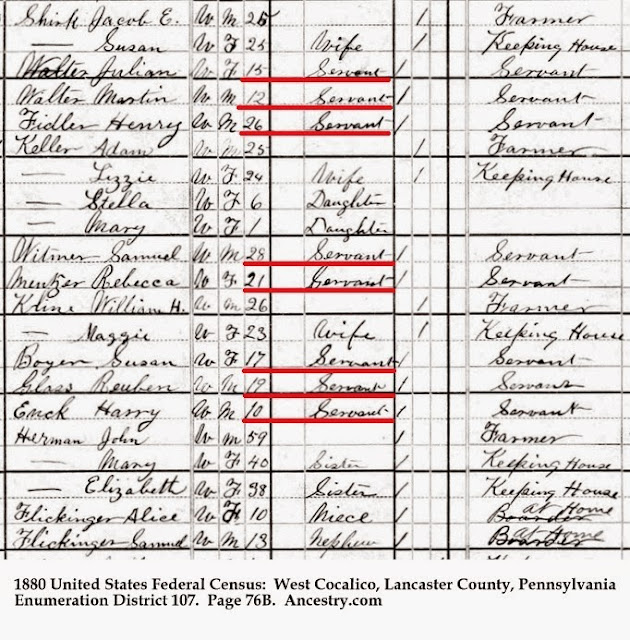 Because young Annie worked as a servant in other people's houses during her childhood, she is not found with her parents in the census.  That must not have been an easy life.