Last fall I helped index Newark, New Jersey naturalization records for the Italian Genealogical Group.  (That database is not online yet.)  I am now working on a new indexing project for the group:  deaths in New York City 1949-1963.  I have the M surnames for the year 1952.  I am entering the data from a typed index.  The current death index on the site covers New York City (all boroughs) 1898-1948.

Posted by Jody Lutter at 6:32 PM No comments:

Last week I attended a tour of the Morristown and Morris Township Library’s North Jersey History and Genealogy Center, organized by the Morris Area Genealogical Society.  The collections include resources local to Morris County, such as microfilmed church records, as well as resources that cover all of New Jersey and some neighboring states.  Morris County newspapers are digitized and available on the library computers only.  Indexes of these newspapers were compiled over the years and are in book form.  (Palladium of Liberty 1808-1822 and Genius of Liberty 1798-1811 are online and searchable at GenealogyBank.com with a subscription.)  Tens of thousands of photographs are being scanned and are appearing online gradually.

In October I purchased the upgrade for Family Tree Maker 2012 from Ancestry.com for $27.99 plus $5 shipping.  I have been working well with the 2011 version, but the price is fair and genealogy is one area in which I prefer to be up-to-date.  (Ironic, I know.)  I think that the main new feature of the 2012 version is syncing trees with Ancestry.com.  With older versions, once you publish a tree on Ancestry.com, additional changes to the tree must be made on both your computer and on the website, which can be slow and tedious.  With the syncing capabilities of the 2012 version, you can sync a tree from your computer to the website and vice versa.  (I do not recommend copying someone else's tree from a website to your computer.  Your research should be your own.)

Email ThisBlogThis!Share to TwitterShare to FacebookShare to Pinterest
Labels: software

Floating around the Internet this week were articles concerning an unsolved murder in Seattle, Washington in 1991.  DNA of a possible suspect was collected from the scene and it is hoped that the DNA will lead investigators to the person responsible for the killing.  What is remarkable about this particular use of DNA to solve a crime is that genealogy is going to play a major role.


Although not specifically mentioned, investigators are probably talking about Y-DNA.  Each human has 23 pairs of chromosomes.  The 23rd pair is called the sex chromosomes because males have an XY pair and females have an XX pair.  To procreate, each pair of chromosomes is separated into half and passed on as genetic material.  For the sex chromosomes, a female can only pass on an X.  The male can pass on an X or a Y.  If he passes on his X, the child will be female; if he passes on the Y, the child will be male.  As females do not have a Y chromosome, the genetic material contained on the Y comes the male line only, passed from father to son.  This is very useful in genealogy because all males on a direct male line from an ancestor of interest will have virtually identical Y chromosomes.  If you wonder if you are descended from a male passenger of the Mayflower, for example, you need to test the Y-DNA of a male who is related to you and who would appear (on paper) to be a direct male descendant of the theorized Mayflower ancestor.  Testing Y-DNA is also useful for comparing males with common surnames to see if they might be descended from a common ancestor.
Below are the results of a Y-DNA test for my father by Ancestry.com.  His closest match has an estimated most common recent ancestor ("MCRA") over 25 generations ago.  This is not particularly useful to me at this time.  I erased last names for display here, but none have last names that are even mildly similar to one another.  "Surname projects" are also available at Family Tree DNA.  A male with a last name of Lutter, Luther, Leuters, and so on could compare his Y-DNA to my father's to see if their last name comes from the same line.  It's like a math problem, where you get the answer first (DNA results) and then have to show the work (a paper trail). 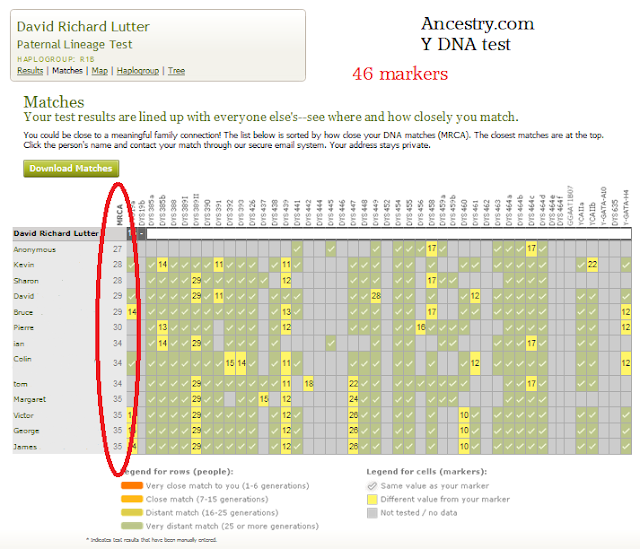 Shifting back to the 1991 murder, we have claims that the perpetrator is a direct male descendant of one of the Fuller men who lived in Salem, Massachusetts in the 1600s.  Is this possible to discover through DNA?  Absolutely.  That is why these Y-DNA studies are so powerful and useful for genealogy.  But- the man could also be descended from one of the ancestors of the Fuller men of 17th century Salem.  The DNA testing can put a time frame on the most recent common ancestor, but only within a few generations.  That is why we cannot tell, based on the DNA results, from which male Fuller the perpetrator descends.
Those of us who have researched back in this time period can tell you that spelling was inconsistent and name changes were frequent.  That leads us to another claim in the articles, that the perpetrator’s last name is Fuller.  This may or may not be true.  Adoption, name changes, non-paternal events (wink wink) were not invented by our generation.  The perpetrator could have any last name.  I would not like to see this investigation turn into a modern-day Salem witch hunt, but it very well may for men with the last name of Fuller.  On the positive side, those of you with Fuller ancestry can expect that your Fuller line is being thoroughly researched through four centuries as I type.
My next point is that the DNA identification to the Fuller line was made through unnamed "genealogy databases."  This is a legitimate concern for many of us who realize the valuable resource of submitting our own DNA for genealogical purposes.  Police may be able to compare our DNA in a genealogy database to DNA collected at a crime scene and either link us or a close relative of ours to the crime.  Is this any different from using yearbooks to try to identify a band of young miscreants wearing jackets from a local high school?  It will be interesting to follow this case and to see what other cases arise from the use of DNA and genealogy.
Posted by Jody Lutter at 11:08 PM No comments: