On Monday, I traveled to Mount Laurel, New Jersey for a seminar on nursing malpractice for my continuing legal education requirement that New Jersey decided is required of its attorneys. (Since I am both, the seminar suited me just fine.) Mount Laurel is outside of Philadelphia and required a two and a half hour drive. Such trips distress me because I pass so many other places of interest to my genealogical pursuits. I drove through Griggstown. I wanted to stop and explore if the town has anything to do with Helen Grigg (1873-1951), the second wife of Solomon S. Middleton (1846-1924). I had to keep driving. I have things to see in Philadelphia- should I have seen if any libraries were open that evening, after the seminar? I passed cemeteries. Some looked very old. Could they be undocumented and contain a relative that I could find serendipitously? I kept driving.

I had to make some use of the trip. I ended up visiting my father’s sister for her DNA for submission to ancestry.com. She is in south Jersey, but on the other side of the state, near the shore. It’s a small state, but with traffic, it took over an hour.

I think of DNA for genealogical purposes as a math problem, where you get the answer first, and figure out the computation later.

When ancestry.com started offering DNA testing, I ordered the kit. A male relative had to submit his DNA, so I used my father’s DNA. The result: the five closest relatives in the database are within 25-30 generations. Nothing closer. So far, the farthest I can document his paternal line is to his great grandfather, Herman Lutter, born around 1860. The drawback to this testing is that it tests only the direct paternal line. A person’s lines double with each generation: two parents, four grandparents, eight great grandparents, sixteen great great grandparents, and so on to the start of the human race (or whatever you think started this). So if I have this correct, my father’s test shows a tiny little fraction of my heritage.

After thought and correspondence, I ordered the female DNA test kit for myself. If I have this figured out correctly, it will show only my matriarchal line by looking at the mitochondria in the cells. I have such a line documented through my great great grandmother, Bridget A. Sheehey, born in Ireland around 1857.

I also ordered a test kit for my father’s sister. Her test should reveal her maternal line, which I have traced through to her great great great grandmother, Catherine Eckler, born about 1835.

So am I supposed to track down a bunch of relatives to document different lines through DNA? Or can I just pay a small fortune to have one of those crime lab DNA tests?

I will let you know what these maternal mitochondrial DNA tests reveal. 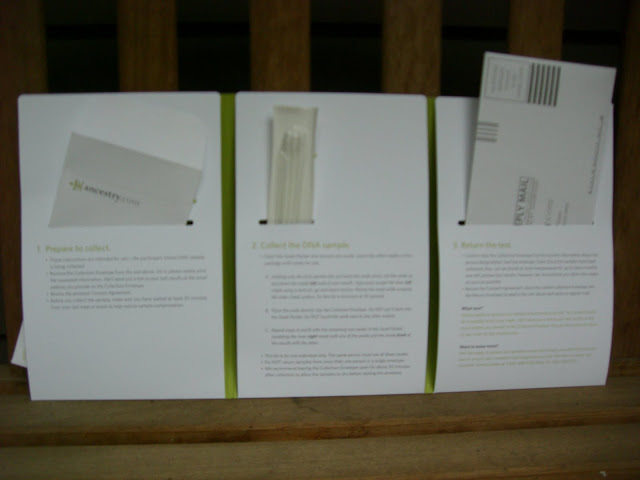