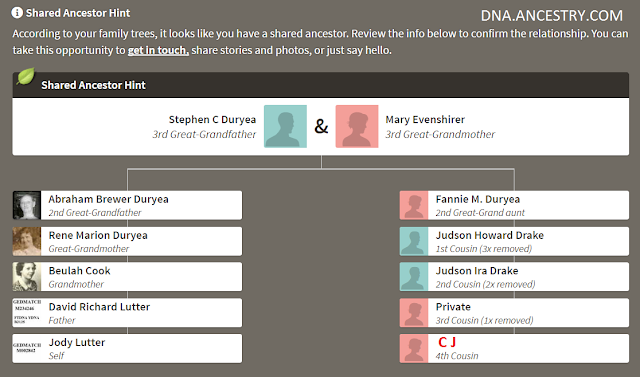 This was as far as we can go with our DNA tests at Ancestry because Ancestry does not let us see where the shared DNA is.  C J kindly uploaded Ancestry's DNA file to GedMatch so that we can utilize our DNA tests.

My father and his siblings are on GedMatch, as well as two cousins from the prior generation from this Duryea line.  Below is the table showing the amount of shared DNA with this cousin cluster.

Notice that the person in orange (my aunt), shares only one segment above 7 cM with C J.  A lot of people prefer to not work with small, single segment matches, as the most recent common ancestor could be very far back in time, or otherwise not discoverable.  The shared DNA of the other matches demonstrates the variability in the amount of shared DNA and that this is a workable match.

Dropping the threshold of the size of the shared segment to 3 cM, a visual graph of the shared DNA on the chromosomes was created thanks to Kitty Cooper's Overlapping Segment Mapping Tool. 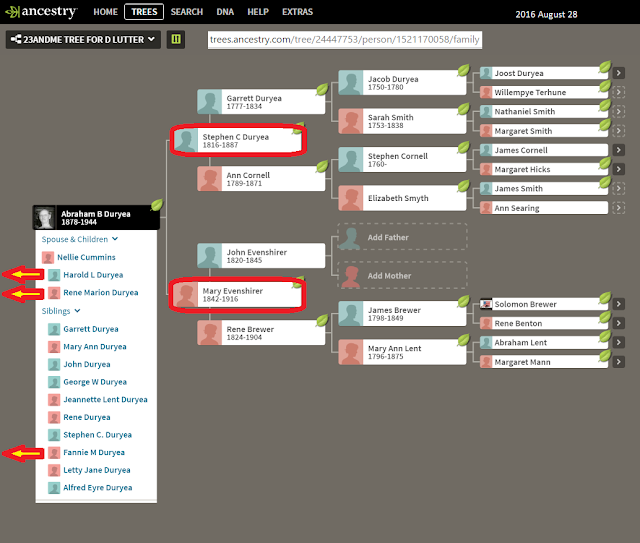 Some of the segments shared with C J were not previously attributed to Duryea/Evenshirer.  As seen in the current family tree, the parentage of John Evenshirer remains a mystery.  Some of his DNA may be represented in the shared segments with C J.

Everyone in my group matches C J on a segment on Chromosome 11.  Three other people also match on this segment with a size of 15 - 30 cMs.  We explored that the common ancestor was Abraham Riker, also known as Abraham Rycken Van Lent, who in 1654 built a house that still stands, with the family graveyard in the back, in what is now East Elmhurst, Queens County, New York.