When the New York City Marriage Index was published online (thanks to Reclaim the Records), I requested copies of the Application, Affidavit, and License for two couples.  Records from 1928 for the first couple, Robert Paul Shaw and Jane Louise Sonntag, arrived a few weeks ago.  The genealogical gem contained in these records, and not contained on the marriage return, was that the whereabouts of the bride's father were unknown.

Records for my great grandfather's second marriage in 1928 just arrived, three weeks later than the first request, perhaps because more documents were included.

Howard Lutter and Fiorita Lorenz married in New York City on October 10, 1928.  This was a second marriage for both of them after divorcing their first spouses.  The packet from the New York City Municipal Archives included copies of the divorce decrees of both parties. 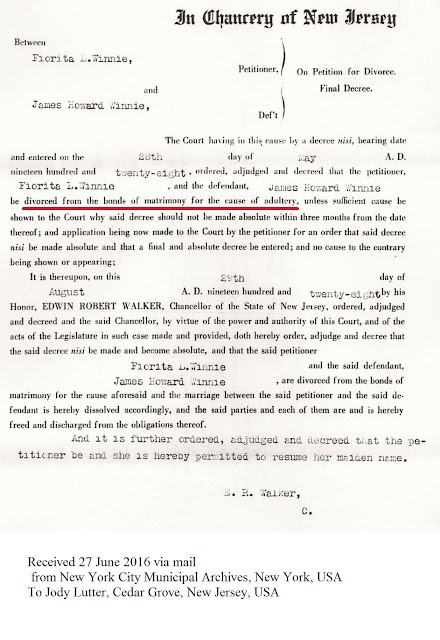 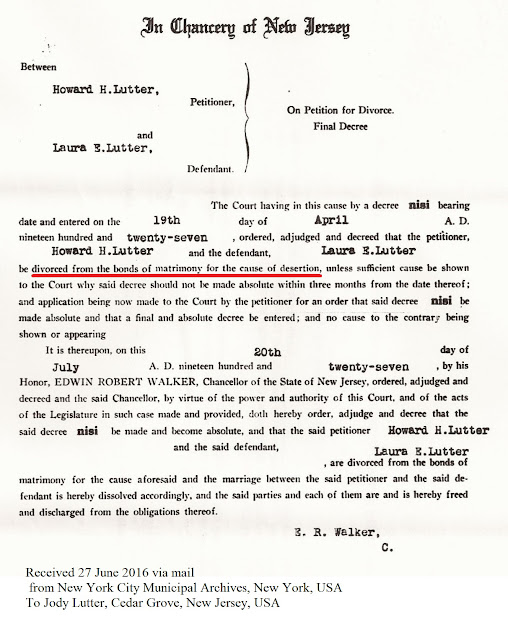 Howard Lutter divorced Laura (Ethel) Winterton in 1927.  The testimony of Fiorita Lorenz and other witnesses painted Laura as disinterested in her husband, children, and housekeeping duties.

Fiorita Lorenz was still married to James Howard Winnie when Howard Lutter and children moved into the Winnie home in Bloomfield, New Jersey.  In 1928, Fiorita divorced James for adultery.  The divorced was finalized September 6, 1928 in Essex County, New Jersey.  Fiorita sailed to France and returned to New York on October 9, 1928.  The next day she married Howard Lutter.

I still need to track down copies of the divorce testimony for Fiorita Lorenz and James Howard Winnie.  The divorce records for Howard Lutter and Laura Winterton can be found on DropBox along with the additional New York City marriage records.