Holy Name Cemetery is the final resting place for many of my family. The cemetery, also known as the Hudson County Catholic Cemetery, is in Jersey City, New Jersey.


"The Roman Catholic Archdiocese of Newark has made a small (but extremely significant!) improvement to their searchable database of burials (www.rcancem.org/find-a-loved-one-search). The database includes burials in some Catholic cemeteries within the Archdiocese of Newark (including Holy Name in Jersey City, Holy Cross in North Arlington, Holy Sepulchre in East Orange, and several other Catholic cemeteries in Essex, Bergen, Morris, and Union counties).

Until recently, a search for an individual in the database brought up the name of the deceased, the burial date, and the plot number. However, there was no way to search by plot number or to see who else was buried in the plot with that individual. The recent addition, a small magnifying glass to the right of an entry, generates a listing of individuals buried in the same plot with the person whose entry is listed. This is an extremely valuable tool for genealogists, who may find parents, children, siblings, and other extended family members buried in the same plot. There are still burials being added to the database, so it is an ongoing project.

This change was implemented following input and a suggestion from the New Jersey Records Preservation Group (www.NJRPG.org), who urged the Archdiocese to come up with a solution to help researchers determine who else is buried in plots with their loved ones."


Below are plot listings of people with no gravestones. Being able to view all the people in the plot is leading to new discoveries.

Edward drowned after diving from the pier off 49th Street in Bayonne.

She may be the Edna Mary Staley who appears in the Social Security Applications and Claims Index, born in 1921 in Schenectady, New York to Harry Staley and Edna Gallagher. I see no obvious connection to these Prestons. 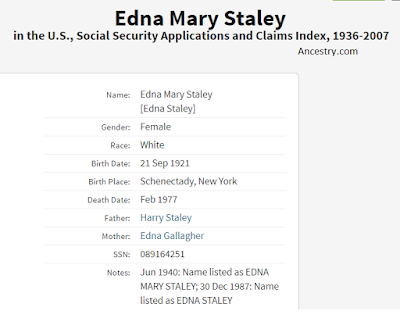 I had no idea who else was buried with Margaret and William. Now I have two additional names, Eliza OLeary and Patrick Thompson, but I do not know how they relate. I will copy their death certificates on my next trip to the New Jersey State Archives. 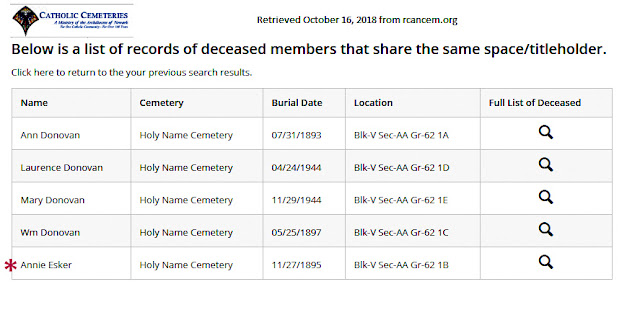 As discussed above, Laurence Donovan and Mary OReilly, died 1944, were the parents of William, who died in 1900 and was buried with Laurence's sister Margaret in a separate plot.

Annie Esker, died 1895, was a surprise. Using the indexes of New Jersey marriages and deaths, she may be Mary E Esker, a baby who died in Bayonne a day before burial at Holy Name. Her parents could be William Esker and Margaret Dailey, who married at Saint Mary's Catholic Church in Bayonne in 1894. They could have some relationship to Ann Daly, which would be great, because I have nothing on Ann's ancestors.

Again, I need copy the records for these people to figure out the connections. 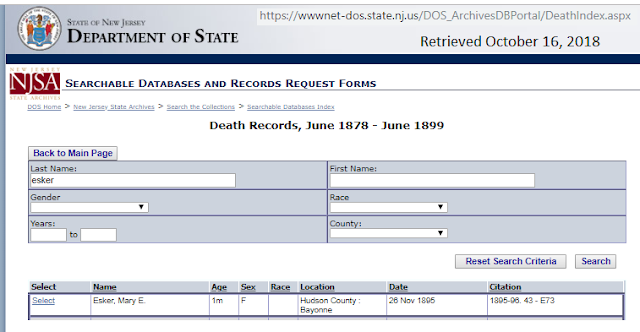