Jonas Long and Elizabeth Merrell: A Union Documented in Death

With the collaboration of other researchers, we can answer the question I asked last year:  Who were the parents of Susan Long (1818-1882)?

They were Jonas Long and Elizabeth Merrell.  Estate records were the key in this mystery.

Susan Long of E Town [Elizabethtown] married Eliakim Marsh in Essex County, New Jersey in 1839.  No parents were listed, which is not unusual for such records in this time period.  Susan died in Elizabeth in 1882.  [Elizabeth was in the newly created Union County by this time.]  The death certificate listed her parents as Jonas Long and Elizabeth.

Online trees and webpages provided an unsourced marriage for Jonas Long and Elizabeth Merrell in 1816 in Piscataway, Middlesex County, New Jersey, and even provided birth and death dates for Jonas.  Nobody who answered my inquiries could tell me where this information was found.  This couple was also listed as parents of Richard Merrell, born around 1817 in New Jersey, who relocated to Virginia, married Elizabeth Culpepper, and died in 1861.  Nobody could explain why Richard carried his mother's surname of Merrell. 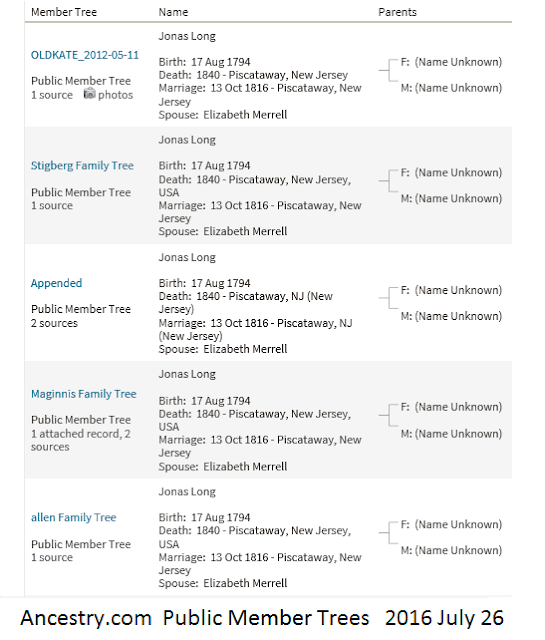 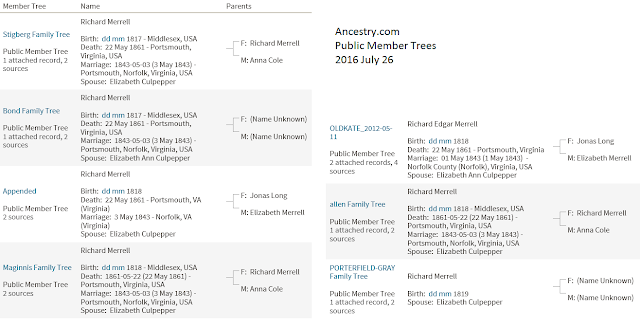 Chris G, a descendant of Susan Long and Eliakim Marsh reached out to me.  His DNA test at Ancestry.com matched him to a descendant of Richard Merrell (1817-1861) of Virginia, the supposed brother of our shared ancestor, Susan Long.  [I will discuss the DNA in a separate article.]  He asked if I had made any progress on locating records to better identify the origins of Susan Long.

Well, no progress.  But I did visit the Merrell grave on November 1, 2015 in Edison, though when they were buried it was Piscataway. 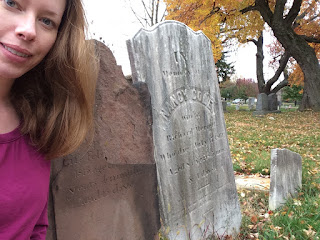 
The Strategy and Results

Richard I Merrell died after his wife and without a will in 1864.  His estate was probated in Middlesex County, New Jersey.  These papers are available (free) at FamilySearch.org.  [Note that Ancestry.com provides an index, but not for every page associated with an estate.  You need to go to FamilySearch.org and look at the court's docket and then locate the proceedings index, then locate all these files.] 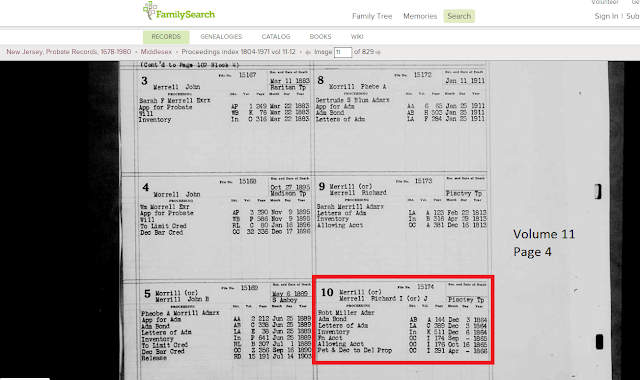 At first I was disappointed because Elizabeth was not among the signatures of Richard's children.  Phebe "Murton" was. 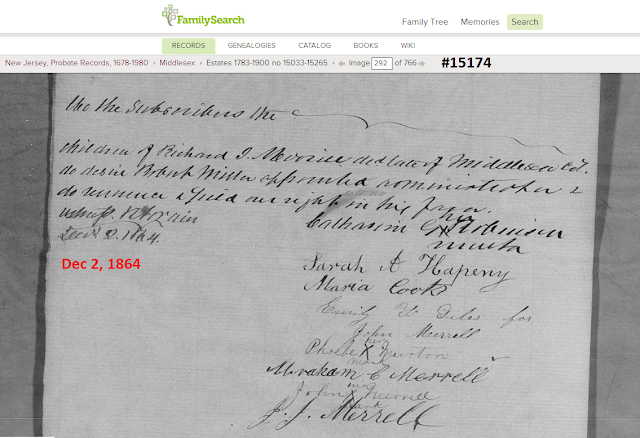 Some more digging through the estate papers produced a big piece of the puzzle.  Elizabeth [Culpepper] Merrell of Norfolk County, Virginia, through her attorney-in-fact Abraham LONG of Elizabethport, New Jersey, petitioned for her three children to receive a part of Richard I Merrell's estate.  She stated that their father was Richard Merrell, deceased; he was the son of Mrs Elizabeth Owens, deceased, and she was the daughter of Richard I Merrell whose estate was in probate. 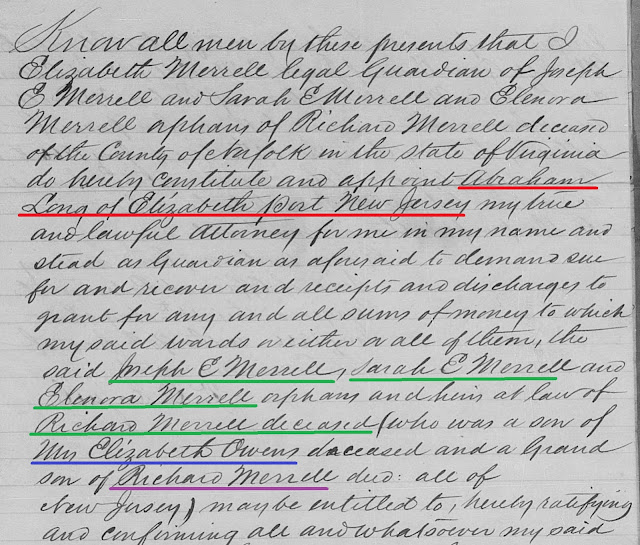 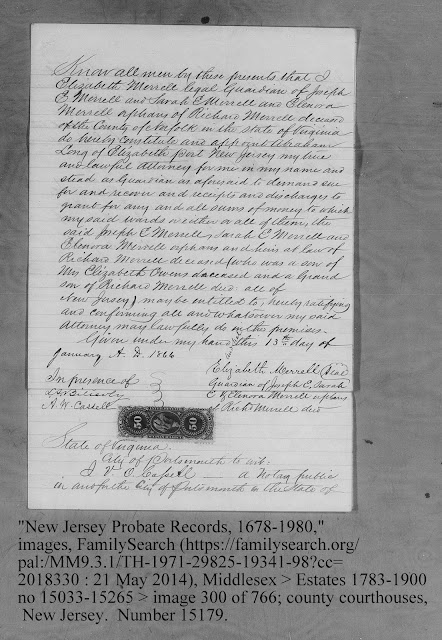 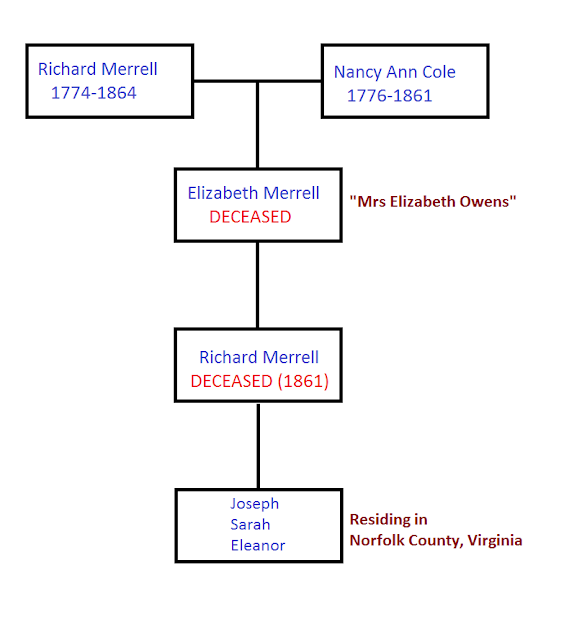 Elizabeth Merrell had remarried to a Mr Owens after Jonas Long died.

The oysterman, Abram Long, living with Elizabeth looks like the attorney-in-fact for the Merrell family in Virginia.  The 1850 census revealed Catherine Cook, another child of Elizabeth Merrell/Mrs Owens.  Why were Elizabeth's children not in the estate papers of their grandfather?

I needed the distribution of the estate to see if the Long children inherited anything.  This was not in the index, but I caught a mention of its location when carefully reading papers. 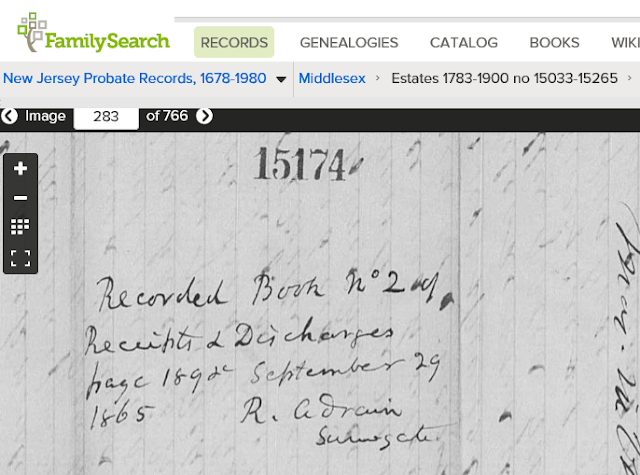 In the Releases and Discharges, "six of the children of Elizabeth Long a deceased daughter of Richard I Merrill late deceased" were listed:

Elizabeth Merrell's first son, Richard Merrell, who died in 1861 in Virginia, was not listed.  This omission could be why Richard's widow placed a claim in 1866 for her three children. 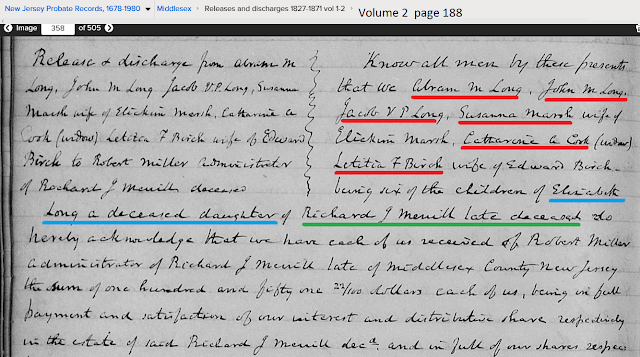 So Elizabeth Merrell and Mr Long were the parents of my Susan Long and she had six siblings! 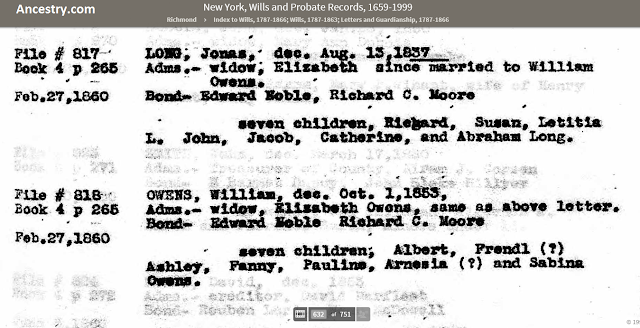 Seven children are listed for both men.  Richard is listed as the first child of Jonas Long.

I don't know why Elizabeth waited to probate these estates.  She died sometime between the 1860 census and her father's death in 1864.

Who were the parents of Jonas Long (died 1837)?  The discovery of five more of his children provide opportunities to uncover interactions with the Long side of the family.  If Jonas' son Jacob V P Long was named for Jacob Van Pelt, this could be a generation back on the Long line.

Where are Jonas Long and Elizabeth Merrell buried?  When did Elizabeth die?  Elizabeth's (second) husband, William Owens, is supposedly buried at the Merrell Cemetery in Bulls Head, Staten Island.  FindAGrave provides a date of death in 1852 with no picture of a headstone, while the estate index has 1853.

Why did Richard Merrell who died in Virginia in 1861 use his mother's surname and not his father's?  Why did he move to Virginia?  Were his children initially omitted from their great grandfather's estate?  Was contact lost because of the Civil War, or does their possible omission indicate that Richard Merrell was not a full sibling to the six Long children?

Thank you to the other researchers who helped bring this fractured branch together.