Two years ago I shared the discoveries found in the divorce records of my great grandparents, Howard Lutter (1889-1959) and Ethel Laurel Winterton (1891-1962).  Howard filed for divorce on October 27, 1926 in New Jersey on the grounds that Ethel had abandoned him and their two children.  Ethel did not respond.

Howard remarried to Fiorita Lorenz in on October 28, 1928 in New York City.  Fiorita herself was newly divorced from James Winnie.  Howard boarded at the home of Fiorita and James in the 1920s.  Fiorita testified on Howard's behalf in his divorce case, omitting that her current address was not with her husband but rather with Howard's mother.

Fiorita filed for divorce in 1927 alleging that her husband, James Winnie, committed adultery with Mildred L Yunker in Newark. 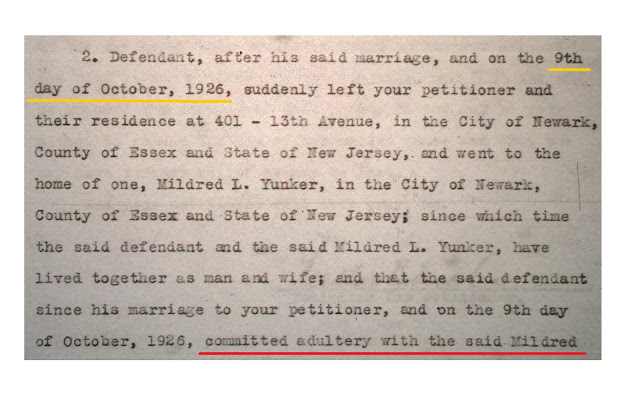 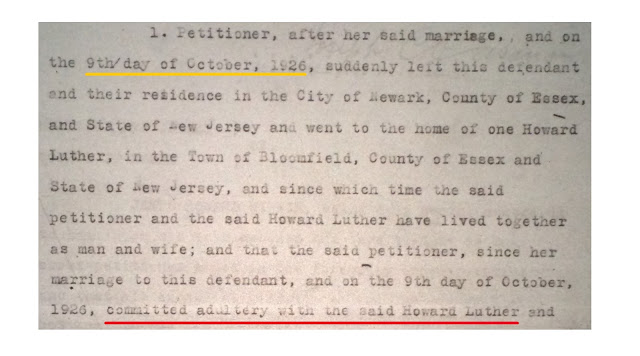 October 9, 1926 is the day of the break up claimed by Fiorita and James.  Howard Lutter filed for his divorce two weeks later.


In the 1930 census, James was living in Irvington with Laura M Winnie and stepson Clifford C Yunker.  I did not find a marriage record for them in New Jersey from 1928-1930.  [Note: Brocker was Mildred/Laura's former name.]

In 1930, Howard Lutter was living with Fiorita in Bloomfield with his two children, Clifford and Beryl, and one of hers, Rita.

You can read the divorce records for both couples at Dropbox.