A recent study finds that Americans are more likely to die on Christmas Day, December 25th, than any other day of the year.  (You can read an article about the study here.)  This conclusion was based on analysis of death certificates from 1979-2004.

Stephen C. Duryea died on December 25, 1893 in Jersey City.  He was 21 years old, unmarried, and died of pneumonia.  He was the 7th of 12 children and the 5th to die.  This must have been a very difficult time for his mother, especially since his father died six years earlier.  I discovered Stephen's death date upon finding the family plot at Sleepy Hollow Cemetery in Tarrytown, Westchester County, New York. 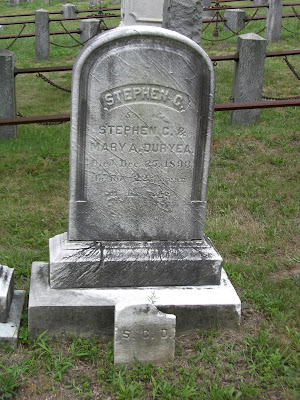 Jacob Duryea died on December 25, 1899.  His death took a while to uncover.  He appeared in the 1880 census in Hoboken.  His wife appeared without him, widowed, in the 1900 census.  At a local family history center, I searched microfilm rolls of death indexes year by year, starting in 1880.  On the last possible roll was Jacob's death.  He was buried at Hoboken Cemetery.  I visited his grave to find a bunch of family members buried with him.  The stone had fallen, but right side up. 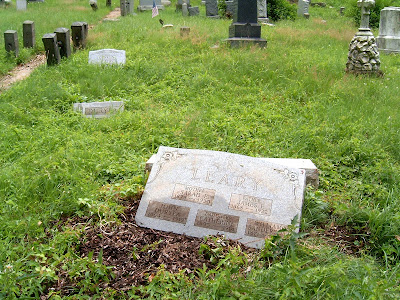 Hoboken Cemetery is not in Hoboken; it is in North Bergen, which is in Hudson County, not Bergen County.  There is a house by the entrance, but it does not contain a caretaker or records.  You may call Epstein Management for records at 201-867-0635.
Posted by Jody Lutter at 12:32 AM