Genetic Genealogy is again in the news because 23andMe has acquired a patent for their Family Inheritance Traits Calculator.  Some are criticizing this technology as enabling prospective parents to create designer babies and that this is wrong.

At 23andMe, both my parents have tested, so I can show you what Family Inheritance Traits Calculator looks like for two actual parents and their offspring.


You have two genetic instructions (genotype) for traits (except for the Y chromosome, which is not really relevant for our discussion here).  One gene is from your mother and one is from your father.  The trait that is shown in the offspring (phenotype) depends on how the genes interact with each other:  they can be dominant, co-dominant, or recessive.  (Or are expressed based on other factors that we need not bother with here.)

In biology class, you drew Punnett Squares to demonstrate the likelihood of possible traits for offspring of two parents.  Think:  Mendel's flowers.

And humans have been practicing mate selection since the beginning of time, consciously and subconsciously, favoring those with traits that promote survival and provide desired physical appearance.   People carefully select sperm donors and egg donors based on inheritable traits.  23andMe's Traits feature is really just a modern-day Punnett Square.  Labs can analyze DNA to reveal genotypes and then computers calculate traits in theoretical offspring.  The practice is not new- the technology is. 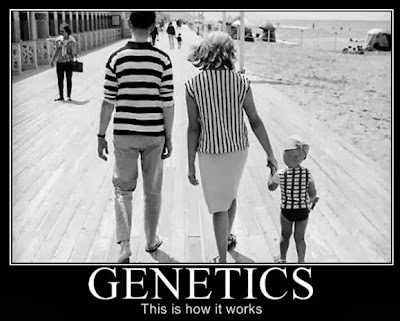