This is not the same as an ethnicity estimate.  Please see The DNA Geek's more elaborate explanation and discussion of Genetic Communities.

Ancestry.com's DNA test estimates my ethnicity as 56% Irish with no further breakdown.  [Living DNA provided a regional breakdown within England, but not Ireland.]

The Genetic Communities tool detects a heavy link among my DNA matches to people with roots in northern Ireland, or Ulster Irish.  The Irish is from my mother's side.  I have not determined a place of origin for most of her ancestors, but her great grandfather, Patrick Francis ODonnell (1856-1931) was from County Donegal, which is part of the region encompassed by Ulster on Ancestry's map. 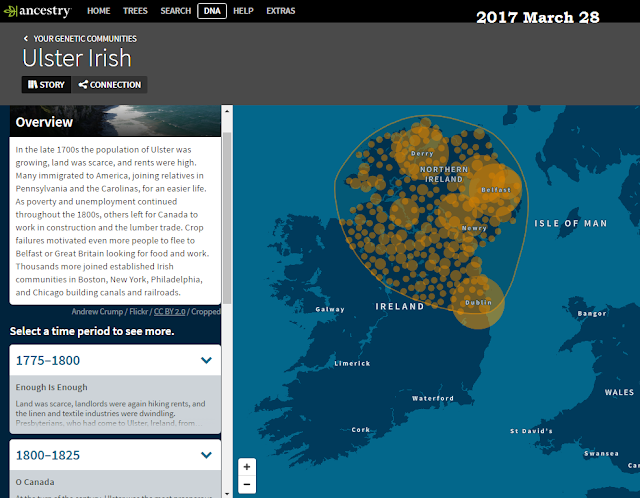 The other Genetic Community was a pleasant surprise because we are out of Europe and exactly where most of my father's ancestors were in the 1700s:  New York and New Jersey.  Early Settlers of New York tended to hail from certain areas of Europe, which is reflected in my father's ethnicity estimates.  Until the Genetic Community tool, there was no DNA-based connection to New York. 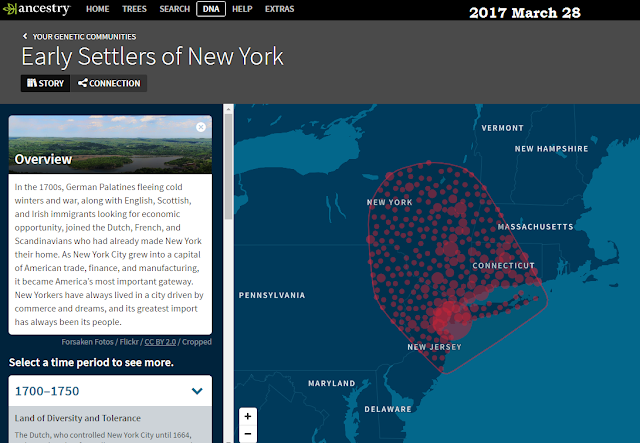 When trying to find the most recent common ancestor of a DNA match, you need a geographic connection.  In the match's family tree, the focus falls on branches who lived in the the New York area.  This New York Genetic Community provides support for this approach.